How Free is Free Will? 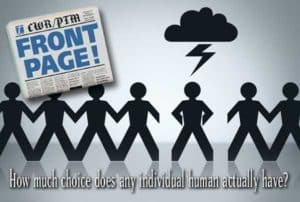 But how much of a choice do we really have? Are we all on a level playing field, or when it comes to responding favorably to God’s invitation do the odds favor some of us more than others?

1) I believe God provides an open invitation to all mankind—and that in some way, somehow, God will, in his perfect wisdom and love, eventually draw people to himself. Because of the cross of Christ, all are eventually invited to accept God’s love. However, all are not, at any moment in time, equally drawn by God’s grace to relationship in Christ. Therefore, all humans have free will, but at any given point in time, some are more free than others because God has drawn them, by his grace.

2) God’s grace draws us to Christ (see John 6:44 and 6:65). Drawn indicates some divine illumination, some impartation of light and understanding that was not there before. By virtue of our humanity, we have a spiritual genetic predisposition, we are “hard-wired” or at least incredibly attracted to religion rather than grace, like iron filings to a magnet. In order for us to unplug from wrong-headed notions, including the attraction that bad-news religion presents to us, and plug into God’s grace, God has to help prod us and “draw us.” In this regard, perhaps God’s grace is somewhat like a magnetic field.

When God “draws” us he graciously overcomes the spiritual inertia that holds us captive. So in drawing us I believe God, who is love, acts as the divine Lover. He pursues us and beckons to us (this in contrast with the religious idea that he is threatening to burn the hell out of us for all eternity, torturing us if we don’t comply with his wishes).

So, for example, when we as Christians classically use the word “repent” (as in turning from one behavior or action to another) how much of that action is directly and solely attributable to us and us alone? Can any human just decide to seek God one day, or does God have a part, even in the most elementary and initial part of our decision to seek him? I believe that God must draw us to himself—for by nature we are against God and his plan and his grace (Romans 8:7). God’s grace offends us.

God, when he draws us, starts to pursue us somewhat like a man pursues a woman, the object of his interest. Having made his intentions for us clear, God patiently waits for us to accept and receive his embrace.

All Are Invited, But All Are Not Responding
I believe that the gospel assures us, by virtue of the cross of Christ, that 1) all are or will be given the opportunity, an invitation if you wish, to relationship in and with Christ, and 2) in some way, somehow, all will be drawn by God. All, by virtue of the cross, are invited. In ways completely and absolutely known to God alone, he communicates an invitation, in his time and way, in a manner he determines as fair and equitable to humanity at large.

So while all are invited and all are welcome, there is absolutely no doubt, if we open our eyes and ears, that many in our world are living outside of Christ. They are “in the dark.” Are some people in the dark, and outside of life in Christ, because, while

God has invited everyone, he has not yet drawn them? Are they in the darkness, outside of the Light of Christ, because God has not yet started, for some reason unknown to us, to seriously court and woo them—to use the human expression of romantic love? Yes, I think we have to conclude that.

However, are some people walking in darkness because they have refused to be drawn by God’s overt and active interest in them, as he makes his invitation plain by drawing them? Have some actually rejected what God offers? Yes, based on the evidence of our world and what we have seen and heard and read, I think we have to conclude that some have or some seem to be rejecting him.

Next question. Of all the people who are outside of Christ, what percentage are living in darkness because, while Christ has died for all mankind and all are, or will be invited to be in Christ, God has not yet drawn them—and how many have been drawn by God in some way and yet have still rejected him? No one knows that number or percentage, of course.

Some believe that God will so relentlessly draw all to himself that in the end, everyone—100% of humanity—will accept God’s invitation. They seem to believe that God will not give up until everyone says “yes”—in this scenario some seem to think that the entire world, even the most obstinate, willful, and wrong-headed will eventually just get so tired of God’s constant “advances” that they give up, just to “get rid” of his constant attention. In this view, it seems to me that some believe that God will just eventually wear down every single last person who has ever lived. Based on what I read of the gospel, I can’t buy this idea. I wish it were so. I can hope for it, and I do. If God chooses to do such a thing, I will rejoice. But I can’t tell others to believe such a thing, because I don’t believe anyone can absolutely know such a thing for certain.

Given that the primary purpose of the gospel of Jesus Christ is extending an invitation to receive God’s love and given that God has infinite resources to convince and “woo” us, we can reasonably hope that most will, at some time and in some way, say “yes” to God.

However, the intimate and eternal relationship that God reveals and to which he invites us is not a forced relationship. There are no forced eternal marriages with God. We have a say. That means some will resist God’s gracious advances and reject him—no matter how relentlessly he pursues them. But I could be wrong. Check back with me when Jesus sits me down on the other side of eternity and sighs, and says, “Okay Greg—you had a few things right, but we need to go back to some basics.”