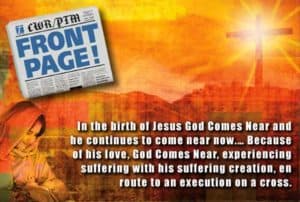 Imagine, for a moment, that you are part of a team building a skyscraper. Your team building this “high rise” would need, of course, a great deal of expertise to ensure that a sound foundation would be laid. Considerable expense and work is involved in preparing the foundation of any edifice that eventually soars majestically, hundreds of feet into the air.

Skyscrapers are incredibly heavy, so they must be built on much more durable foundations than smaller buildings. In virtually every case, a skyscraper requires a deep foundation, with pilings, drilled shafts and columns put in place using a pile driver—all reinforced by concrete.

When God prepared a spiritual building that would last forever, he carefully laid a foundation. The building of course is us, a spiritual temple in which God himself lives, in the person of Jesus. So in preparation for this spiritual building God planned a foundation that no man could lay, for the foundation for this spiritual edifice was (and is) Jesus, God in the flesh (1 Corinthians 3:11; Ephesians 2:20-22). Here are three foundational truths that flow out of the birth of Jesus—three absolutes upon which our faith rests:

1) The birth of Jesus proves that God Comes Near.
In the second chapter of Matthew, we read that Jesus, Joseph and Mary were visited by the Magi. Immediately after that an angel appeared to Joseph and told him to take Mary and Jesus, get out of Bethlehem and go to Egypt, because Herod had heard that a king would be born. Herod of course was the king. To ensure that he would get rid of any competitor to his throne he was going to kill all young boys age two years and under.

The first Christmas is not the kind of good-will Christmas we often celebrate. The first Christmas was not characterized by extensively decorated houses, church concerts, roaring fireplaces, eggnog and turkey dinners. The world into which Jesus was born was the real world—a world of brutality and mayhem. It was the world of despotic, egotistical power-hungry madmen—like Stalin, Hitler, Saddam Hussein, Osama bin-Laden, Idi Amin or Robert Mugabe.

It’s normal to wonder where God is when we despair of the horrific suffering in our world—when we see photographs of the suffering endured by victims of hurricanes and tornadoes, earthquakes and tsunamis—when we hear about the victims of nuclear melt-downs and the ravages of war.

We naturally ask if God cares when we hear about the horrors of sexual trafficking—when we hear of little children who are brutalized by adults, malnourished and devastated by disease. When we ask where God is in the midst of suffering, part of the answer is found in the birth of Jesus—signifying a time and way when God Comes Near. God, in Christ, could have been born into a walled village. Jesus could have been born into relative protective custody and safety. He could have been born into a much more germ-free, sterilized and hygienic place, but he was born in the debris and germs of a barnyard. He could have chosen middle class or upper middle class parents who were well educated, older, with a stable profession. But instead he chose an unmarried teenage girl to be his mother.

Why did he do this? He wanted to show us that there is no place or time that is too hostile or inhospitable that he is not willing to go. He is not only present in the peaceful suburbs, but in the inner city and on the battlefield. He is always there with us no matter how desperate or bleak our circumstances might be.
In the birth of Jesus God Comes Near and he continues to come near now. He is never far away, he is always right there next to you and me. He is approachable—he knows the circumstances in which you find yourself. He knows your frustration and your desperation. God knows because is close to us—he is, in Christ, one of us.

2) The coming of Jesus reveals the unbounded, unconditional love of God.

When God Comes Near he shows up in some of the most unexpected ways and unlikely people. Because of his love, God Comes Near, experiencing suffering with his suffering creation, en route to an execution on a cross.

Out of his love, God came to know the pain of betrayal—what it feels like when you lay down your life for your friends and they double-cross you and abandon you at the time of your greatest need. Out of his love for you and me, Jesus tasted what it’s like to be cheered by the crowd on one day, and then only a few days later to have the crowd demand your death.

Motivated by love, Jesus, with patience, mercy and grace put up with the impertinence, impatience, anger, moodiness, envy and immaturity of his disciples, and he still puts up with the same characteristics in you and me.

When tragedy strikes in your life, when tears run down your cheeks like a river, and when your heart feels like it has been shattered into a million pieces, God in Christ is right there, holding and hugging you, comforting you and loving you. Jesus, God in the flesh, came near to humanity to meet us in our pain, our shame, our guilt and our anxieties. When we descend to the deepest places of our lives, where we are so ashamed and where we despair of life itself, we find that God in Christ is there, with us.

Whatever dark night of the soul you have endured, or will endure in the future, there is no darkness that can overcome the love of God. By God’s love and grace, Jesus, the Light of the world, shines in our lives.

3) The birth of Jesus means that light will prevail over darkness. The light of Christ reveals that God Comes Near. Isaiah wrote many of the great prophesies of the birth of Jesus—let’s read one of them:

Our world can be a bleak and depressing place, filled with war and crime, hatred and animosity. Yet John, speaking of the eternal Word of God, who became Jesus, God in the flesh, tells us this:

In him was life, and that life was the light of all mankind. The light shines in the darkness, and the darkness has not overcome it.—John 1:4-5

And John records this teaching from Jesus:

When Jesus spoke again to the people, he said, “I am the light of the world. Whosoever follows me will never walk in darkness, but will have the light of life.”—John 8:12

In his first letter, John explains:
This is the message we have heard from him and declare to you: God is light; in him there is no darkness at all.—1 John 1:5

Are you looking for the true Light of the world this Christmas? Last year I saw a great music video, titled “Where’s the Line to See Jesus?” The lyrics tell of a little boy who was in the shopping mall at Christmas time. There, as little children waited in line to sit on Santa’s lap, the little boy tugged on his mother’s skirt and asked, “Where’s the line to see Jesus?”

The lyrics of the song reminded me that Jesus truly is the reason for the season. All the other stuff—all the parties, shopping, hustle and bustle, cooking, entertaining, decorations, Santa Claus, reindeer, buying gifts, sending cards, Christmas trees, mistletoe—all that stuff is not the center and core of a Christ-centered Christmas.

Some or most of that stuff can lead to darkness—we can eat too much, drink too much, spend too much and party too much—and when all is said and done, we might not have experienced Jesus. We can try to buy the love of friends and family with expensive gifts, and in a similar way as trying to buy God’s love with our performance, realize that it’s an empty and fruitless endeavor.

The parables and teachings of Jesus tell us that God loves parties and celebrations. The kingdom of heaven is a banquet, a wedding feast, a party for the prodigal child. It’s a love feast where everyone is welcome—a welcome home celebration hosted by God the Father, God the Son and God the Holy Spirit.

The kingdom of heaven is God’s party—he is at the very center of the laughter, dancing and feasting. He plans the party, he sends out the invitations, he hosts the party and he provides it. But it is his party—on his terms. We don’t define the party. We don’t determine who is on the invitation list, we don’t decide what’s on the menu, we don’t choose the music—our part is to make the choice as to whether we will attend. The celebration is all about Jesus. We celebrate him. This Christmas, get in line to see Jesus, for truly in Jesus, God Comes Near.