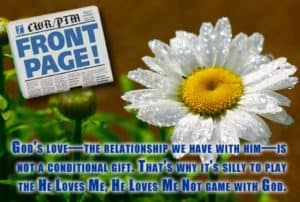 When you were in your early teens, just beginning to discover that the opposite sex existed, you may remember playing the game “He Loves Me, He Loves Me Not.” The game was all about “love” as we understood it at the time.

Back in the “olden days,” when we had a crush on someone, and we weren’t really sure whether they liked us or not, most of us were too reluctant and shy to find out by more direct means—like asking. Times have really changed haven’t they? Back then we would find a flower and begin to pull its petals, playing the He Loves Me, He Loves Me Not game. The last petal left on the flower answered the question, didn’t it?

If you’re a “little older” like me I’m sure you played that game more than once. I remember playing the game literally, and then, when I grew too old for using a flower to determine whether a girl liked me or not, I would resort to other, equally silly and superstitious ways of making that determination.

You know, many of us, without critically analyzing it, attempt to understand our relationship with God by playing a similar game with God. In this most important relationship we can ever have, we often convince ourselves that we’re not sure how God really feels about us, so we play a guessing game. We play the He Loves Me, He Loves Me Not game with God because we are convinced that his love is conditional. Even after we say we have initially accepted God’s love, we keep playing the game. We torture ourselves, continuously second-guessing God’s commitment to us as we ask ourselves questions like, “Does he still love me—especially after what I did last week?” We wonder whether he has forgiven us—this time.

So around and around we go. We think, “Well, he must love me because I had a good day—or a good week.” Then we pull another petal from the flower of the days of our lives. We think about yesterday—or the day before that—or the week before—and we realize that our behavior was unlovable. So we conclude, “He loves me not.”

God’s love—the relationship we have with him—is not a conditional gift. That’s why it’s silly to play the He Loves Me, He Loves Me Not game with God.

Because God loves you unconditionally, you don’t have to worry about what’s going to happen when you die. I don’t have to worry, thinking that when I show up, (let’s presume it’s at those metaphorical golden gates, and Peter is the gatekeeper) that Peter will check heaven’s computer database and say to me, “I’m sorry Greg, it seems like you had a reservation but it got cancelled.”

“Well,” you may say, “that sounds like wishful thinking —now you’re really taking this grace thing too far, in my opinion.” You may say, “What about all those people I see who are lying, cheating, committing adultery, drug taking, murdering derelicts—they’re gang bangers, they’re hate-filled, lust-driven, greedy, self-centered people?”

When it comes to knowing of God’s unconditional, limitless love for us, and when it comes to accepting and receiving that love (sometimes we might use the term “saved” for shorthand, but I feel that the word “saved” has religious baggage so I either avoid it or define it), four possibilities apply to all of us.

Whether we play the He Loves Me, He Loves Me Not religious game or not—all of us fall into one of these four categories:

1) People who have no idea that God loves them—but he loves them anyway. God’s love does not depend on whether people know about it, acknowledge it or seek it. God loves us whether we like it or not. We don’t know why God has not fully revealed himself to everyone so that they are assured of his love—but based on the evidence all around us we have to conclude he hasn’t. Many, if not most have not rejected God; they simply don’t know him at all.

3) People who believe that God loves them—but they are constantly worried about whether he still does. They are continuously torturing themselves as they play the game He Loves Me, He Loves Me Not. God already loves all the people who are playing the game.

4) People who, as Christ-followers, live in Christ and, by God’s grace, therefore have confidence and assurance that God really does love them. This is inner assurance, the same mindset as Christ Jesus (Philippians 2:5) we are given by God’s grace when we are resting in Christ. We are given the peace of God, which transcends all understanding (Philippians 4:7). Thus we are confident, not in our ability to please God, but in the work of Jesus Christ on our behalf.

What kind of people does God love? According to your Bible, all of them (which means all of us) because “them is us”! As we conclude let’s be reminded of some biblical examples of the kinds of people God loves:

• What about David, a murderer and an adulterer after God made him king, but who, by God’s grace, became the greatest king of Israel?

• What about the man who became an apostle proclaiming God’s grace to the world, yet when he was one of the closest of all of Jesus’ disciples, disowned and abandoned him? When Jesus was being tortured and beaten, the night before his crucifixion, Peter was asked if he was one of his followers—Peter cursed and swore that he had never known Jesus.