I Want to See 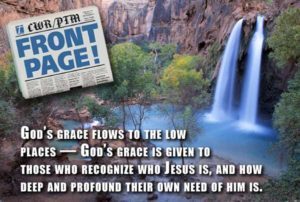 For the last time during his earthly ministry, Jesus was en route to Jerusalem. He had only a few days left in his earthly life—with every step he took toward Jerusalem he knew he was that much closer to the awful pain and suffering that awaited him. The road took him through Jericho, a city located about 17 miles northeast of Jerusalem. It was just before Passover—one of the three times in the year when pilgrims traveled to Jerusalem to celebrate the feasts of the old covenant. So the road was crowded with travelers, and as a result there were many others alongside the road—small businessmen and entrepreneurs, as well as beggars.

Mark 10:46-52 tells us that Jesus heard a cry as he walked through Jericho—”Jesus, Son of David, have mercy on me!” Many who were with Jesus told the man who was yelling to shut up. But the man persistently yelled even louder, “Son of David, have mercy on me!” Maybe these people who thought that they were helping and serving Jesus felt that their Master was far too busy and important to take time for a blind man.

Earlier in this chapter (Mark 10) we read the disciples had previously rebuked people who brought little children to Jesus—again, they assumed that they knew what was best for Jesus but Jesus rebuked the disciples who were misrepresenting him and said, “Let the little children come to me, and do not hinder them, for the kingdom of God belongs to such as these” (Mark 10:14).

This was not the first time—nor, sadly, was it the last time, when Jesus was misrepresented. It happens over and over and over again today—and has down through time—people who are supposed to be Christians act diametrically opposite to the way that Jesus would.

It was the same with the very people who were the closest to Jesus in his earthly ministry! Here in the 10th chapter of Mark we are reading about insiders—disciples and followers of Jesus—turning away a blind man and they actually thought in doing so that they were helping and serving Jesus.

How much more unlike Jesus could his followers have been? The very first sermon Jesus ever preached was in a synagogue in Nazareth (Luke 4:16-21), based on Isaiah 61:1-2, where Jesus is prophesied to, among other things, bring recovery of sight to the blind!

How ironic! How tragic! Healing the blind, both spiritually and physically, was central to the very mission and purpose of Jesus’ ministry—and yet his followers rebuked someone who was blind who wanted to be given his sight!

Jesus reacted to the request of Bartimaeus in the precise opposite way that those who seemed to be closest to him did. Jesus healed Bartimaeus, and immediately Bartimaeus joined the crowd following Jesus down the road to Jerusalem.

Bartimaeus believed—he was convicted that ultimate help and healing can only be found in Jesus. His faith was not about some religious deed he was able to bring before Jesus and thereby convince Jesus, by what he had done, what Jesus should in turn do for him.

The primary teaching of this passage for us is that Jesus will respond to all who persistently come to Jesus and believe that Jesus alone is the solution to their spiritual dilemma. Though the healing of Bartimaeus was physical, this story is not primarily about physical healing.

Bartimaeus had no pretenses as to his abilities to fend for himself. He had no idea that his righteousness was such that he could ask Jesus to reward him in return for all his religious performance. Bartimaeus was intimately aware of his own limitations—he knew his need—and he believed that Jesus, the Son of David, was the only one who could help him. That was the nature of his faith—may it also be the nature of our own. Faith alone, grace alone and Christ alone.