It’s Good to Be Alive 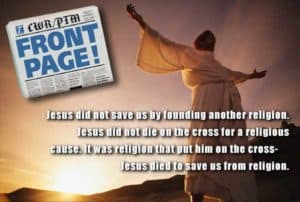 It’s one of two times in the year when brick-and-mortar churches have their highest attendance. It’s without a doubt the most meaningful time of the year for Christians, but Easter lilies, bunny rabbits, Easter hams, painted and chocolate eggs can take our attention away from the vital life-giving significance of this spiritual victory we celebrate every spring.

Easter signals new life springing from what is seemingly dead and lifeless. Gray gives way to green. Ice melts and snow is replaced by the promise of buds and sprouts. Light overcomes darkness. The light and life that comes bursting from an empty tomb triumphs over death on the cross, a stark, ugly instrument of torture and death.

Every spring we see a new creation story when God brings renewed hope into the darkness of our lives with the marvelous Light of his Son (Genesis 1:3-4; John 1:4-5). The Light of the world “rescued us from the dominion of darkness and brought us into the kingdom of the Son he loves, in whom we have redemption, the forgiveness of sins” (Colossians 1:13-14).

It was in the season of physical new life when Jesus lived out his passion, making atonement for us on his cross, and triumphing over the grave by rising from the tomb in which he had been buried. Christians celebrate Jesus’ conquest over death with the victory cry, “He is risen.” It’s our fight song, our rallying point, the center of our faith.

Every year “He is risen” reconfirms the glory of Jesus’ victory and reinforces the reality of the resurrection life he lives in those who believe in him and trust him implicitly (2 Corinthians 5:17; Galatians 2:20). He is not dead. He is alive!

The Creator of the universe (Colossians 1:16) entered into the womb of the Virgin Mary, being born into the world just as we are. He became one of his creation, dwelling and residing among us (John 1:14). He moved in next door, experiencing life just as we do.

Why did he come? 1) He came to rescue us because he loves us. 2) He died on the cross to reveal and demonstrate God’s love for you and me. 3) He came to fully reveal God so that we might know God and be given new and eternal life (John 17:3).

Who Really Killed Jesus?
Religion, from the day of Jesus’ birth to the day of his resurrection, was hostile to Jesus. Religion killed Jesus then, and it continues to war against authentic Christianity today (John 15:18-19; 16:2). From the birth of the body of Christ religion has attempted to eliminate Christ-centered Christianity by either killing Christ-followers or by misrepresenting and counterfeiting the teachings of Jesus Christ.

All religion, in any form, including religion that clothes itself with God’s name but denies his power, asserts the fundamental importance of human deeds, works and performance.

Religion is any system of belief and practice that assures us that our performance can gain us a higher standing with God than we would have otherwise enjoyed. That hypothesis is the polar opposite of the gospel and the enemy of the cross of Christ!

Religion is a pre-Christian innovation, a system of behaviors and practices that promises divine blessing in return for human obedience and fidelity. Religion existed long before the birth of our Lord. Religion was in large part the reason he came. And religion was very much a part of his cross—on his part and on the part of the human motive for killing him. Jesus came to signal the end of religion and the beginning of a new life, a life he brings to all of us, without cost.

Christianity is thus not a religion at all, but a way of life that is opposed to religion and all its potions and prescriptions. The history of Christ-less religion is filled with egocentric appeals persuading humans that they are the center of reality. Religion, at its core, is humanistic. Religion is attractive because it gives humans the illusion that they are in the driver’s seat, able to control their destiny, able to determine what God will think of them.

Religion, under any label or banner, enslaves its followers, addicting them to the idea that what they do can please and appease God. Religion, in the name of Jesus Christ, offers to improve upon what Jesus has done, to modify and even counterfeit him and thereby offering a false gospel and a bogus salvation.

An improved and modified Jesus is no Jesus at all. As C.S. Lewis once said, “No clever arrangement of bad eggs will make a good omelet.”

Jesus’ Victory—Given to Us
Religion that exists and even thrives within Christendom diminishes the importance of the life, death and resurrection of Jesus, as opposed to authentic Christianity which insists that Jesus Christ is ground zero of our lives. Religion serves an intoxicating and heady brew that bewitches humans (Galatians 3:1) into believing that human effort, performance and works are in the spotlight, at center stage of our relationship with God.

True Christianity points to the work of Jesus Christ alone as the only source of our salvation. Jesus alone, the Light of the world, is worthy to occupy the spotlight. Faith alone, grace alone, Christ alone. It’s all about him, not about us!

Jesus rescues us from a world that is groaning under the heavy burden of oppressive religion. Jesus’ glorious resurrection from the dead is also our glory, by God’s grace.

That’s why the passion of Jesus, culminating in Easter, Resurrection Sunday, is so important. That’s why “He is risen” is our victory cry. Jesus’ resurrection is a time for us to sharpen our eternal focus, consider the heavenly, ponder eternity and wrap our minds and hearts around the Chief Cornerstone of our faith (Ephesians 2:20).

Every spring as “life springs eternal” we think of Jerusalem, an old rugged cross and a tomb cut out of rock. They are both empty. He is risen! He is alive! Every spring God reminds us that eternal life does not come from any human source. Every spring is another divine announcement that religion is bankrupt and will one day be obliterated. “I did not see a temple in the city, because the Lord God Almighty and the Lamb are its temple” (Revelation 21:22).