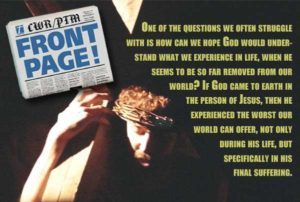 When Jesus came to the region of Caesarea Philippi, he asked his disciples, “Who do people say the Son of Man is?” They replied, “Some say John the Baptist; others say Elijah; and still others, Jeremiah or one of the prophets.” “But what about you?” he asked. “Who do you say I am?” (Matthew 16:13-15).

More than two thousand years ago, Jesus asked his closest disciples the same question that he has asked humans ever since. Who do you say that I am? The answer his disciples gave then, and that you and I give today, radically determines the direction of our lives.

Even those who have been skeptical of the claims that people have made of Jesus have been overwhelmed when they stopped to carefully examine his life.

One of the most famous Christian philosophers of the last century was C.S. Lewis, a professor of English at Oxford University in England. Schooled in the scholastic disciplines, he was an agnostic who denied that Jesus was anything more than a man.

But as he studied the person and words of Jesus, he also gradually came to the conviction that Jesus was more than just a man. Over the years he became one of the greatest Christian thinkers, writing many books, including Mere Christianity.

C.S. Lewis was not the only one who discovered that the evidence for determining the true identity of Jesus is found in looking at the uniqueness of Jesus. What made that one solitary life, lived so many years ago, so very different?

• JESUS’ ENTRANCE INTO OUR WORLD WAS UNIQUE:

The biblical account of Jesus’ birth affirms its uniqueness among all other births. In Luke chapter 1 we are told that Jesus was born of a virgin—absolutely impossible from a human perspective. But why would the gospel writers mention this unless it was important? Why would

Jesus need to be born of a virgin?

If Jesus was just a man, then all the talk about a virgin birth can safely be laid to rest. But if Jesus were more than a man, a virgin birth might make some sense. In John chapter 1, Jesus’ birth is foretold in a unique fashion.

In verse 14 we read, “The Word became flesh and made his dwelling among us. We have seen his glory, the glory of the One and Only, who came from the Father, full of grace and truth.”

God in the person of Jesus became the unique One and Only because of his love for us (John 3:16). Jesus was God with skin on—someone who allowed us to see the real heart of God up close and personal.

• THE LIFE JESUS LIVED AMONG US WAS UNIQUE:
Jesus’ public ministry only lasted three years, he had no formal schooling, yet his teaching was and is unique and powerful. What other man ever accomplished as much?

He ate and drank with the dregs of society—criminals, immoral people and social outcasts—and invited them to enter his kingdom. Without fully endorsing their lifestyles, he convinced them to follow his teachings, and they loved him for it. He touched lepers that no one else would go near, he showed mercy to those caught in immorality.

The life of Jesus is the story of the miraculous. He was known in his day as a healer—a miracle worker—not simply a teacher. Even his enemies had to agree that he could accomplish the miraculous.

Many people talk about life after death, but only Jesus could resurrect the dead by his own power. Furthermore, Jesus prophesied his own resurrection.

He claimed that he would be turned over to the authorities and suffer many things and then be killed, but on the third day would rise from the dead (Luke 9:22). He even prophesied the way in which he would die (Matthew 20:17-19).

Is it just possible that this Jesus was more than a man? The life Jesus lived was definitely unique from every other person who ever lived.
• THE CLAIMS JESUS MADE WHILE LIVING WERE UNIQUE:

Perhaps nothing incites either love or hatred of Jesus as do his claims. It is the claims of Jesus that separate people into one of two camps; those who believe them and those who reject them. Nearly everyone is willing to admit that Jesus was a fine man, a good man, even an extraordinary man. But many balk at calling him more than a man.

Jesus made exclusive statements: “I am the way and the truth and the life. No one comes to the Father except through me.” (John 14:6). Jesus didn’t say “I am one way,” or “I have some truth.” He claimed to be the only way—the only truth. This claim is either true or it is false.

He went beyond claiming to be absolute truth, and claimed to be God himself. In John 10:30 Jesus proclaimed, “I and the Father are one.” Some people try to maintain that Jesus wasn’t really saying he was God, and that he was just “spiritually united” with God, but the Jews who were present understood exactly what he was saying, and tried to stone him for blasphemy (John 10:33).

Rather than denying the claim, he bolstered it by asking religious authorities why they didn’t believe who he claimed to be, when he had performed so many miracles in their presence (John 10:36-38). After Jesus’ resurrection, he appeared to Thomas, one of his disciples. Though initially a doubter, when Thomas touched Jesus and confirmed that he was indeed alive and resurrected, he proclaimed to Jesus, “My Lord and my God!” (John 20:28).

Jesus did not tell Thomas he was getting carried away. Jesus did not say that he wasn’t really God. He accepted Thomas’ worship. If Jesus really was God, it would make sense for him to accept Thomas’ worship. But if Jesus was merely a good man who thought he was God and said so, then he was mentally imbalanced.

Jesus was either a liar, who knew he wasn’t God and lied about it, eliminating him from the possibility of being a good person, or he was a lunatic, who thought he was God, but wasn’t.

There is a third possibility; that Jesus was exactly who he said he was. If Jesus was truly God, who came to our world to live among us, then the claims are true.

• THE UNIQUE WAY JESUS LEFT OUR WORLD:
If someone claims to be God, they need to offer proof. This brings us to the unique way that Jesus left our world. Jesus was betrayed by one of his disciples, taken to a mock trial and sentenced to be crucified—exactly as he had foretold he would be. He was crucified on a hill with two other criminals.

One of the questions we often struggle with is how can we hope God would understand what we experience in life, when he seems to be so far removed from our world? If God came to earth in the person of Jesus, then he experienced the worst our world can offer, not only during his life, but specifically in his final suffering.

If this were the end of the story, it would be a tragic ending to an amazing life. But three days later, when the women came to finish his preparation for burial, his body was missing. He had said that he would die and after three days rise again, which is precisely what the Bible says happened.

Soon Jesus appeared to his disciples and they finally believed that he was who he had said he was, the Son of God.

Jesus didn’t just appear to his twelve disciples alone, but to more than five hundred of his disciples over a period of several weeks (John 20:26, 1 Corinthians 15:6). If his death were merely a hoax, simply producing a dead body would have put an end to it. But no one ever could.

If Jesus did rise from the dead, and came to die on purpose, to complete a divine rescue, then we can be safely assured that God really does love us.

• THE UNIQUE IMPACT HIS LIFE HAS HAD ON OTHERS DOWN THROUGH HISTORY:

The hope of eternal life that Jesus promised has changed the face of our civilization forever. Millions would die for this Jesus today. Many are willing to suffer martyrdom rather than renounce their faith in Jesus. Why? Because they know that this world is not all there is.

Millions of Christians around the world today follow Jesus of Nazareth. What other life has had such an impact? What could possibly account for this uniqueness? Could it be that this Jesus was truly the God-man, who came to earth to show us how to find our way home to the Father?

Could it really be true that “…God so loved the world that he gave his one and only Son, that whoever believes in him shall not perish but have eternal life. For God did not send his Son into the world to condemn the world, but to save the world through him” (John 3:16-17)?