I Am Making Everything New 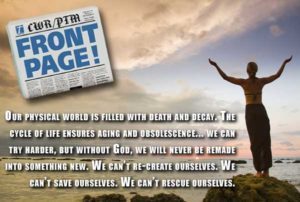 This is what the LORD says—your Redeemer, the Holy One of Israel:
“For your sake I will send to Babylon and bring down as fugitives all the Babylonians, in the ships in which they took pride.
I am the LORD, your Holy One, Israel’s Creator, your King.
This is what the LORD says—he who made a way through the sea, a path through the mighty waters, who drew out the chariots and horses, the army and reinforcements together, and they lay there, never to rise again, extinguished, snuffed out like a wick:
“Forget the former things; do not dwell on the past. See, I am doing a new thing! Now it springs up; do you not perceive it? I am making a way in the desert and streams in the wasteland. The wild animals honor me, the jackals and the owls, because I provide water in the desert and streams in the wasteland, to give drink to my people, my chosen, the people I formed for myself that they may proclaim my praise.”—Isaiah 43:14-21

He who was seated on the throne said, “I am making everything new!”—Revelation 21:5

Paul says in 2 Corinthians 5:17 …if anyone is in Christ, he is a new creation; the old has gone, the new has come!

Our passage in Isaiah explains that new life is given to the creation, to people and things in desperate need. The whole creation needs the new life of Jesus’ resurrection.

God is in the salvation business. He is in the reclamation and restoration business. God takes stuff and people who have been discarded, thrown away and junked and breathes new life into them.

Our passages from Isaiah (I make all things new) and Revelation (I am making everything new!) are concise summaries of the entire gospel.

Our physical world is filled with death and decay. The cycle of life ensures aging and obsolescence. You buy a shiny new car and five years later it looks like it has been through a war. You move into a new house and you try to maintain it, take care of the plants and lawn, keep the house painted—but sometimes, in spite of your best efforts, given the time you have, the house seems to start falling apart around you.

You buy a new computer, only to find out a few years later that it is now obsolete. Or, you discover that your still “new” computer needs new software—it needs updating. How convenient for software companies!

But while everything physical ages and deteriorates, God makes all things new.

In order to picture what God is doing, we have to see though his eyeglasses and share his vision. As Bobby Kennedy used to say, “Some men see things the way they are and ask ‘why?’ I prefer to dream things that never have been and ask ‘why not?'”

Human lives can seem like discarded objects found in trash cans and junk heaps. Our lives are corroded and coated with layers of filth, dust and grime. Our lives are filled with anger, bitterness, lust, envy, jealousy and hatred. We aren’t a pretty picture, but God loves us anyway, and instead of walking away from us, God says, I Am Making Everything New.

God sees past all the layers of grime and dust. He sees past the scars and the pain, and he sees what he can make of us. He sees how we can become what Paul calls his handiwork or his workmanship (Ephesians 2:10).

In his book, Rascals in Paradise, James Michener recounts a true story about an astute Australian man who, in the 1930s, saw that a great war was going to break out in Europe and that it would engulf the whole world. He believed that this war would spread from Europe into the Middle East, then into Asia, and from Southeast Asia into Australia.

He carefully studied a variety of geographical locations which would afford him and his family physical safety and security. He considered the interior of Australia, interior and remote regions of Canada and the United States—but after studying all of the factors, he decided that the best chance for safety and security would be on some remote island in the Pacific Ocean.

So he systematically studied the Pacific islands. Finally, in the summer of 1939, one week before Germany invaded Poland, this forward-looking Australian took his family and fled to his own chosen island.

He and his family were ready to start their new life—they had done their homework, and this was the most secure and safe place on earth. He had done his best to locate a safe place. He moved to an almost unheard of island in the chain of islands called the Solomon islands—its name was Guadalcanal.

If you are unfamiliar with the history of World War II, let me tell you the significance of Guadalcanal. The Battle of Guadalcanal took place between August 1942 and February 1943—just three years after this Australian and his family had moved there, believing it to be the safest place on earth.

This battle was one of the most fierce and bloody battles of World War II during which the Allied forces, including military forces from the United States, Canada, United Kingdom, New Zealand and Australia prevailed against the Imperial Japanese forces.

It was the first significant victory for the Allied forces over Japan in the Pacific, and is seen by some as the turning point in the war. It was a battle of attrition, with enormous loss of life. By the end of this one six-month battle, over 7,000 Allied soldiers and over 29,000 Japanese had died. You may be familiar with the most recent movie that told the story of the Battle of Guadalcanal, the 1998 movie was titled, The Thin Red Line.

In spite of the heroic efforts, monumental and painstaking research, careful planning, and plain old hard work—the place of refuge and safety (according to the Australian and his family) turned out to be anything but. They moved to what they thought would be a place of new life—but instead it was a place of unbelievable carnage and death.

We realize, as Christians, that our best efforts are not enough. We do not have the capability of finding and locating a safe place—a place of new life. But God does.

That’s what his grace is all about.

When we think of people who are spiritually disenfranchised from God—people who are held in spiritual bondage—people who are captives and who live with enormous pain and suffering—we can have confidence that God is in the business of redeeming and restoring them.

Have you ever considered all the “re” words in the Bible? There are many “re” words of course—but here’s my top eleven, in alphabetical order (I tried to limit myself to ten, but I couldn’t!):

1) Rebirth: The miracle that imparts new, eternal life to those who completely trust in and accept Jesus Christ, without qualification. The act of God that makes us his very own children, heirs of his kingdom.

3) Redemption: Jesus’ payment of the debt of our sins by his precious blood. Redemption is the necessary payment to buy back the life of a spiritual slave who may, ironically, think they are free, but in reality is in bondage to legalistic religion.

4) Regeneration: The progressive work of the Holy Spirit in shaping and molding us to be more like Jesus and less like our human selves. The ongoing work whereby God transforms us and through which we become his workmanship.

5) Relationship: The dynamic experience through which we are connected with God, in and through his love. A personal communion, a co-union, in which we come to know God. Our relationship with God is not merely knowing facts about him, but knowing him in an intimate way. The degree of intimacy involved in knowing God spiritually is somewhat like the way Bible uses the word “know” to speak of the physical, intimate relationship between a man and a woman.

6) Remission of sins: Release from the bondage and slavery of sin.

7) Renewal: A refreshing, reawakening or resurrection—and sometimes all three—of that which is mortal and in the process of decay, to life eternal.

8) Repentance: A gift of God which allows a human, who naturally is opposed to God, to renounce independence from God, to turn to God and trust in Jesus Christ.

9) Restoration: The act of God in cleansing the creation from sin and corruption—the new heavens and the new earth.

10) Resurrection: The divine miracle of breathing life into a body that was dead.

11) Revelation: Not only a book in the Bible, but the divine self disclosure—the actions of God in making himself known to us, most importantly in and through Jesus Christ.

One of the great themes of the Easter story, which we revisit every year, is the fact of new life. It’s our annual reminder of God making something new, of God raising a dead, decomposing body to life.

One of the great lines in the Bible that describes the resurrection is of that great stone—that boulder—that had been placed in front of the tomb of Jesus so that no one would be able to steal his body, and then claim that he had been resurrected. When the women came to the tomb on Resurrection Sunday, they found that the stone had been rolled back. Such a thing was impossible for man, but with God all things are possible. The stone was rolled back. And that message enables us to realize the central message of Easter—because he lives so we shall live as well.

We conclude with this passage from Revelation 21:1-5:

Then I saw a new heaven and a new earth, for the first heaven and the first earth had passed away, and there was no longer any sea. I saw the Holy City, the new Jerusalem, coming down out of heaven from God, prepared as a bride beautifully dressed for her husband. And I heard a loud voice from the throne saying, “Now the dwelling of God is with men and he will live with them. They will be his people, and God himself will be with them and be their God. He will wipe every tear from their eyes. There will be no more death or mourning or crying or pain, for the old order of things has passed away.” He who was seated on the throne said, “I am making everything new!”

The first heaven and the first earth have been corrupted and perverted. They’re going to be destroyed and recreated—God will make all things new and that new life is not just a future event to which we look forward, but it has been happening since the resurrection of our Lord and Savior.

God is making all things new, in and through Jesus Christ, who is the same yesterday, today and forever.