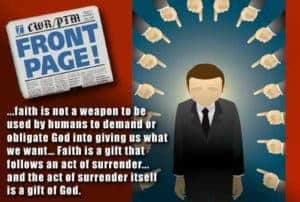 Many churches and ministries today claim that God heals everyone who requests relief of physical afflictions, as long as they ask in faith. This assertion is made on the assumption that Jesus’ death on the cross, his atonement, was for both “spiritual” and “physical” sins.

Further, some even claim physical healing is a “right” that one who is doing all of the things that God commands and demands might “claim” from God. Some call this claim a “prayer of positive confession.” Others who have reservations about this practice believe it to be naive and perhaps superstitious and thus call the practice “name it and claim it.”

Of course, since the vast majority of those who “ask in faith” are not granted the miraculous interventions they request (or “claim”) allowance is made for them—they either do not have “enough” faith or they may have some “secret sin” that they are hiding from God. Thus, when healing prayer is not answered, faith healers often blame those who are praying for having sins that “prevent God” from answering the prayer. And, of course, given the image of a harsh, stern God that many have, the idea that God would not grant physical healing unless and until all religious demands are met and fulfilled is not seen as far-fetched.

Many faith healers cite biblical proof texts such as Isaiah 53:5, Matthew 8:16-17 and 1 Peter 2:24 as evidence that we are healed by the wounds the Messiah endured …”by whose stripes we are healed” (1 Peter 2:24). However, in each of these cases the intent of the original language was to stress spiritual healing rather than physical.

Following this line of reasoning, if the atonement of Christ on the cross is for the resolution and healing of our physical illnesses, injuries and diseases just as it is for our spiritual reconciliation with our heavenly Father, then all bodily disorders and dysfunctions suffered by humans must be the immediate consequence of penalties for bad behavior.

But there is much suffering (easily seen in the lives of little “innocent” children) that is endured because someone else caused it, and that someone might be long since deceased. Some suffering is also the result of time and chance accidents. Some suffering is the consequence of aggressive and hateful acts taken against the person of the individual who is now suffering.

Indeed, any attempt to remove all suffering from the life of one who follows Christ is not only preposterous, it is a distortion of the call of Jesus. Jesus clearly calls his followers to suffer with him (Matthew 16:24)—it’s often been said that Jesus never promises to keep us safe and immune from suffering, but he does promise to always be with us during our suffering and trials.

Fear/Distrust of the Medical Profession

Many faith healers openly scoff at the medical profession and link it to sorcery and similar pagan practices condemned in the Old Testament. Faith healers will often say that total reliance on faith healing is necessary to please God.

However, extreme, unreasonable reliance on faith healing can lead many to shun and even fear the medical profession and the help it may give. In many cases ill-advised choices, due to fear of the medical profession, have been the precursor to horrible consequences (including premature death) that would have been avoided had medical help been requested.

Faith healers who seem to insist that their beliefs are closer and more faithful to the teachings of Jesus than those who seek medical assistance are absolutely ignorant of one of the primary legacies of Christ-followers.

The early history of Christianity reveals the disciples of Jesus following the practice of Jesus as they ministered to those who were spiritually impoverished, homeless and ill-nourished, as well as to physical needs. St. Luke was a beloved physician.

In the first few centuries of Christianity, in spite of incredible persecution, individual Christ followers, sometimes in small groups and at times in larger ones, worked together to assist those in spiritual and physical need. Many of the early (and somewhat primitive by today’s standards) advances in a Christ-centered approach to the healing arts can be traced to early Christian believers.

As Christianity grew, so too did an emphasis on reaching out to those who were diseased and sick. Christians were at the heart and core of early efforts to found healing centers of all kinds—including homes for the poor, orphans and aged. The practice, art and science of the healing arts grew so that hospitals, old age homes and sanatoriums (many were dedicated to care and ministry for those who suffered from highly communicable diseases such as leprosy) were founded. This same emphasis continues to this very day.

For faith healers to brazenly attack those who give their lives to healing seems to be an attack on the emphasis Jesus himself gave to Christ-followers. A careful reading of the New Testament reveals that the body of Christ can easily be understood as a hospital whereby those in need receive care and nourishment, rather than becoming a museum dedicated to dead religion. In one of his most loved and remembered parables Jesus portrays himself as the Good Samaritan (Luke 10:25-37) who comes to the aid of a suffering person, in contrast with two self-absorbed religious professionals who carefully avoided the person who has been beaten by robbers and left “half dead” (Luke 10:30) and “passed by on the other side” of the road (Luke 10:31-32).

What a sad commentary that these two religious authorities were probably on their way “to church” to continue their never-ending commitment to rituals whose performance they believed would earn God’s commendations. These two spiritual navel-gazers were blinded by their legalistic tunnel vision, and could not recognize the real need of the suffering person lying in the road upon which they, too, were traveling.

It is this ministry of healing, this humble behind-the-scenes ministry of individual Christians, that has helped provide the momentum and foundation for organized healing and care institutions of our own day. No flashy healing crusade—no line upon line of wheelchair-bound individuals waiting for a miracle from a doctor/surgeon/oncologist (or for that matter a faith healer), but simply individuals who give of their time and talents to serve the needs of the sick and impoverished.

As we consider some of the evidences that are often offered for the miracle claims of faith healers, we might remember the following observation offered by John Dominic Crossan:

I have visited Lourdes in France and Fatima in Portugal, healing shrines of the Christian Virgin Mary. I have also visited Epidaurus in Greece and Pergamum in Turkey, shrines of the pagan god Asklepios.The miraculous healings recorded in both places were remarkably the same. There are, for example, many crutches hanging in the grotto of Lourdes, mute witness to those who arrived lame and left whole. There are, however, no prosthetic limbs among them, no witness to paraplegics whose lost limbs were restored.

Whose Faith Heals the Sick?

The faith the Bible speaks of as being a part of “healing prayer” (James 5:15) is not faith that has any human origin. Faith is a gift of God—it is not the product of human effort, for if it were it would lead to boasting about spiritual superiority on the part of the one whose prayers are answered more often. When such boasting happens (and it does!) the faith that is being discussed is not the gift of God!

The Bible clearly teaches that faith is not a weapon to be used by humans to demand or obligate God into giving us what we want. Faith is not a tool by which we cast aside reason and belief in a vain attempt to subject God to our desires. Faith is a gift that follows an act of surrender on our part, and the act of surrender itself is a gift of God, whereby we repent and instead of trusting in ourselves or any other human endeavor, we trust in him.

Faith involves the surrender of one’s abilities to take care of all their needs, and instead, throwing oneself at the foot of the cross of Christ proclaiming that God and God alone can do what we humans are incapable of. Faith is not a product of human effort, thought, divination or creation of any kind—faith does not come from the person who believes in Jesus, but rather from the all-surpassing ability of our Lord and Savior. It is not the profession or act of faith that heals or delivers, but rather the Object of faith.