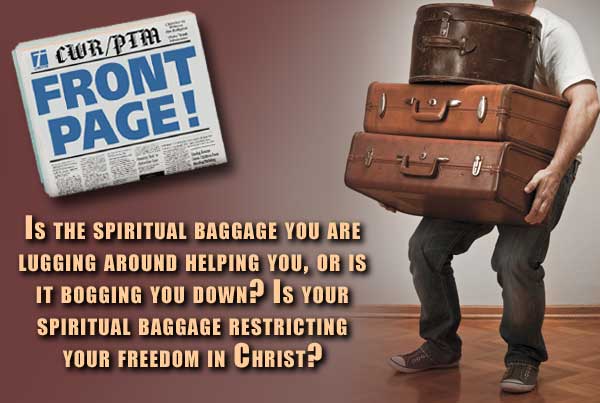 Bel bows down, Nebo stoops low; their idols are born by beasts of burden.
The images that are carried about are burdensome, a burden for the weary.
They stoop and bow down together; unable to rescue the burden, they themselves go off into captivity.
“Listen to me, O house of Jacob, all you who remain of the house of Israel, you whom I have upheld since you were conceived, and have carried since your birth.
Even to your old age and gray hairs I am he, I am he who will sustain you. I have made you and I will carry you; I will sustain you and I will rescue you.” —Isaiah 46:1-4

If you have flown commercially lately, for business or pleasure, you know that airline travel has become much more difficult than it used to be. Even if you haven’t traveled on an airline lately, you probably have heard that airlines have added lots of extra charges.

Some airlines are now carefully weighing and measuring your checked luggage. I guess they have to, considering the stuff some people try to cart on board. When it comes to our relationship with God, religion can become just so much carry-on baggage. It can drag us down. It can seem to be so necessary, so important, so vital and so spiritual, but religion can seriously burden and impair our relationship with God.

Let’s talk about No Carry-On Baggage Allowed. In our keynote passage in Isaiah God describes the fundamental difference between the relationship he invites us to have with him, by his grace, and the relationship we may have with a religious institution—with religious buildings, creeds and dogmas, ceremonies and rituals.

What is that fundamental difference? When the rubber hits the highway, when push comes to shove, the difference between religion and an authentic relationship with God comes down to this:

Religion—and all of its devices—is unable to rescue us from our burdens. Religion is unable to keep us from becoming a captive—an addict—a spiritual slave. In fact, oppressive religion itself is a captive—like a drug addict it must push the drug which enslaved it so that it may continue its own addiction. It’s selling you and me into addiction in order to feed its own habit. Religion can’t carry us—we have to carry it!

The idols Isaiah talked about in the first verse of our keynote passage were well known gods of Babylon. Bel is a word that means “lord”—the Babylonian equivalent of Baal, the Canaanite god whose name is mentioned so often earlier in the history of the nation of Israel. The Babylonian god Bel was probably another name for Marduk, reputed to be the most powerful of all the Babylonian gods.

Nebo, in the Babylonian religion, was the son of Bel or Marduk, the god of learning and writing. We might say that the modern day equivalent of Nebo is the information age, the computer, the information highway of the Internet, the microprocessor which promises the dawn of a new age, holding out the hope of deliverance from ignorance and superstition.

When the time of captivity came for the nation of Babylon their gods were powerless. The gods of Babylon were loaded, like lap-top computers, as carry-on baggage on beasts of burden—camels and donkeys—the ancient equivalent of today’s transportation, including modern passenger jets.

God says that these idols, these created things that the people had been deceived into thinking had some power in their lives, are impotent. Actually, religious idols, symbols and icons are not only powerless, they are a liability. Religious idols can become a burden, so much excess baggage, bogging down those who carry them around. Ironically, people believe that the cherished religious symbol or idol that so weighs them down has some magical power in their lives.

God says, in verse two of our passage, that instead of saving people at times of pain and destruction, the gods themselves must be carried and borne! Religion can’t carry us—religion itself has to be carried by those it enslaves.

The context of this passage is of an empire over which these two powerful gods were believed to rule—an empire that was falling apart at the seams. Their statues are taken down and placed on beasts of burden. The religious gods of Babylon are thus revealed to have no power, they themselves are simply burdens to be borne.

Religious gods become just one more burden for people, excess baggage that bogs down the lives of those who are still convinced that these gods still deserve their obedience and worship.

Religious gods often don’t seem to be a burden—they can seem to be a blessing—they can seem to us to be something we absolutely cannot live without.
I’ve been on more than one airplane, seated, watching other passengers board the plane. As they board they walk down the center aisle wrestling with armloads of baggage, often colliding with heads and arms of already seated passengers as they inch down the aisle.

I’ve wondered, as I have watched when someone stopped at a seat ahead of me, how in the world they could cram all that stuff in the overhead compartment, or under the seat in front of them. Their time-consuming efforts to jam all of their carry-on baggage into every available nook and corner impede the boarding process. Others have to wait, as flight attendants assist in storing excess carry-on baggage throughout the airplane.

I don’t mean to judge these folks harshly, for they probably felt that all the stuff they carried was absolutely necessary for their trip. They may have felt that what they were carrying was absolutely vital for them to have with them, close by, in case of emergency. But this everyday illustration, played out on airplanes around the world, does portray a real side of our human nature. We are reluctant to let go of anything, physical or spiritual. We lug around stuff that we may not need and often wind up serving our own possessions. Our possessions can wind up possessing us.

What is God’s answer to our religious dilemma? What does God tell us to do about the religious burdens that weigh us down? Notice my emphasis in verses 3 and 4 of our passage —Isaiah 46:

Note, in verse 4—I AM HE. I AM HE. The great I AM—the eternal God, the God who came down to us in the person of Jesus, who as Jesus, God in the flesh, told us that he was and is the great I AM. The great I AM also tells us this, speaking of the excess religious baggage we are carrying around (and again, note my emphasis);

Come to me, all you who are weary and burdened, and I will give you rest. Take my yoke upon you and learn from me, for I am gentle and humble in heart, and you will find rest for your souls. For my yoke is easy and my burden is light (Matthew 11:28-30).

The great I AM loves us beyond our wildest imaginations, loving us in-spite of who and what we have been and done, loving us no-matter-what. Religion and all of its legalisms places burdens on us, depressing us, overwhelming us, and in the end, causing us to despair of life itself.

God’s love is a love that cannot be brokered, it can’t be gained or earned as a result of human performance. God’s love cannot be humanly gained nor can it be humanly lost. God’s love is deeper, more gentle, more gracious, more capable, more all-encompassing, than we would ever, on the strength of our human imagination alone, dare to dream.

Jesus, out of his love, carries our burdens. He meets us at the jetway that leads to God’s airline of grace, and asks us what it is we are carrying, what it is that we are attempting to drag along into our relationship with him. He says, “You won’t be needing that stuff on my airline. I’ll take care of the problems that concern you, the pain that haunts you, the depression that overwhelms you, and the guilt and shame that drag you down. I will take care of it, all of it.”

But so often we cling to our religious stuff, protesting, “But Jesus—look at all the stuff I’m carrying. Look at this plaque of the Ten Commandments. I hang that up in my house. I keep your laws. I obey them.”

We continue to search through our carry-on luggage to justify ourselves before Jesus, “Look at this, it’s my membership certificate for my church. My church, as you know, has been around for centuries, it’s got all of the right doctrines and creeds. Thousands come to my church every weekend. My pastor has two doctor’s degrees. My pastor is a Christian celebrity. My church is purpose-driven, on track, committed, evangelistic, pro-life, anti-homosexual, against liberalism and pro-war. Aren’t you proud of me and my church?”

We think we see Jesus looking a little disinterested, so we remind him, “I am so thankful I am a member of my church and not like all those other people who belong to some sad, pathetic little church. I know you have a special place in heaven for people in my church, because we’re the best church, or at least in the top ten. And look at all the trophies and ribbons I’ve got. Look at this one, it’s for faithful tithing. This one is for being baptized, at the right time and in the right way. This one is for only watching clean, family programs on television. This one is for Sunday school attendance, 25 years without missing a Sunday. These are your laws Jesus, these are your traditions, I need them. They help me. This isn’t excess baggage—this stuff is absolutely necessary for my trip.”

It is true, as Jesus tells us in Matthew, we are given spiritual baggage when we board the plane of God’s grace, but that baggage is light. The light burden of Jesus is not some requirement or deed that will allow us to pay for our ticket on the airline of God’s grace. Our ticket is free. Our seat has already been paid for.

The price that was paid was so steep that no human could ever, in a gazillion years, earn enough spiritual brownie points before God to pay for the right to board the airline of God’s grace.

Our journey with God is given to us, by his grace. We surrender everything, as the great, classic hymn goes, we surrender ALL when we board God’s airline of grace.

Carrying stuff, thinking that our stuff will somehow increase our standing with God is religious legalism. It is a lie. It is a travesty. Legalistic carry-on baggage can be all about a relationship with religion, with an organization, a building, with a set of rules and regulations, with a group of fellow human beings.

Being carried is God’s grace. Accepting Jesus, and his light burden, and the free seat on God’s airline of grace, is real relationship with God. Get rid of your religious carry-on baggage, let him carry you! Accepting Jesus is true fellowship with God. True freedom in Christ, a living and abiding relationship that springs out of our inner being, is because of Jesus, our risen Lord, who lives his life within us.