Righteousness by Law or by Faith? 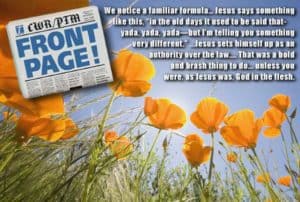 Do not think that I have come to abolish the Law or the Prophets; I have not come to abolish them but to fulfill them. I tell you the truth, until heaven and earth disappear, not the smallest letter, not the least stroke of a pen, will by any means disappear from the Law until everything is accomplished. Anyone who breaks one of the least of these commandments and teaches others to do the same will be called least in the kingdom of heaven, but whoever practices and teaches these commands will be called great in the kingdom of heaven. For I tell you that unless your righteousness surpasses that of the Pharisees and the teachers of the law, you will certainly not enter the kingdom of heaven.—Matthew 5:17-20.

There’s an old story about a young man who asked his rich grandfather, “Grandpa, how did you get so rich?” “Well,” said grandpa, “during the Great Depression my family had no money whatsoever. I found two pennies in my old piggy bank, and I bought an apple with those two pennies. I shined that apple up, took it out on the street where people were hungry, and sold it for five cents. Then I took that nickel and bought two more apples for two cents each. I shined them all up, took them back out on the street, and sold them for five cents each.”

The grandfather paused, and then continued, “That was my first real job. I did real well selling apples during the Depression.”

There are two ways to become a millionaire: 1) through your own hard work—in this case, buying and selling apples, and 2) because someone gives you something you do not earn.

We’re going to talk about becoming a spiritual millionaire today in our message titled, Righteousness by Law… Or by Faith?

The teaching of Jesus, in what is called the Sermon on the Mount, provides the springboard for answering the question posed by our title, and as we answer that question, we’re going to base our discussion on two foundational principles:

1) The Grace of Our Lord, as Evidenced in the Cross of Christ

2) Understanding the Bible From a Christ-Centered Perspective

So, as we consider our keynote passage, let’s ask ourselves, is Jesus saying that he is intensifying the requirements for obedience so that Christians are required to surpass the righteousness of the Pharisees and the teachers of the law?

It sure looks that way, doesn’t it? If you haven’t read the rest of the New Testament, if you haven’t heard the gospel of Jesus Christ, then you may conclude that Jesus is laying down, forgive the expression, “the law.”

Had his original audience understood Jesus’ words in that way, they may have thought that Jesus was following the counsel of the young men who surrounded King Rehoboam. Rehoboam was the son of King Solomon of Israel, and as he succeeded his father as king, the people of Israel asked him to lighten the harsh labor conditions Solomon had imposed on them.

The elders advised Rehoboam to lighten the load of the people. But…

The young men who had grown up with him replied, “Tell these people who have said to you, ‘Your father put a heavy yoke on us, but make our yoke lighter’—tell them, ‘My little finger is thicker than my father’s waist. My father laid on you a heavy yoke; I will make it even heavier. My father scourged you with whips; I will scourge you with scorpions.'”—I Kings 12:10-11

Is this a similar passage to Jesus’ teaching in our keynote passage? Some actually believe Jesus was saying “you know, the old covenant was tough, but you ain’t seen nothing yet. Wait until you see how tough I’m going to make it for you under the terms of the new covenant!” Is that the message behind Matthew 5:17-20?

One of the guiding, fundamental principles of Bible study is to read a passage in its context. Always avoid taking a few verses from a chapter and book of the Bible, and then applying some grand, sweeping conclusion to those verses.

I have already mentioned two other guiding principles, let’s keep them in mind as well:

1) The Grace of Our Lord, as Evidenced in the Cross of Christ
2) Understanding the Bible From a Christ-Centered Perspective

First of all, let’s get the context. Our passage is near the beginning of the first chapter of the three chapters of Matthew—five, six and seven, that we call The Sermon on the Mount.

What follows, in context, our keynote passage? Let’s preview the rest of chapter five:

An antithetical statement is a direct contrast of conflicting ideas, concepts or statements that are in opposition.

You might say, in frustration, “You say it’s three miles south—I say it’s three miles north!” That’s an antithetical statement, a direct contrast, a contradiction, if you like.
Without discussing the substance of each of Jesus’ counter-claims, his contrasts if you like, here are the introductory comments for the six antithetical statements that Jesus makes, immediately following our keynote passage:

In each one of these antithetical statements Jesus sets himself up as an authority over the law of the old covenant. That was a bold and brash thing to do, especially to that audience, unless you were, as Jesus was, God in the flesh.

We notice a familiar formula when he sets up the antithetical statements. Jesus says something like this, “in the old days it used to be said that—yada, yada, yada—but I’m telling you something very different.”

And then, on top of these six antithetical statements, all framed within Jesus’ earlier imperative that in order to enter his kingdom of heaven our righteousness must surpass that of the Pharisees and the teachers of the law (Matthew 5:20), Jesus puts the icing on the cake. As this chapter concludes, as Jesus finishes this major portion of teaching in what we call the Sermon on the Mount, we read,

“Be perfect, therefore, as your heavenly Father is perfect.”—Matthew 5:48

Now, let’s return, with this context in mind, to our two overriding, fundamental points that will help us to understand what Jesus is saying, and what he isn’t:

1) The Grace of Our Lord, as Evidenced in the Cross of Christ
2) Understanding the Bible From a Christ-Centered Perspective

When was the Sermon on the Mount given, and to whom? It was given to Jesus’ disciples, before the Cross of Christ.

How then do we understand Jesus’ instruction in our keynote passage, together with his six antithetical statements that follow, concluded by the last verse of this chapter, in 5:48?

Jesus is demonstrating the impossibility of pleasing God with righteousness based on law.

His antithetical statements are exaggerations—impossible demands in the light of human imperfection.

For example, in the first antithetical statement (Matthew 5:21-22), Jesus says that if our righteousness surpasses that of the Pharisees and the teachers of the law (which it must, if we are to enter the kingdom of heaven), we must not only avoid murdering another human being, we must not hate or despise them.

There is no way that any human can ever—or has ever—lived a life without hating others.

In his teaching about adultery (Matthew 5:27-28), Jesus says that any man who has looked at a woman lustfully has committed adultery. This is, of course, an all-inclusive judgment on any heterosexual man who has ever lived. No heterosexual man has ever failed to look at some woman, at some point in his life, without lusting.

Jesus says that, if we hope to enter the kingdom of heaven, then we transcend loving our neighbors and hating our enemies and begin to love our enemies and pray for those who persecute us (Matthew 5:43-44).

Once again, this expectation is humanly impossible! No human has ever perfectly loved their enemies and prayed for those who persecuted them. So what is Jesus telling us?

Using the two principles I’ve given, 1) The Grace of Our Lord, as Evidenced in the Cross of Christ and 2) Understanding the Bible From a Christ-Centered Perspective, we can understand that Jesus was beginning to explain God’s grace and the significance of his Cross.

Jesus was talking about the love he would express on his Cross, explaining that he would, through his perfect obedience, his perfect work on the Cross, do what human beings could never do on their own.

We, by faith, may receive the very righteousness of Christ, so that we will, in the context of Matthew 5, experience two things:

2) We are perfected by the Cross of Christ if we activate and accept that perfection (Matthew 5:48) when we believe in Jesus Christ as the only One who can do for us what we cannot do for ourselves.

Matthew 5:17-20 is a perfect case in point of the necessity for understanding the Bible from a Christ-centered perspective. It is possible to understand this chapter, specifically vs. 17-20, and vs. 48, as Jesus’ teaching us that we are required to do more, work harder, obey more carefully, than even the Pharisees.

I know it’s possible to have that understanding because that’s exactly how I understood this passage for over three decades. That’s how I believed it, taught it, and preached it, from pulpits and in classrooms, until God’s grace arrived in my life.

One of the passages written after the Cross of Christ that directly relates to our topic is Romans 3:21-24. As we conclude let’s consider its grace-based teaching and its Christ-centered perspective, as it places the righteousness of Jesus Christ in the spotlight, where it, of course, rightfully belongs.

But now a righteousness from God, apart from law, has been made known, to which the Law and the Prophets testify. This righteousness from God comes through faith in Jesus Christ to all who believe. There is no difference, for all have sinned and fall short of the glory of God, and are justified freely by his grace through the redemption that came by Christ Jesus.—Romans 3:21-24