When Were You Saved…And Does it Really Matter? 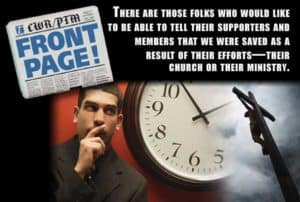 Here’s an email I received recently:

I said the prayer to be saved when I was ten years old. I don’t remember much about it—just that my mom was upset that the church I was attending with my friend would baptize a child (me) who was not really sure what was going on. Many years later, in another church service, I asked Jesus to come into my heart again. The pastor announced to the church that I was rededicating my life. Yet looking back, I feel that God was with me all along.
Is it possible that I was truly saved when I was age ten, even though I was unaware of its great importance? I know that God knows my heart and I have a great passion for my relationship with Jesus. Should I be concerned about my testimony?

I think the whole idea of trying to determine an exact time when someone is “saved” is somewhat manipulative. Fixing an exact time has more to do with what we are thinking and doing than what God is doing.

Consider—when people talk about when they were “saved” they are often recounting when they determined, in some way, perhaps in some emotional context, to serve God. While there’s nothing wrong with remembering the exact time when we gave God our commitment, that memory is, at the end of the day, more about us than it is about God.

Is the time we decided to make a commitment to God, then, the exact time when we were “saved”? Well, no it isn’t, because the Bible clearly tells us that repentance is a gift God gives to us. The Bible tells us that we cannot respond to God unless and until we become aware that he loves us first. So, any moment in time that we recall, any religious place where we happened to be or any religious thing we were doing or performing, is not the moment of our salvation.

We have to realize that there are those folks who would like to be able to tell their supporters and members that they were saved as a result of their efforts—their church or their ministry. So we are often urged, in various religious settings, to rededicate our lives—make a re-commitment. Some estimate that at any given “revival” well over 95% of those who “go forward” already consider themselves to have committed their lives to God—but are now recommitting.

However, it may seem to an observer that the vast majority of those people were so moved by the sermon or the service that they are now, for the first time, beginning a relationship with God.

There are even churches who tell people who start attending that no matter what kind of relationship with God they thought they had in the past, if they wish to become a part of this new church they must be re-baptized—they must publicly accept Christ in the weekly service of that church, etc.

When this kind of thing happens we are talking far more about religious publicity and manipulation than we are about authentic relationship with God.

I am fond of the story of an old professor who was asked by one of his students, “When were you saved?” The student of course was hoping to hear about the professor attending a Billy Graham crusade or when the professor experienced some emotional upheaval and turned to God—but the professor gave a different answer. “When was I saved? Well, I should think that would have been almost 20 centuries ago, at the cross of Christ.”

At the end of the day, what matters is whether you have a real relationship with God. If you do, you enjoy that relationship by his grace. When exactly, in our lives, that we became aware of his love may or may not be something each one of us remembers. If it is a date and time we recall, we should always remember that something had to happen in our lives long before that, so that we became receptive to God—and whatever happened to make us receptive is credited to God’s grace.