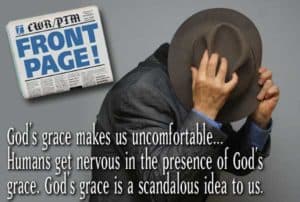 Our story centers on Jacob’s deception, but more than that, it centers on God promising a reversal. God essentially told Rebekah, Jacob and Esau’s mother, that Jacob would receive the blessing the older brother, Esau, should have had. Amazingly, the life of Jacob after he had deceived both his father and his brother was an ongoing saga of deceit and conflict. When Esau realized that he had been duped and deceived, Jacob had to run for his life to escape Esau’s anger.

The story of Esau and Jacob is an illustration of God’s scandalous grace, a grace that reaches into the murky depths where right and wrong seem to be blurred, where it seems that God might not be fair (as we humans understand fairness).

When we think of God and how he acts and reacts to us, we are often tempted to think of ourselves like Jacob. In our heart we know we don’t deserve to have what we want and we certainly don’t expect God to do anything for us that we don’t deserve. We know that God would be extremely unhappy if he ever found out just how bad we really are, or if he ever found out all the bad stuff we have done in our lives.

That’s how many humans see God. We are the suspects. God has arrested us, cuffed us, booked us and we are now in deep trouble. We know we are dead meat. He has us in the interrogation room. Here he comes. On the one hand he is God the Father—the bad cop—on the other hand he is Jesus, God the Son—the good cop.

The two divine detectives take us, the suspects (of course we know we are not simply suspects, we know we are guilty). We know we are in the wrong. But, we think, maybe we can just somehow escape by fooling God. So there we are, in the interrogation room, the one with the two-way glass so that God the Holy Spirit, and all the angels in heaven can watch the Father and the Son work us over.

According to what we have been told by religion and its authorities, God the Father plays the role of the bad cop. He is an old, grizzled veteran of the force. He has seen it all. He is a tough guy, mean, ruthless, uncaring, and sometimes, in order to get suspects to talk, he has been known to rough them up a little.

Then there’s Jesus. We think of him as the one who plays the role of the good cop. Because we’re like Jacob, shrewd and street wise, we know how this whole interrogation is going to play out. Jesus will intervene while God the Father is playing the heavy, and he will say to the Father “Hold on. Let’s give this guy a break. Why don’t you cool off and let me talk with the suspect?”

Then, we think that Jesus might say something like this to us, “You have to understand the Father. He has a lot of things on his mind. He’s got the whole universe to worry about. He sometimes gets stressed out. In fact, last year, right here in this interrogation room, he went ballistic, worked over a suspect, and sent that guy to hell— sometimes, if we listen carefully, we can hear the shrieks of pain coming from that guy as they torture him ‘down there.’ But that doesn’t have to happen to you. You can talk with me. Why don’t we do that before my Father gets back?”

We presume that this is the way the divine drama in the divine station house where sinners/criminals are held plays itself out. But of course, this is where we go wrong. We completely misunderstand God. God is not a policeman. He is not in the business of tracking us down and hauling us into the police station insisting that justice is served.

We fall for the idea that God is both good cop and bad cop. We hear God the Father described as the angry God of the Old Testament, the one who demanded the slaughter of men, women and children. Then we hear God the Son, Jesus, described as meek and mild, a softie—someone who would never hurt a fly.

Perhaps we think of God somewhat like Isaac—old, with a long beard, whose sight and hearing is failing. Someone we can trick. But this is where we go wrong, there is no bad divine cop. For that matter, there is no good cop either. There is no cop of any kind in heaven. Who is in heaven? Just God—God the Father, God the Son and God the Holy Spirit—one God who is merciful, pure, loving, and filled with grace. He’s in the salvation business—in the business of reclaiming and transforming people.

Many are scandalized by this notion—because after all, from our human perspective, there is something unjust and scandalous about God’s grace. Depending on what you think “getting away with sin” means, God either does or doesn’t allow people to get away with sin. There are always consequences for sin—always physical penalties, and we will pay them, for God does not always provide a way out of such a payment. Sometimes he does, but that’s not his primary mission.

His mission is to provide us with his love and grace, the basis of an eternal relationship with him. He offers us his grace without reservation, without respect of persons. He provides his grace to everyone, of course the choice is ours as to whether we will accept his grace or not.

God is not who we often think he is—he is not the God we have been told about by Christ-less religion. God is altogether different than we have assumed, completely different from the kind of God we have been led to believe. God is not a cop. God is rich in mercy, grace and justice. God is love. God is on our side. God is not out to get us, he is out to rescue and save us from the predicaments and dilemmas of our lives. He is out to love us. He is not angry with us, he is at his home, the door is open, the front porch light is on, the phone line is open—he is waiting for us. He will always welcome us. Always.

The fact that he might use one person, as he did in this story of Esau and Jacob, in one way and another person in another, does not mean that he is unfair. We might see it that way, but our human perspective is not one and the same as God’s.

God’s grace is scandalous to the human mind. God does not reward sin, but he loves sinners, which would be you and me. Remember this—by his grace God gives all of us spiritual gifts and benefits we do not deserve. God offers us an eternal relationship based on his grace.