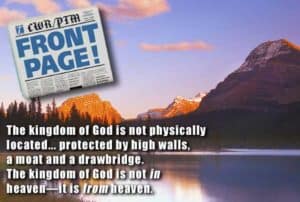 He went into all the country around the Jordan, preaching a baptism of repentance for the forgiveness of sins. As it is written in the book of the words of Isaiah the prophet: “A voice of one calling in the wilderness, ‘Prepare the way for the Lord, make straight paths for him. Every valley shall be filled in, every mountain and hill made low. The crooked roads shall become straight, the rough ways smooth. And all people will see God’s salvation.'”—Luke 3:3-6

This passage, of course, is not a literal description of how the kingdom of God changes the topography of the world—it’s not a literal description of kingdom of God road building and highway projects. Rather, the sweeping grandeur of terms like every valley being filled in, every mountain and hill being made low, the crooked roads being made straight and rough ways smooth are inspiring and majestic metaphors describing:

• the end of poverty,
• injustice being made right and satisfied,
• warfare becoming peace,
• corruption being purified,
• pollution being cleansed,
• suffering being healed,
• slaves becoming free,
• sickness and disease healed.

This grand promise is a portrait of the end of favoritism and partisan politics, of back room deals and of human beings suffering under the heavy hand of government and religious authorities. The kingdom of God will, among other things, overthrow and eliminate Christ-less religion as we know it, experience it and endure it.

While there are many miraculous and wonderful ways in which the kingdom of God is growing and active in this world, we also realize that the complete and final overhaul of this world and its kingdoms has not yet been completed. The kingdom is not only already, but it is also not yet.

Even though the kingdom of heaven is already here, even though it is thriving in the hearts and souls of men and women everywhere, it obviously doesn’t cover every part of our world yet—we still live in the midst of suffering, heartache, hatred, warfare and evil of all descriptions. Human beings still live with ignorance and superstition—and the fear, shame and guilt caused by Christ-less religion.

But there will be a time when, as Isaiah says in chapter 11:9, the earth will be full of the knowledge of the LORD as the waters cover the sea.

Then I saw “a new heaven and a new earth,” for the first heaven and the first earth had passed away, and there was no longer any sea. I saw the Holy City, the new Jerusalem, coming down out of heaven from God, prepared as a bride beautifully dressed for her husband. And I heard a loud voice from the throne saying, “Look! God’s dwelling place is now among the people, and he will dwell with them. They will be his people, and God himself will be with them and be their God.”—Revelation 21:1-3

This is the New Jerusalem, the New Heavens and the New Earth, coming down from heaven to this earth. This is the time, as Revelation 11:15 says, in language used by Handel in The Hallelujah Chorus from The Messiah, that the kingdoms of this world become the kingdom of our Lord and of his Christ, and he will reign forever and ever.

God does not impose his kingdom on humans—he offers it. The kingdom of God is accepted, or rejected, individually. Each of us either embraces it or refuses it. As and when we become aware of God’s invitation to his kingdom, we either enter the kingdom, accepting the Lord’s invitation, or we turn and walk the other way. The kingdom of God is a network of individuals who have surrendered their independence of God and bowed the knee to Jesus, the King of the kingdom. Citizens of the kingdom are networked together by their common communion in and bond with the living Lord Jesus Christ.

The kingdom of God is interwoven into and within Jesus’ teaching—the kingdom is part and parcel of all that he preached in his earthly ministry. Many of his parables are kingdom parables—they describe the kingdom. His teachings and sermons talk about what the kingdom looks like as he, the King, lives his risen life in those who have accepted this invitation and thus become citizens of the kingdom.

And Jesus continually faced down the kingdom of religion in his ministry—he did not fit the popularly accepted and believed definition of what it means to be religious. Jesus explained the kingdom of God as the precise opposite of the values, beliefs and practices of the kingdoms of religion. So we find in his parables and teachings that the good guys enshrined and sanctified by our culture and religion become the bad guys. In Jesus’ teachings, those who think they are righteous are not, those who are lost are found, the last are first, the least are transformed into the greatest and independent, self-sufficient adults are spiritually reborn and transformed into dependent, humble children. In fact, in Matthew 23:13 he bluntly told the religious leaders of his day:

One of the ways that Christ-less religion often completely blurs and obscures the kingdom of God is by placing the totality of the kingdom in the future. Thus people live their lives in the here and now thinking about how they must qualify for and earn admittance into a future kingdom. But The Already-Here Kingdom is first experienced before The Not-Yet Kingdom. There is no doubt that the kingdom has a future dimension, and that the totality of the future dimension is far greater than the present dimension. However, the present dimension of The Already-Here Kingdom comes first because it must—it prepares the way, as John the Baptist did for Jesus.

Jesus often spoke of the present reign of God—a reign that brings life eternal, life to the full, as here and now. He said that the kingdom is here, within our midst. He said that his ministry proclaimed that the time was fulfilled and it was time for him, God in the flesh, to offer and announce and plant the kingdom of God, on earth.

Jesus didn’t diminish spiritual life on earth—he didn’t speak of the ultimate goal of the children of God as “going to heaven”—the kingdom of heaven was ALREADY HERE, he said. Further, as he revealed to John in the book of Revelation, his kingdom was NOT YET. This real presence of the future now is yet another way that God reveals himself to us as not just another god—but the one true God. By contrast to the one true God, the pagan gods are normally pictured as being “up there”—in their celestial kingdom, in the case of the Greek gods, on the celestial Mt. Olympus.

In the days of Christ, and before, pagan gods were thought to interact with humans on earth, but their real interests—their real domain—was “up there.” Theirs was a celestial kingdom—their power and actions affected humans on earth, but normally not in a positive way. The Bible insists that there is only one true God and that out of his love for us, in Christ he became a human being, becoming one of us. Further, in Christ, he did not curse or kill humans, but instead he himself was crucified, as the ultimate demonstration of his love.

Then, at the end of time as we know it, when God makes all things new, he doesn’t take humans away from the earth, but instead he brings heaven down to earth. And most importantly, the foundation of the kingdom of God, both now and in the future, is his grace. God establishes the kingdom for us, by his grace, in the person of Jesus Christ.

We don’t bring the kingdom into existence. We don’t earn the kingdom or qualify for it. We don’t, through our efforts to evangelize “build” or “grow” the kingdom—humans don’t create, build or bring about the kingdom here on earth. God alone can do that. We can embrace his kingdom—we can accept his invitation to live in his kingdom forever—but this one thing remains—he and he alone brings about the kingdom

God brings the kingdom, first of all, as the ALREADY- HERE kingdom, to this earth, himself—in Jesus. He didn’t send a human messenger. When God sent the law, he sent a human being. But Moses didn’t establish the kingdom at Mt. Sinai with the Ten Commandments. When God sent grace and truth, he delivered it himself. Jesus, God in the flesh, came personally, establishing the kingdom. Jesus came down here, bringing the ALREADY-HERE kingdom to us and for us.

Secondly, God brings the kingdom, the NOT-YET kingdom, down to this earth from heaven—the New Jerusalem, the New Heavens and the New Earth. Again, the message rings clear—we do not bring about God’s righteousness here on earth. We don’t establish the kingdom of God on earth. God alone can do that—he’s done it in the sense that it’s ALREADY-HERE, and he will do it in the future in the sense that it’s NOT-YET.

Jesus didn’t speak of the kingdom of God as a far away, never-never land where his disciples and followers would eventually hit the heavenly jackpot and live in ease and security for all eternity—spending their days sitting in a recliner, listening to harp music, eating chocolates and being fanned with palm fronds by angels.

You and I can say with all assurance that we are now living in the kingdom of God—we are now experiencing, by God’s grace, the ALREADY-HERE kingdom of God. We can also believe, with all our hearts, that we will experience the fullness of the NOT-YET kingdom, when it descends from heaven—when the King of the kingdom makes all things new—when this earth and the heavens are made new.

One day God will inaugurate the fullness of his kingdom on this earth—it will come down from heaven—he will make all things new. The kingdoms of this world will become the kingdom of our Lord and of his Christ, and he will reign forever and ever.
Hallelujah!