Warning: Thinking May Be Hazardous to Your Religion 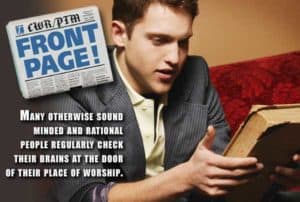 1) the spiritual dynamic of the Spirit of God living in us who “will teach you all things” (John 14:26), and 2) the human dynamic of critical thinking.

I’m sure that every generation laments that it seems its youth have lost the ability to think, and let me join the parade. But let’s not just make this a rant about young people. Lack of critical thinking is not a deficiency restricted to our youth, but it seems like irrational actions abound in all age groups. For example, let’s think and talk about a topic we can’t talk about almost anywhere (even in church) for fear of offending someone. Let’s talk about religion.

In the world of religion, thinking can land you in hot water. No doubt about it. So why should I encourage you to think about religious stuff? [Remember: Religion is the unbiblical idea that our performance earns us a higher standing with God than we would have otherwise enjoyed. Religion proposes that humans control their relationship with God on the basis of their attempts to be good and their abstinence from evil behavior.]

Failing to think within a religious context is what religion counts on to enslave its followers to its edicts, dogmas and traditions, as compared with the gospel of Jesus Christ. “Bad news religion” would lose a lot of its business if most religious folks just started to think. That’s something worth praying about.

Church: A Place to Suspend Critical Thinking?
Many people go to church for prepackaged and even predigested answers. Nothing wrong with answers, but have you carefully considered the teaching ministry of Jesus? He seemed to raise far more questions than answers, and he often didn’t even directly answer questions he was asked.

Does Jesus want us to think? Of course he does. Does he want us to carefully consider the claims of Christ-less religion? You bet he does—just read Matthew 23 sometime. Many otherwise sound minded and rational people regularly check their brains at the door of their place of worship. At most other times, these same people balance their check books, drive within the speed limit (almost anyway) and are able to engage in normal conversations with others.

But when some enter into a place of worship, they willingly suspend critical thinking, and in effect seem to say to religious professionals, “Here I am—spiritual silly putty. Crank up the atmosphere, mesmerize me, place me in an altered state of consciousness, make me feel good—take me to any emotional destination you wish. I’m here to be entertained and escape the real world. I’m not going to think—I’m just going to emotionally react.”

In the name of God and Christianity, millions within the world of Christendom sit in cathedrals, sanctuaries and warehouse-like mega-churches and blindly allow religious authorities to tell them what the Bible really means. You see, according to some religious authorities, the Bible doesn’t mean what it appears to. That’s assuming the Bible even makes it into the sermon, for in some religious environments people are assured that their religious leader has transcended that silly old book, and under his or her leadership and teaching they too can leave the Bible behind.

Millions not only accept anything their religious authority tells them about the Bible, but then they allow that authority to tell them what to do and when to do it—and what kind of look to have on their face while they’re doing it.
Institutionalized religion is primarily concerned with teaching its followers creeds to memorize, believe and recite. Religion has its prayer and hymn books and its study Bibles so that its followers will toe the party line.

“I’m Better Than You Are!
Just in case I haven’t ruffled enough feathers already (how in the world am I going to encourage you to think if I don’t challenge you?) let’s discuss one of the most illogical of all core religious beliefs. The average religious person assumes (because they have been deceived by religion) that they are better than other average religious persons. Religious folks sit in church and think: “Oh the Methodists or Lutherans down the street. You know, they’re nice people. But they are so messed up. They don’t get it…not like I do.”

There is, of course, no biblical rationale for such a silly, nonsensical conclusion. In fact, it’s so arrogant and unbiblical that while many churches covertly teach that they are better, have “more truth” or are more “spirit-led” (because, after all, such lofty “truth-claims” are one of the main ways to keep folks coming back) they have long-winded, carefully written statements to say that they don’t actually teach what they have carefully indoctrinated their members to fervently believe.

How do you arrive at the conclusion that you are religiously superior by studying the Bible? You don’t. How do you come to such a conclusion if Jesus is living his life within you? You don’t. You need religious propaganda/brainwashing
to seduce you into accepting such a conclusion. You need religious stuff that nullifies Jesus’ selfless life of the Spirit to believe such a preposterous conviction.

If the mind of Jesus (Philippians 2:5) guides our thinking, we can conquer such religiously induced beliefs, so that we won’t look at another person and say, “Oh, I would never do that! Look at where she has a tattoo. I would like to pay attention as I sit here in this brick-and-mortar church, but my eyes are glued on her tattoo. I might get a tattoo, but not there! I might have a discreet earring, but all that metal hanging from my nose, lips or eyebrow? No, I would never do that.”

We will always see ourselves as better than most folks, that’s natural. But along comes religion and gives us a huge boost—now we think we are not only better, we actually believe we are spiritually superior.

Think of a religious fast food emporium—there we are, lined up in the religious drive-through, waiting for our “God-fix,” and when we get up to the window (and remember, I’m talking about the idea that God is so impressed with what we do that we can actually cause him to love us more because of all the religious rituals we perform) religion asks us if we want to supersize our natural pride. Of course we do!

Don’t you want to be convinced that you are better than the average religious Joe? Of course! And there are many churches just waiting to accommodate you. When we are religiously super-sized, we come away thinking we are better than everyone else—we are the only, the chosen, the best, the called—the select.

Unique in Christ
All of this spiritual pride is a clever counterfeit, because God actually does supersize us. But when God makes us better he tells us that we can be special to God only because of his grace. He tells us that there is only One who is unique—Jesus (John 1:16). If Jesus lives his risen life within us, we become God’s very own children. How much more super-sized can you get than that?

The message of the resurrection of our Lord is an invitation to sit up and think. He won the victory over death and the grave. He is risen. He triumphs over all powers, principalities, rules and religions. He alone is worthy of our worship. He invites us to come to him, to examine the promises he gives, to live the life he will lead within us.

He does not encourage superstitious, emotional knee-jerk reactions to his resurrection, but thoughtful and careful consideration of the difference he will make in your life. Read what he told the two men on the road to Emmaus (Luke 24:13-35).