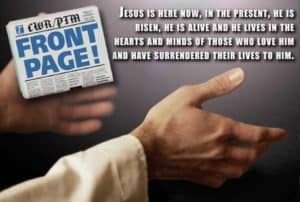 The revelation of Jesus Christ, which God gave him to show his servants what must soon take place. He made it known by sending his angel to his servant John, who testifies to everything he saw—that is, the word of God and the testimony of Jesus Christ. Blessed is the one who reads the words of this prophecy, and blessed are those who hear it and take to heart what is written in it, because the time is near.
John,
To the seven churches in the province of Asia:
Grace and peace to you from him who is, and who was, and who is to come, and from the seven spirits before his throne, and from Jesus Christ, who is the faithful witness, the firstborn from the dead, and the ruler of the kings of the earth.
To him who loves us and has freed us from our sins by his blood, and has made us to be a kingdom and priests to serve his God and Father —to him be glory and power for ever and ever! Amen.
Look, he is coming with the clouds, and every eye will see him, even those who pierced him; and all the peoples of the earth will mourn because of him. So shall it be! Amen.
“I am the Alpha and Omega,” says the Lord God, “who is, and who was, and who is to come, the Almighty.”—Revelation 1:1-8 (my emphasis)

When people think of Jesus, they think of either one, or at the most, two of his comings. They often think first of what is popularly called his “first” coming—the coming of God, to this earth, in the person of Jesus. The first coming is the Who was in the title of this article and in the first chapter of Revelation.

Next, they think of what is popularly called his “second” coming—the future coming of Jesus to this earth. The second coming is referenced by Who is to come.

There is a third coming mentioned —Who is. Jesus is here now, in the present, he is risen, he is alive and he lives in the hearts and minds of those who love him and have surrendered their lives to him.

Though customs vary throughout Christianity, the season called Advent begins at the end of November and continues for four Sundays into the last days of December, culminating in the Sunday just before or just after Christmas Day.

Advent is a word derived from the Latin adventus—meaning “coming.”

In early Christianity, the season was primarily about the first coming of Jesus. Then, over time, the season started to include the idea of the other two comings, two comings that are the preparation and foundation for Christmas—his future, second coming and his present coming, by grace, into our daily lives as our risen Lord.

With this season of the year in mind, let’s carefully study the eight verses of the first chapter of Revelation.

This is not a book that is all about our time and space. It’s not primarily about world events yet to take place, nor is it primarily a history of events that have taken place. This is, as the first coming of Jesus was all about, a book about the intersection of time and eternity. Jesus Christ is both the message and the messenger of the book we call “Revelation.” It is his revelation, about him and by him. He is the divine author, he is the theme and story line.

This passage is a reminder that Jesus is the firstborn from the dead, that he has conquered death and the grave through his resurrection, and because of that, he isn’t simply a footnote in a history book. This passage reminds us that he IS—and he IS TO COME. He is alive. He is risen.

Verse five declares that Jesus is the ruler of the kings of the earth. This is a dogmatic, oft-repeated declaration, that Jesus is the Lord of all, that he reigns from the past, in the present and into the future.

Once again, this introductory passage to the book of Revelation is not concerned so much about our little sliver of time in which we occupy time and space on this planet. This passage is all about the intersection of time and eternity. Who IS, and Who WAS, and Who IS TO COME.

1) loves us and has freed us from our sins by his blood and 2) has made us to be a kingdom and priests to serve his God and Father.

First of all, we are assured that Jesus loves us, and that because of his blood we are not slaves to any man, to any institution, to any power or any authority, for we serve him and him alone.

Secondly, Jesus has made us into a kingdom, comprised of all who surrender to him, all who follow him without reservation, all who accept the kingdom on his terms, which is by grace alone. Those who surrender to him, without reservation or condition, are part of his kingdom, regardless of race, gender, creed or denominational claims of some kind of religious superiority over other Christians.

Verse seven focuses on the second coming of Jesus. Here is a comforting and reassuring reminder, as well as a spiritual “heads up.” We do not live only for the here and now, we live in the light of the past, in the dynamic reality of our present in Christ—and in the assurance of eternity in and with him.

We now come to verse eight, a foundational statement which I invite you to ponder at some length. The defining event in the salvation history of the Old Testament people of God was their deliverance and redemption from the physical and spiritual slavery and oppression they experienced in the nation of Egypt.

When God spoke to Moses, giving him a commission to lead his people out of religious bondage, the enslaved peoples of Israel didn’t know the one true God. They knew the gods of Egypt, but they had forgotten the God of Abraham, Isaac and Jacob.

In Exodus 3:14 God instructed Moses to tell them that I AM WHO I AM would deliver them from the Pharaoh of Egypt.

And now, here in Revelation is a similar call—a call, as we read in Revelation 18:4, to come out of her, my people. What is the invitation issued by the book of Revelation? The invitation, the proclamation, is a call from Jesus, the messenger and the message of this incredible book, the author and the subject, to leave the religions of Babylon in favor of the eternal Promised Land—the new heavens and the new earth, a spiritual destination that flows with eternal milk and honey.

The God of the Exodus is I AM WHO I AM, who protected the Israelites from the last plague which killed the firstborn of the Egyptians by telling them to smear the blood of a Lamb on their doorposts.

I AM WHO I AM is one God, the same God, the God of Exodus and the God of Revelation, who is the same yesterday and today and forever—as we read in Hebrews 13:8.

I AM WHO I AM is the Lamb of God who identifies himself here in the first chapter of Revelation, in verse eight, as who is, and who was, and who is to come, the Almighty.

Verse eight begins with the words I am the Alpha and the Omega.

Using the first and last letters of the Greek alphabet Jesus tells us that he is the beginning and the end, the first and the last, the starter and the finisher, the creator and the judge. He is eternal, with no beginning and no end. He is the Messenger who reveals himself to be the message, the Messenger who
1) conquered, in the past on his cross and through his blood as the Lamb of God redeems us from all of our sins and
2) who is now, in the present, alive as the risen Lord, and
3) will, in the future, return to this earth a second time. Who IS, and Who WAS, and Who IS TO COME.

Let’s talk for a moment about that last word “come.” As I mentioned before, the term advent comes from the Latin adventus meaning “coming.” This is a term that has great and profound meaning about our relationship with God. Advent is the root word of adventure—and adventure is one of those words that describes what it means to be in Christ, and for Christ to be in us. Advent is a word that is used over 1400 times in Scripture. Advent is a word that is all about the coming of God, in the person of Jesus, to be one of us—to be Immanuel, God with us.

And it’s a word that speaks to our blessed hope—our eternal assurance—of the heavenly kingdom he will bring with him at his second coming—a kingdom we now experience, but will then fully inherit and inhabit.

It’s a word that not only refers to God, in the person of Jesus, coming to this earth as a little child, but to God’s coming to this earth at the end of human history, in his glory, in his majesty, with a trumpet and the shout of an arch-angel. No one knows when that day will be—but we do know that day will come.
And in the in-between time—the time between his first and second comings—we live in our day-to-day lives with God, who is in us and with us—with God a part of all that we do—for he comes to us now, as well as yesterday and as well as tomorrow.

As I mentioned earlier, there are well over 1400 times in the Bible when the word “come” is used. As we conclude let’s refer to five of those passages:

Come, all you who are thirsty, come to the waters; and you who have no money, come, buy and eat! Come, buy wine and milk without money and without cost.—Isaiah 55:1

Come to me, all you who are weary and burdened, and I will give you rest.—Matthew 11:28

People were bringing little children to Jesus to have him touch them, but the disciples rebuked them. When Jesus saw this, he was indignant. He said to them,

“Let the little children come to me, and do not hinder them, for the kingdom of God belongs to such as these.”
—Mark 10:13-14

“…If anyone is thirsty, let him come to me and drink. Whoever believes in me, as the Scripture has said, streams of living water will flow from within him.”—John 7:37-38

He who testified to these things says, “Yes, I am coming soon.” Amen. Come, Lord Jesus.—Revelation 22:20