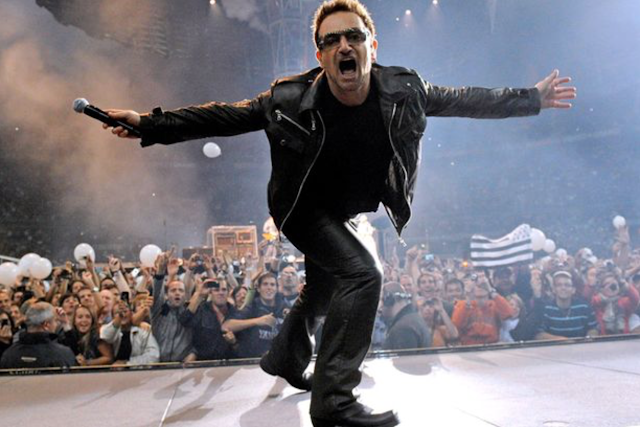 You see, at the center of all religions is the idea of Karma. You know, what you put out comes back to you: an eye for an eye, a tooth for a tooth, or in physics—in physical laws—every action is met by an equal or an opposite one. It’s clear to me that Karma is at the very heart of the universe. I’m absolutely sure of it. And yet, along comes this idea called Grace to upend all that “as you reap, so you will sow” stuff. Grace defies reason and logic. Love interrupts, if you like, the consequences of your actions, which in my case is very good news indeed, because I’ve done a lot of stupid stuff…

I’d be in big trouble if Karma was going to finally be my judge. I’d be in deep s—. It doesn’t excuse my mistakes, but I’m holding out for Grace. I’m holding out that Jesus took my sins onto the Cross, because I know who I am, and I hope I don’t have to depend on my own religiosity…

I love the idea of the Sacrificial Lamb. I love the idea that God says: Look, you cretins, there are certain results to the way we are, to selfishness, and there’s a mortality as part of your very sinful nature, and, let’s face it, you’re not living a very good life, are you? There are consequences to actions. The point of the death of Christ is that Christ took on the sins of the world, so that what we put out did not come back to us, and that our sinful nature does not reap the obvious death. That’s the point. It should keep us humbled… It’s not our own good works that get us through the gates of heaven.

– Bono –
Bono has given us a gift here, showing how grace trumps karma or the old law of sowing and reaping. In his model, I’ve also found the idea and language of ‘absorbing sin’ very helpful. On the cross, sin is absorbed and recycled as forgiveness.
Similarly, Simone Weil’s says that Christ took our affliction and in his body on the cross, divided our affliction into sin and suffering. There, he eradicates our sin through forgiveness and purifies our suffering into self-giving love.
The language of absorbing also makes sense of the ‘cost’ of the cross. When we see words like ‘redemption,’ ‘ransom,’ and so on, we sometimes corner ourselves into saying Jesus ‘paid the debt.’ But paid who? The early church saw the problem: Jesus couldn’t be paying the Father because God is not the jailor, slaveholder or hostage-taker. But he couldn’t be paying the devil, because God owes the thief nothing. Indeed, the biblical metaphor of redemption and ransom hearkens back to the Exodus, in which Pharaoh is plundered, not paid.
The issue, I believe, is the confusion between the idea of ‘cost’ and ‘payment.’ At great cost to himself, Christ rescued us from Satan, sin and death, but that doesn’t require a pre-requisite payment before God can forgive. Indeed, payment isn’t forgiveness, nor is forgiveness based on a third-party payment actually forgiveness. It’s just a triangular transaction.
So, to use the economic metaphor, forgiveness is not third-party payment of your debt so that God can forgive it. Rather, in Christ, God **writes off** the debt and absorbs the cost himself. Again, it’s not transactional or it’s not forgiveness. Note: I owe the aha! notion of “writing off debt” to Greg Albrecht, in his book, Spiritual Soup for the Hungry Soul, Vol. 3.
Similarly, if you prefer juridical (legal) language, forgiveness is not third-party punishment of sin so the criminal could go free. That’s not forgiveness; it’s just victimizing the wrong person and doubling down on the injustice. Rather, the New Testament sees Christ on the cross pardoning our sin and redeeming (i.e. freeing us) from sin’s consequences or Satan’s prison — namely, death itself.
Yes, even in human justice systems, pardon without punishment is legal and just. President Nixon was pardoned by someone with the authority to do so (Gerald Ford) … without punishment. That wasn’t an injustice (legally). That was forgiveness. Even Pilate could justly release Barabbas under the law.
How much more so does the biblical Jubilee proclaim that debts are forgiven and slaves are released, without payment or punishment. It is precisely this which Christ proclaims in Luke 4:19 when he declares “the year of the LORD’s favor.” Interesting too: he says this prophecy is fulfilled “today” (in vs. 21). The great liberation doesn’t even wait for Good Friday … it began the day Jesus launched his ministry in Nazareth, continued throughout his life, and climaxed in his death, resurrection and ascension.
Note: But what about the cost of the Cross? What about the fact that the Bible says, “Jesus died for us”?
Yes, on the Cross Jesus died for us — he went to Satan’s prison FOR us. But it’s not that he is imprisoned there by God to be punished instead of us. Rather, it’s that at a very great cost to himself, through death, he entered the prison of death, shattered its bars, bound up the jailor and led us out into freedom. That’s what “Jesus died for us” means in the NT. He “went there” for us, got us, and came back with us.
Please share: