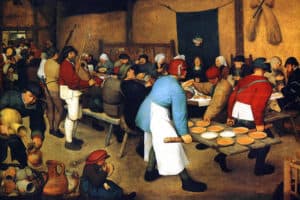 The Parable of the Great Supper

15 Now when one of those who sat at the table with Him heard these things, he said to Him, “Blessed is he who shall eat bread in the kingdom of God!”

16 Then He said to him, “A certain man gave a great supper and invited many,17 and sent his servant at supper time to say to those who were invited, ‘Come, for all things are now ready.’

18 But they all with one accord began to make excuses. The first said to him, ‘I have bought a piece of ground, and I must go and see it. I ask you to have me excused.’ 19 And another said, ‘I have bought five yoke of oxen, and I am going to test them. I ask you to have me excused.’ 20 Still another said, ‘I have married a wife, and therefore I cannot come.’

21 So that servant came and reported these things to his master. Then the master of the house, being angry, said to his servant, ‘Go out quickly into the streets and lanes of the city, and bring in here the poor and the maimed and the lame and the blind.’

22 And the servant said, ‘Master, it is done as you commanded, and still there is room.’23 Then the master said to the servant, ‘Go out into the highways and hedges, and compel them to come in, that my house may be filled. 24 For I say to you that none of those men who were invited shall taste my supper.’”

Prior to and aside from the horrific notion that God pre-selects some to eternal life and others to everlasting damnation, historic Christianity held high God’s desire that everyone is invited and that all would freely respond to his grace.

With that firmly in mind, what are we to make of the Parable of the Great Banquet, where Jesus describes an escalating use of pressure in the invitation?