In Need of Grace – by Greg Albrecht 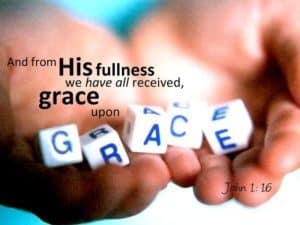 This week we are beginning a three-part series on God’s amazing grace—based on the first few chapters of the book of Romans.

Next week we will discuss Grace Alone—based on Romans 3:21-26.

Our third and last message in this series on God’s grace is titled, It’s All About Grace—as we study Romans 3:27- 4:12.

Grace is one of those prodigious, stupendous words of beauty introduced to us in the New Testament. Grace is the manner in which God operates. He relates to us on the basis of grace, on the premise of his generosity. Humans relate to one another on the basis of performance—on the foundation of producing works and deeds which merit a reward.

Grace is what God does for us that we cannot do for our- selves. Grace is God’s free gift to us that is given without any obligation on his part, for there is nothing that we can produce or give to him that obligates him to us. Grace tells us that God is good to us because he is good, unrelated to any goodness we might be able to manufacture.

We find God’s grace difficult to comprehend because it doesn’t “operate” the way we do. We do things for others because they have done something for us. We like someone on the basis of what they have done or the assumption of what they potentially may do for us.

In my book Bad News Religion I quote Frederick Buechner, in his book Wishful Thinking—here’s what he has to say:

Grace is the relationship God offers to us and it is by his grace that God elevates us. In the person of Jesus, God comes to us, gives himself to us and for us, serves us and actually gives us the gift of repentance by which our hearts might be changed, enabling us to receive him and accept him. By his grace, he draws us to himself. God’s grace is, among other things, the medium of attraction by which we are attracted to God.

It is by grace that God transforms us from the earthly, base elements of lust, greed and envy into his children, born from above. By God’s grace he rebirths us, and Jesus, our risen Lord, begins to live his new life, his risen life, in us.

Throughout the history of Christianity, humans have resisted the suggestion that they needed God to make things right. After all, we humans would rather take care of our own problems. We would rather not involve God in our lives. The first group of people that Paul addresses in the book of Romans lived their lives without attempting to involve God in what they were doing. They were hedonists, dedicated to eating, drinking and making merry.

But, Paul does not neglect to address the folks who thought they had no need of involving God in their lives because of their religious teaching. Religion offers such people the illusion that their need of God is minimal.

Christ-less religion is notorious for convincing people of what they already want to believe, that they are in control of their own lives and that God will love them or not on the basis of how well they behave. Legalistic religion deceives us into thinking that we have little need of God because God expects us to earn our way into his heavenly kingdom.

For me, one of the great illustrations of human need, and the miserable slavery and horrible addictions that keep us captive, is a movie, now about 40 years old, called Cool Hand Luke. Luke, played by Paul Newman, is a headstrong young man who will not give in to the authority of the harsh prison chain gang to which he is sentenced. After one particularly brutal beating Luke is given, Luke is used as an example to the other prisoners, as someone who demonstrated a “failure to communicate.”

The book of Romans is dedicated to our “failure to communicate” with God, or as Cool Hand Luke called God, “Old Man.” Our larger passage today teaches us that we are naturally out of step with God, that we cannot do all that needs to be done to make or keep God happy, that all of our best efforts to be virtuous and righteous fall far short of the perfection God demands, and that the only way for us to be justified is for God to do what we can never do.

The church in Rome was a mixture of gentile Christians and Jewish Christians. There was a conflict between the two groups, not racially, but doctrinally.

Romans is a masterfully written letter. Many decades ago there were law schools that actually used Romans as a text book, a great example of how to argue and build a case, brick by brick.

As you read Romans you will see many conjunctives, many summary statements when Paul says things like “therefore”—“because of this”—“furthermore”—“how then”— “now then”—“consequently”—which indicate a theological premise that Paul, inspired by God, is building. He carefully establishes one point, then he moves on to the next, and the next.

Earlier we read the manifesto, the purpose statement, the thesis of this entire book of Romans. Let’s re-read it now:

I am not ashamed of the gospel, because it is the power of God for the salvation of everyone who believes: first for the Jew, then for the Gentile. For in the gospel a righteousness from God is revealed, a righteousness that is by faith from first to last, just as it is writ- ten, “The righteous will live by faith.”—Romans 1:16-17

He discusses three groups of people: 1) immoral, hedonistic Gentiles—he calls them pagans, for indeed, they were individuals who were polytheistic, people who believed in many gods, 2) hypocritical rule-keeping moralizers, and 3) self-satisfied Jews—satisfied that they were the people of the old covenant, the one and only true people of God, and that their spiritual heritage and breeding, if you like, made them superior to all other humans.

Paul summarizes the need of this first group of people—1) immoral, hedonistic Gentiles in chapter 1:29-31. Let’s read this list of 21 specific ways in which human behavior can fall short of God’s holy standards:

They have become filled with every kind of wickedness, evil, greed and depravity. They are full of envy, murder, strife, deceit and mal- ice. They are gossips, slanderers, God-haters, insolent, arrogant and boastful; they invent ways of doing evil; they disobey their parents; they are senseless, faithless, heartless, ruthless.—Romans 1:29-31

The next group he addresses is 2) hypocritical rule-keeping moralizers. Paul has “set this group up”—just as he does to us, his 21st century readers—for in reading this rogue’s gallery of 21 sinful behaviors, we automatically start to think of how bad those people are, and perhaps even think of a few specific people we know to be examples of such behaviors.

In that light, think of the reaction of the “goody-two- shoes,” self-righteous, pleased-with-themselves religious crowd as they heard or read vs. 29-31. Then, Paul turned his theological cannon on them, with a full-scale, direct assault to help soften them up for the reality that they, too, were In Need of Grace.

I think that the one verse that best summarizes Paul’s case for the need of grace for those who advocated this mindset is found in chapter three, verse 9;

What shall we conclude then? Are we {Jews} any better? Not at all! We have already made the charge that Jews and Gentiles alike are under sin. —Romans 3:9, my emphasis

Paul concludes this section, and our passage today, with another summary statement,

Therefore no one will be declared righteous in his sight by observing the law; rather, through the law we become conscious of sin. —Romans 3:20

We might say that our keynote passage today is negative. Our passage could be summarized as the bad news that human performance won’t cut it, and that human religion is inadequate to justify us and make us righteous before God. We can’t make God happy on the basis of what we do. That’s the bad news of this passage.

Paul demonstrates that we are In Need of Grace before proclaiming the good news. Next week, in Grace Alone, the second message in this three-part series dedicated to God’s amazing grace, we’ll talk about the good news.