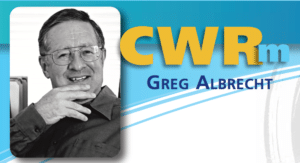 This Q & A is a response to Greg Albrecht’s “Pastoral Perspective” column in the October edition of CWRm. To view the original Q & A, entitled, “Should I attend my gay daughter’s wedding?” CLICK HERE and go to page 14. A CWRm read wrote in with this follow-up question and Greg responds.

I read your Pastoral Perspective in the October 2017, CWRm and what I get from your answer is, “It’s your decision there is no right or wrong answer.” You even claim Jesus attended “sinful and spiritually toxic places.” I would like you to elaborate on that, because I don’t know what your are referring to. I’m sure if he did, his purpose was to give the truth to the attendees of whatever event he did attend. I seriously doubt he would attend a wedding of a gay couple as a passive spectator. This event is in total violation of what Jesus taught about marriage. We as Christians live in a secular world that condones divorce on demand, adultery, living together outside of marriage and “gay marriage,” but should we equivocate on these issues? Of course God loves us but we need to be separate from the evil of this world, and yes, I believe living the gay lifestyle is evil and I think God specifically says that. Gays should be shown love and kindness, but we need to be firm in our belief that God does not honor that behavior, but he loves the person and would not attend such an event.

Thanks for your comments and your questions. I will address the issues you raise in order:

The question I address in the article is not about whether homosexuality is “right” or “wrong.” The question the woman asked was about attending a wedding of two women, one of whom was her daughter. My answer attempted to deal with pros and cons of a mother who is a Christ-follower determining whether or not to attend such an event.

To elaborate on my comment that “Jesus visited sinful and spiritually toxic places,” Jesus touched lepers – a sin at that time, for it made one spiritually impure for a period of time. That was the law of the Bible they knew at the time – the old covenant, not a religious fabrication. It was just plain wrong in terms of the covenant Jews lived by at the time. In the eyes of the Jewish authorities, Jesus continually violated the Sabbath and how it should be observed. The Sabbath was huge – it made the Jews different – better than others actually, as they saw it. Jesus’ actions on the Sabbath day were “wrong” as religious establishment defined it. Further, Jesus allowed the sinful woman to touch him, and wash his feet – another outrageous sin in that time. People with horrific physical ailments were considered especially sinful in Jesus’ day – when Jesus and his disciples saw a man blind from birth his disciples wanted to know whose sin made him suffer in such a way – his parents or the man himself?  Jesus said that neither was the case (John 9:1-2).

Jesus’ first miracle was turning water into wine – LOTS of it. Ever since that time, those who determine levels of sin have been trying to turn that wine into water, saying it is a sin to drink alcohol of any kind. Or at the very least, if one must drink alcohol, it should be done in secret so their imbibing won’t hurt their “witness.”   But in John 2, it was LOTS of wine and the drinking was in public. Did Jesus police the wedding so that no one had one too many? We don’t know do we? He did not come to call the righteous (in their own eyes) but sinners. He did not come as the Great Physician for those who felt they needed no help (the religiously comfortable, spiritually healthy in their own eyes) but rather, the sick, who knew they needed a “doctor.”    The Gospels are filled with references to Jesus’ love for the downtrodden, the marginalized, the alienated, those who were believed to be spiritually inferior and of no worth – parable after parable parable addresses his love and concern for such.

You say that if Jesus were to attend a gay wedding, he would “give the truth” to those in attendance, and not be passive.  But the fact is the only times he “unloaded” – “giving the truth” was about smug, spiritually proud and arrogant people. This was the theme of his parable about the Pharisee and the publican parable, for example, and the point of the seven woes to the religious authorities in Matthew 23: 13-39. The Truth is Jesus, and he gave the Truth to all those with whom he came into contact and who were willing to listen to him. I am not suggesting that Jesus condoned violence perpetrated by murderers or sexual sins in a brothel or drunkenness in a bar (examples of notorious sins during Jesus’ lifetime). But we search in vain for examples of Jesus “cleaning up” a bar, a brothel or a prison – but we do have examples of him “cleaning up” the religious headquarters of the temple, continually combating religious authorities, etc.

Of course our world is awash in sexual sin – but does that mean God does not love those caught in sin, dysfunction and addiction? Does God love pastors and priests who molest those under their care? What about political leaders who molest others and are still elected, endorsed for office or refuse to resign? Are they better than people who are divorced, committing adultery or married to a person of the same sex?

Read Revelation 18:4 – when God says to “come out of her my people,” what is the context? Read the chapter. It is about a system that has pimped out the bride of Christ, so that a false and grievous religion seduces and addicts people to its priorities, leading them away from God.

Telling anyone that God would not attend a particular event is above my spiritual pay grade, and with respect, it is above yours. Our Savior was crucified in a garbage dump between two thieves, one of whom he granted a “death bed confession” so that the person “got away with” really bad behavior that no doubt scandalized others. The crucifixion was the hatred of religion poured out on God in the flesh, and it did not take place in a cathedral or church of any kind, with stained glass and Christian music.

I hope this perspective helps … by the way, before answering you, I re-read the article… in respect to you and your question. I found a number of qualifying statements that address issues that respond to your questions (in addition to the points I have made herein). Again, with respect, I took time to answer your question, if you would please re-read the answer I provided you may find a little more food for thought. You may still disagree, and that’s fine. You may be right and I may be wrong. Wouldn’t be the first time. But there is also the possibility that you have some wrong-headed, un-Christlike views, provided by the legalistic authorities of religion who ride around on their high horses, feeling great about how good they are because they are not “like other people – robbers, evildoers, adulterers…” (Luke 18:11).