Q & R: Why the Prophetic Directives to Destroy? — Brad Jersak 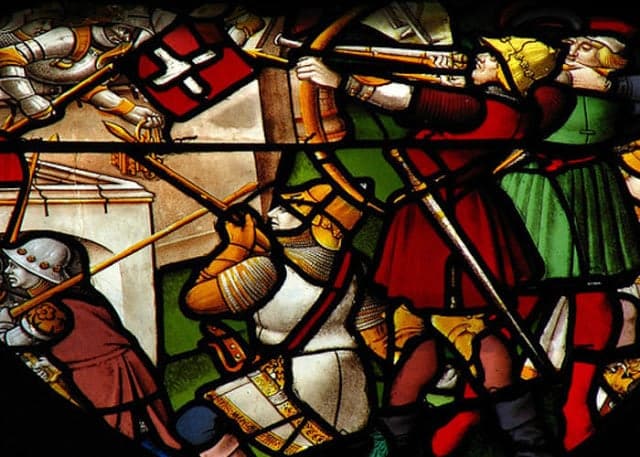 I just finished reading your new book A More Christlike God and I loved it! I have a question and want to see if you know of any resources that might be helpful.Specifically, my question relates to certain stories in the OT where God seems to give clear prophetic directives about killing every man, woman, child and animal in the city such as in the story of Joshua and Jericho. I understand that sometimes people heard God through their own “lens” and may have attributed actions/words to God that were really a reflection of their own image of God. However, what do you do with passages where there seems to be a clear prophetic directive? And where a miracle (the walls falling down) occurs? It certainly appears that God gives his divine assent to these actions. What could be some helpful rules of thumb for interpreting passages like this? My concern is that I don’t want to take these interpretive principles to an extreme and throw everything out but I still want to be true to God’s loving character (I hope that makes sense!). Any thoughts or resources you might have to shed light on this question would be so helpful!

Thanks Brad!
Bless you,
L.

Yes, I think it’s important not to let interpretive principles allow us to remake God in our own image. That said, we all have interpretive principles whether we know it or not. What I am suggesting in my book is that Christ himself is our Interpretive Principal. He has shown us exactly what God is like in his life, death and resurrection, but especially in showing us that God IS love (not just loving) on the Cross, where he utterly rejects wrath and opts for forgiveness.
So briefly, here’s where I’m coming from and how we address this with OT violence texts:
1. Having witnessed the fullness of Christ personally, the apostle John makes these points clear:
a. No one had ever seen God in his essence except Christ, and Christ alone has made God known as He is.
b. Christ made known God as cruciform Love ‘without remainder’ (which means love only, not love plus something that love is not).
c. Moreover, John would agree with Paul that ALL the fullness of God dwelled in Christ. So Christ is not just one facet of God … he is the full revelation.
d. This Christ, he says, made it very clear: it is the THIEF who steals, kills and destroys. But I [God the Word made flesh] have come to give you LIFE]. This, then, becomes our Christ-given interpretive lens for what is going on throughout the Bible.
e. That means that even when the narrator of a biblical text says, ‘God says kill and destroy,’ that narrative must bow to the living God when He came in the flesh to correct the narrative.
This is where some people balk. But if the Bible says that God says it, God must have said it, because the Bible says God said it — even if it is ‘prophetically commanding’ us to kill babies.’
But this is not how the Bible itself teaches us to read the Bible. Not only does Jesus resist this kind of unquestioning obedience; even the prophets and chroniclers of the OT do so. That’s why, in my book, I gave the example of the Chronicles correcting the story in Samuel where the earlier narrator claims God tempted David to count the mighty men, but then Chronicles changes the story (corrects it) to say, ‘Satan tempted David.’ What is modeled here is faithful questioning based on what we know of God’s character: God is not ever tempter (James 1 confirms this).
Then Jesus models this also when James and John, simply being biblical (following Elijah’s example) want to call down fire on the Samaritan cities that had rejected the gospel. The Elijah story assumes the fire is from God, James and John assume the fire is from God, but Jesus rebukes them: “You don’t know what spirit you are of.” I.e. The fire was not from God’s spirit.
This then leads to the question: Then why does the OT include prophetic commands to kill? There are a few possibilities:
1. Because God didn’t want to get his hands bloody, because that’s not holy.
2. Because God doesn’t mind getting his hands dirty, but he likes to include us.
3. Because God can do whatever he wants to do and that makes it holy.
None of these reflect anything that Jesus revealed about God. So what else could be happening? Why do the texts say these things?
1. Because we thought God wanted us to kill people for him (Still happens today! Even Christian ‘prophets’ are calling for the destruction of Islamists in spite of Jesus’ clear teaching on loving our enemies and Paul’s assertion that the weapons of our warfare are NOT the weapons of this world).
2. Because God let his children tell the story, and so if they win a battle, they assume God sent them, and tell the story to reflect that. And if they lost a battle, they assume God punished them, and tell the story to reflect that. And those stories may also include miracle stories that seem to confirm that God is the destroyer.
3. But now we know better. Jesus came and he says, ‘God is not a destroyer. God is a saviour. Look, here I am.’ And they resent him because the wanted him to save them through destruction of their enemies, but instead, he saves them by dying and rising.
4. We also see that while the ‘destroyer’ is associated closely with God in the earlier parts of the Bible (the one who killed the firstborn of Egypt), by 1 Cor. 10, the destroyer is quite distinct from God, and by the time you get to the book of Revelation, the destroyer actually comes up from the pit. In other words, the Bible progressively distances God from Satan and the destroyer.
So what do we do with those stories and prophecies. Are they not revelations of God? Or do we do toss them out? Some would like to but we MUST NOT. Why not? Because they are God’s inspired revelation about US! They are mirrors we hold up to show how addicted we are to violence in God’s name–precisely the thing that caused the Sanhedrin to kill Jesus and precisely the thing from which Paul was converted.
It’s absolutely essential that we learn this at a level we can teach our children. It’s as simple as sticking firmly to John 10:10 and where the text departs from Christ’s word, the answer to why is that, God let his children tell the story.
Please share:

Q&R "Is the Spiritual Realm more Real than the Natural Realm?" with Brad Jersak