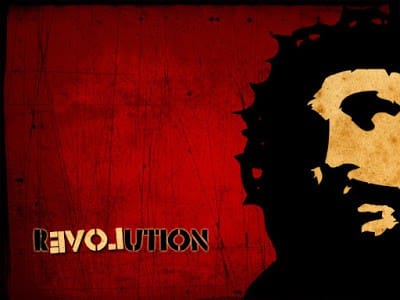 You say you want a revolution
Well, you know, we all want to change the world
—The Beatles

The revolution of Christ is the radical alternative to the unimaginative politicism of the religious Right and Left.

Jesus is not apolitical. Far from it. Jesus is intensely
political! But Jesus has his own politics — and they cannot be made to
serve the interests of some other political agenda. As Eugene Peterson
says, “The gospel of Jesus Christ is more political than anyone
imagines, but in a way that no one guesses.”

The problem with both the Christian Right and the Christian Left is
that they reduce “Christian” to the diminished role of religious
adjective in service to the all-important political noun. But as Karl
Barth taught us, God cannot serve some other interest, God can only
rule. …

The church doesn’t need to enforce this revolution, the church only
needs to live it. To those who will dare to adopt the politics of the
Sermon on the Mount, Jesus says, “You are the light of the world. A city
built upon a hill cannot be hid.” (Matthew 5:14)