Since the beginning of this calendar year, in literally every conversation I’ve had with Christian leaders and churches, two hot button topics came up, and not at my request. The questions raised were about:

Scary stuff, right? Or it used to be. What we had only whispered privately a decade ago, for fear of fomenting division or provoking reprisals, has now grown into open conversations in earnest. But despite this refreshing new boldness to voice our private thoughts, a strain of fear continues from certain quarters.

Seeking out the roots out this fear matters a lot since perfect Love (Jesus) is committed to casting it out (1 John 4:18). To this end, I had a marvelous coffee chat with Dave McFadden, a very clear-minded and open-hearted minister in the Salvation Army. He suggested three layers of fear we must work through that would otherwise sabotage these important dialogues.

Here were my notes: 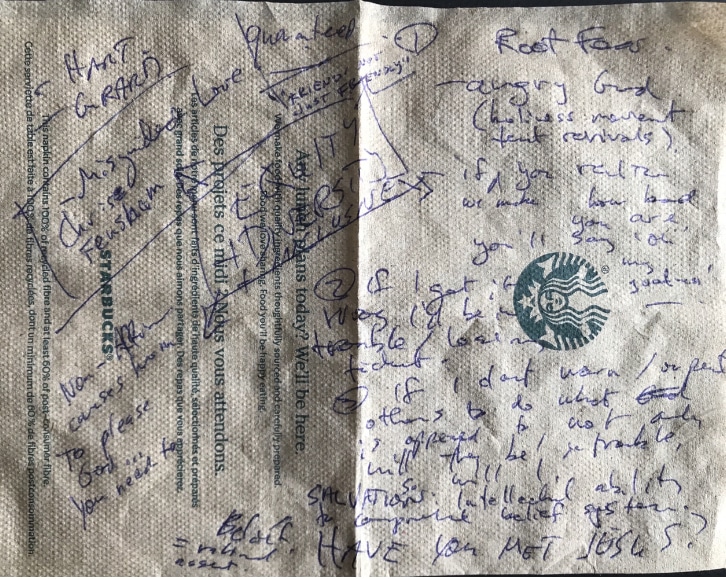 Luckily, I was able to decipher them later and transcribe the takeaways, as follows: 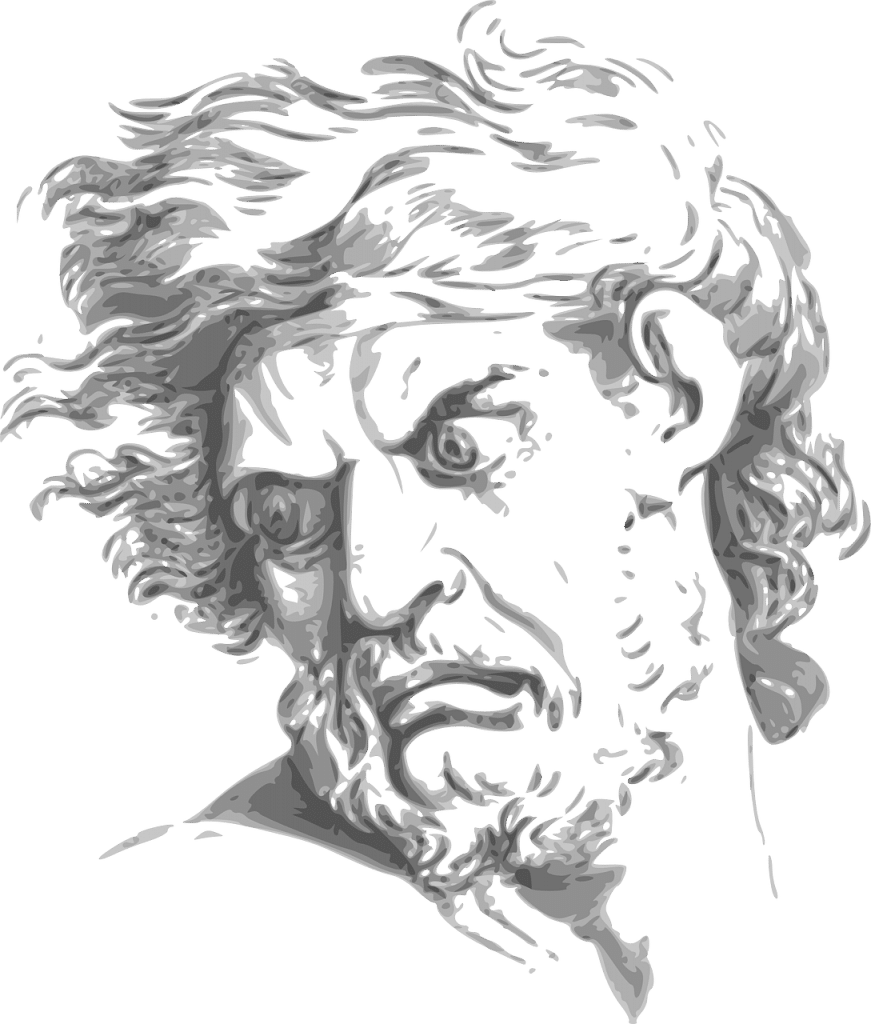 Nervous twitches around these topics are ultimately rooted in an angry image of god [sorry, but I won’t dignify this god with an capital G]. Where did we learn that faithful questioning “gets you in trouble”? Certainly not from Abraham or Moses or David. God’s closest Old Testament confidants were dear to him precisely because they did question God as those who trust that God is good. The problem was never their boldness before the throne of grace—that was not their stumble. They stumbled when assuming he wasn’t trustworthy and projected their own fears into his character.

What kind of “gospel” does this generate? It demands, first, that we convince “sinners” that they are detestable to God, worthy of condemnation and bound for damnation. Then, great news: Jesus to the rescue! He’ll save you from his angry Father. In Dave McFadden’s words, “If we make you realize how bad you are, you’ll say, ‘Oh my goodness!’ and jump to repent.” His evaluation: it’s not working and, in fact, it’s not true!

Stemming from Fear #1 follows its corollary: if God is prone to anger, then I’d better watch my step. Dave feigned a terrorized voice that I’ve heard so often: “If I get it wrong, I’ll be in trouble—I could lose my ticket to heaven.” In that model, one is already “in trouble” just by thinking the wrong things, questioning what is not be questioned, even to yourself. But it gets much worse for those who express their supposedly heterodox beliefs out loud to others. And finally, daring to publicly share them as convictions is a complete disqualifier—if not by God then certainly by your movement’s Sanhedrin. Fear of “getting it wrong” and fear of “being in trouble” are crippling handcuffs for critical thinking and the charge of “heretic” is never far away. But we’re not only responsible for our own orthodoxy…

3. If I don’t warn others about Angry-god, not only will they be in trouble, so will I.

I recall learning very early in my Christian life (as a child) that if I did not warn others about God’s anger toward sin, then not only will they be in trouble, so will I. I remember being force-fed God’s words to the prophet Ezekiel at some point during Bible camp:

“When I say to the wicked, ‘You will surely die,’ and you do not warn him or speak out to warn the wicked from his wicked way that he may live, that wicked man shall die in his iniquity, but his blood I will require at your hand’” (Ezekiel 3:18 NASB).

At the end of the day, this fearful gospel of an angry God is all about pleasing and placating. We hoped that if we believed right—believed that Jesus appeased Father’s wrath—we’d be saved. Were we? Or were we, in fact, converted to our own life-long enslavement to appeasement?

“To please God, you need to…” That’s appeasement. Believe right or God will be displeased. Act right or God will be displeased. And remember, if God is wrathful (defined as violent anger), “displeasure” does not merely indicate disappointment in God. It is a threat. Displease an angry Rottweiler and the bite will be catastrophic. What levels of infinite fiery violence would erupt from the displeasure of Angry-god!?

OR … just ditch Angry-god for Jesus 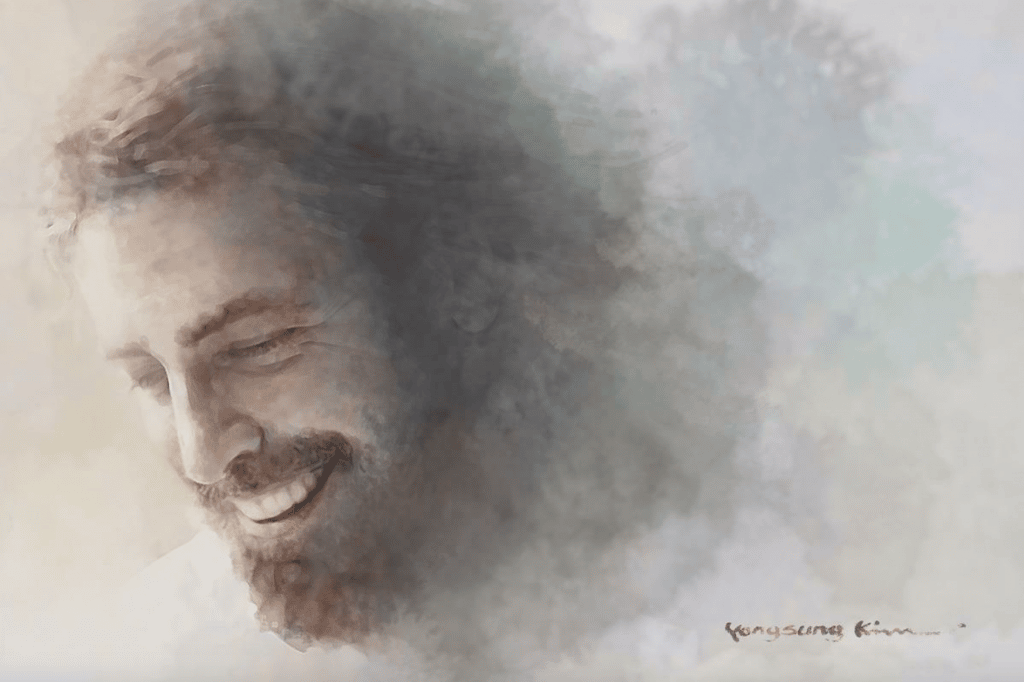 You know what? Angry-god doesn’t even exist. If he did, he’s incompetent. He should have struck down Nero and Hitler and Stalin and all the rapists and murderers and heretics like me. He didn’t. Angry-god is an imaginary bully who never shows up for the fight when you actually need him to. There, I said it. Did I make you afraid? Are you afraid for me that I said it? Are you afraid for yourself that you read it? And maybe you accidentally nodded just a little?

I’m not afraid because Perfect Love drives out fear and that Love has a name. It’s Jesus, the only face of the only God who was and is and is to come. That God is, by nature, all-merciful Love–the One who did not strike back in wrath even when humanity murdered his Firstborn. Instead, the infinite Light of God’s eternal love pierced into the very heart of our darkest abyss. That God is Almighty because when provoked to death-dealing wrath, the response was self-giving love, radical forgiveness and all-embracing redemption.

In fact, the early church taught that whatever “wrath” we attribute to God can never be taken literally. To do so, they said, is to create a blasphemoous idol. Rather, the “wrath of God” must ever only be a metaphor for Christ’s cruciform conquest of darkness, dread and death through the power of his divine Light, Love and Life. Now that’s a God I can worship with reverential awe and fearless devotion.