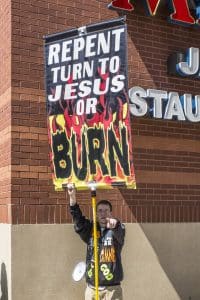 How did the good-news invitation of God’s love, revealed in the life message of Jesus, become a bad-news ultimatum, distilled crassly by “Turn or Burn” evangelists?

Sure, the hellfire evangelists love to prooftext Jesus’ own words from Luke 13:5, “I tell you, no, but unless you repent, you will all likewise perish.” I’m not at all interested in casting aside Jesus’ warnings about humanity’s self-destructive trajectories, but somehow they’ve been twisted as if they are the gospel he preached. That’s a gross misrepresentation, and I think I’m beginning to see how that error expanded into an entire pseudo-evangelistic system. A thought experiment may help clarify the problem.

First, positively, in the parable of the prodigal sons (Luke 15), the Father’s actions and words embody Jesus’ gospel. What did that look like? We see that God the Father never disowns his wayward son(s); he grieves his son(s) rebellion without condemnation; welcomes them home without coercion, and he issues an invitation without an ultimatum. The call to repentance sounds like, “All I have is yours; come to the party!” Forgiveness, reconciliation, and sonship (or daughterhood) are not something to be earned; they were never even in question. Salvation, in Jesus’ story, is a great banquet to be experienced and an inheritance to be enjoyed. That’s a beautiful gospel!

By contrast, something very strange happened to our message. The invitation became a demand with the most brutal threats we could imagine. “Come home or else!” And instead of the Father’s concern for his children’s self-inflicted condition, he was presented as the threat himself… an ominous and angry deity Jesus needed to save us from. That’s not just a caricature of evangelism; I’ve heard it directly. “Repent or God will and indeed must cast you into the lake of fire” … or even if it’s self-imposed, “Sorry, there’s nothing he can do to save you once it’s too late.”

How did we get there? Here’s my theory, extending the same parable to set up the distortion:

Imagine for a moment that the elder son, resentful of his brother’s betrayal and offended on behalf of his Father, takes it upon himself to “reach out” to his brother while he’s still out on the town, still enjoying the party, still not having bottomed out on his hedonism. The older brother sets up a personal intervention that is partly true and also dead wrong. What might that look like?

I’ve raised this thought experiment as if it were hypothetical. But isn’t that precisely what evangelism became, in fact? I’m not anti-evangelism. I love to share the good news that God loves them and invite them to his banquet of grace. My critique is a reflection on how modern notions of evangelism look so much more like the elder son’s issues than the Father’s love. And, as in the context of Luke 15, that’s Jesus’ specific call to repentance. I’m in.