What do we do with Scripture when even Jesus seems unChristlike?

I can think of a good number of occasions where Jesus seems to either depict his Father as harsh and brutal (if we incorrectly read the king/master parables as straight-across imagery for God) or seems quite “judgy” himself, to the point of what we imagine as unChristlike. While many such verses can be chalked up to rhetoric, hyperbole or figures of speech, sometimes they do seem over the top, particularly in the letters to the seven churches of Revelation (chapters 2-3).

If Christ reveals the nature of God as love, as cruciform (cross-shaped) and as non-retributive, then this section from his scolding of Thyatira seems as fiery as his eyes and as brazen as his feet (2:18). Picking up on his condemnation of some mysterious “Jezebel” I will start with verse 22-23:

Harsh! And indeed, the intensity of the rage I think I hear in these words is “wrathy” indeed. It’s as grim as nearly any of the Old Testament judgments texts and seems to far exceed anything we’d expect in the New. And it’s not just that those verses are incongruent with my theological sentiments or my own experience of the Christ. They sound altogether different from the voice of Jesus of Nazareth recorded in the gospels–even when castigating his opponents.

This raises questions as to why. Don’t worry, these questions aren’t intended to be dismissive of the text as it stands, but they do require attention:

1. Does this retributive, actively violent tone reflect the Jesus of the Gospels? Certainly not. During the Incarnation, Christ is very clearly cast as a healer and life-giver, not one who sends sickness and death. His agenda is peace and reconciliation. When he confronts opponents, he doesn’t threaten them with harm or violence, least of all directly. His final word on sin is forgiveness–revealed, totalized and universalized on the Cross. And of that Jesus we read, he is “the same, yesterday, today and forever (Hebrews 13:8)!

The exception is when Jesus speaks in parables that describe a king or master who judges enemies, excludes the unfaithful, or even sends an unforgiving servant to be tortured. But those parables are not straightforward revelations of his Father or of God’s response to sin. Jesus is God’s response! And so the Cross becomes our consistent punchline, especially to these parables. What will the divine Owner of the vineyard finally do when the stewards ultimately kill his Son? Not what we expected! God the Father turns the murder of his beloved Son into the very occasion of their redemption.

2. Does this retributive, actively violent tone reflect the apostles’ testimony or their theology? Almost never. Not at this level. Yes, very occasionally the apostles Paul, Peter or Jude use the language of destruction and wrath for those who persecute God’s children and they vehemently warn their brothers and sisters not to turn back for fear of experiencing the same. But these texts are embedded in the genre of “epistolary rhetoric” where the threats are always paired in context with verses extending encouragement, hope and comfort. And while the rhetoric of judgment is not empty, it is certainly penultimate (second to last) and ultimately restorative. The urgent warnings offer a path of redemption (explicitly illustrated in Paul’s conversion).

3. Does this retributive, actively violent tone express either the Jesus of John’s Gospel or John’s own voice as seen in his epistles? Not remotely. John the Beloved did not previously know this type of Jesus nor did he emulate this level of vitriol. It is a very poor match to everything we know of the Incarnate Lamb, slain and risen, and runs explicitly counter to the Father revealed by Christ elsewhere in the Johannine corpus.

So what’s going on? These facts urge us to press the issue. We can only take these words at face value by negating other key texts and creating a whole new set of theological problems.

1. Could it be that this unChristlike portrait disqualifies the Book of Revelation from the canon of Scripture? Enough early Christians thought so that despite its use in the church through the first centuries, it was not formally canonized until late in the 4th century and even then, under a lot of protest by central leaders in the church. While this may be a good reason to avoid generating doctrine from the Apocalypse, the fact is that all Christian churches did, in the end, receive this book as authoritative and it became part of our Scripture. I’m not about to exclude it now.

2. How can we account for the incongruity between the Incarnate voice of Jesus and the Apocalyptic voice of Jesus? Is the difference because the latter is written by an author other than John? Is the difference because the latter comes via a prophetic vision rather than directly from the Gospel Christ who spoke firsthand? Does the second-hand visionary nature of this voice pick up the tones and emotions of the prophet who spoke them? Does the book’s apocalyptic genre also create a more apocalyptic tone of the speeches? Are we dealing with amplified wrath as rhetorical, or hyperbolic or symbolic? Is Jesus here speaking metaphorically of Jezebel, sickness and death? Is the wrath to come actually passive (spiritual consequences self-inflicted)? And when we see in verse 24 that the sin involved is “plumbing the Accuser’s depths,” what was really going on? It’s such a mysterious and obscure reference … but also something that Christ says he will finally conquer and empower his children in Thyatira to conquer. Let us never forget how Christ conquers!

In the end, I must read this strange and apparently violent passage through the grid of the crucified and risen Lamb and his revelation of divine love and forgiveness on the Cross. John 10:10 tells us that Jesus is a life-giver and not a death-dealer … and theologically, he put Death to death in his own death. And here, we rely on the central cipher of Revelation to confirm this: the Lion of the tribe of Judah has already secured his victory by means of his sacrificial death as the Lamb slain from the foundation of the world. Thus, the sword that slays the Beast and his followers is the Word of the Gospel that proceeds from the mouth of the divine Warrior. His robe is drenched in blood, but it is his own blood, already there before the final battle.

And so, far from sloppily trying to make hard passages fit our ‘nice’ image of Jesus, such texts require that interpret them with the rigor of those devoted to God’s self-revelation on the judgment seat, which is to say the mercy seat, of the Cross. 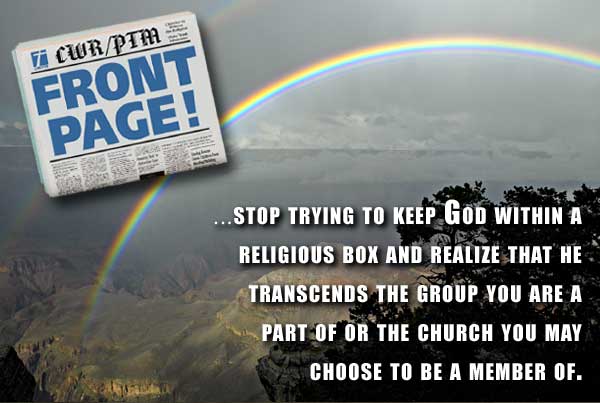