“Why her?” On grieving the departed – Brad Jersak 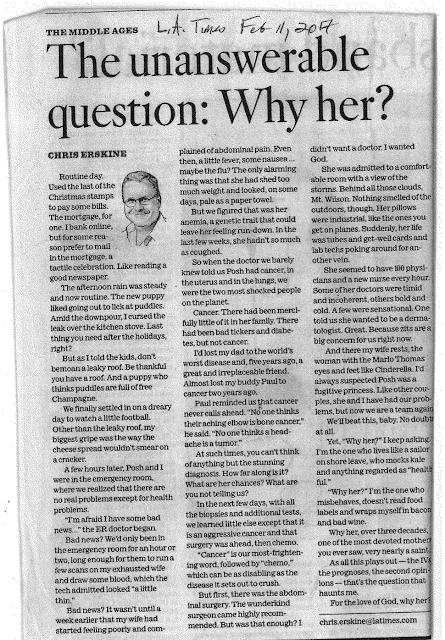 “Why her?” is a common and important lament. Chris Erskine’s LA column on that unanswerable question is a masterful and sensitive treatment.
“Why her?” It’s a natural cry when we lose someone we love — someone to whom we ascribe worth — someone whose life is ‘taken’ from a family and a community where we still know in our hearts they are needed. It’s an important cry of the heart that ought not be squished and cannot be answered … But having been uttered, some of its toxic assumptions need a sensitive, wise response.
“Why her?” implies a kind of selection process. “Why her and not someone else?” Or “why her at this time?”
But where there’s a selection process, there’s a Selector — whether the fates or the death angel or the gods — and so sometimes the question is amplified to “Why did God take her?” You can even use Bible verses to talk about God “numbering our days,” for example. And this is where things may get ugly. As life-giver, God also seems to be the life-taker. “He gives and takes away,” says Job when calamity took his children, his livestock, his estate and his health.
But is that literally true? Some find comfort in “God took her” because then in spite of the loss, God is still “in control,” whatever that means. “God took my son” may bring peace to such people. But also deep resentment if we’re honest. “What kind of a God would take …!?
The alternative is also ugly, because death sucks no matter how you slice it. But it’s also more likely true and ultimately contains some hope of redemption. The truth is that “Death took her” or “Death took him.”  It takes everyone eventually. Death is an enemy and it strikes randomly. It is not selective. Toddlers drown in hot tubs, pregnant moms are killed in car accidents, bridegrooms drown on their honeymoon.  I’ve seen all these things. Why them? The “why” calls for a sense of order in the chaos. None is forthcoming.
But in the darkness of the shadow of death, there is a Good Shepherd who has experienced death himself. Why him? Because he wants to hold the sobbing survivors in his arms, walk the dying through the valley, and is able to redeem them from death through resurrection. This is good news — it neither precludes death nor eradicates grief — nor should it. But perhaps it takes out the venomous stinger of despair if death were to mean non-existence. It does not. Beyond the gates, there is real repose “in a place of brightness, a place of refreshment” in the presence of God. We believe this. It’s not fairy dust. It’s resurrection after the order of the Firstborn from the dead “who now holds the keys of death” and “tramples down death by death and upon those in the tomb bestows life.”
“Why her?” Because everyone dies. “Why now? Why this way?” Because life is hard and death is a curse … but not from God and not the final word. The better question might be, “Where is God?” But only if it’s not asked rhetorically as an accusation of absence. That would just be another form of despair. In we ask with an attentive, receptive heart, and are willing to count God’s movements in the loving comfort of those who wipe our tears, the response may come, “God is here, even in the dark” — “to shine on those living in darkness and in the shadow of death” (Luke 1:79).
Please share: