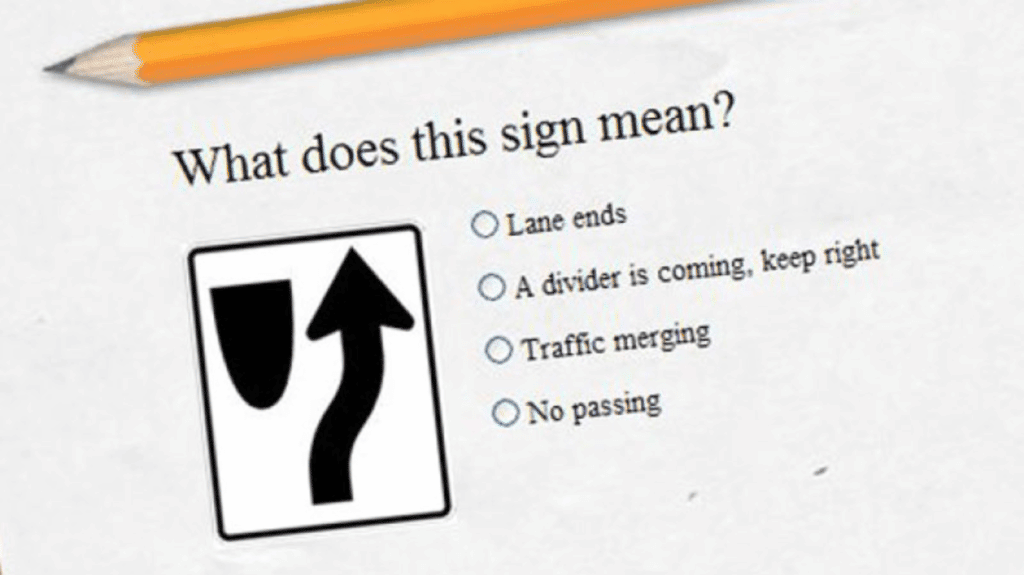 Will You Get Enough Right Answers?

My driver’s license is expiring in a few weeks. In the past, my license expired every five years and the state of California automatically renewed it and sent me a new one in the mail.   But now, knowing I have passed the exalted age of 70, and apparently completely oblivious of the legal implications of age discrimination, the good people of California have determined that I and other old codgers like me must have my vision and knowledge tested to see if we are worthy of sharing the road with all the careful, cautious and patient younger drivers we encounter every day.

I made an appointment and showed up, along with half the population of Los Angeles who decided to come to the DMV on the same day.   I had my eyes tested and purchased new glasses a few months ago so I passed the vision test.  After I read the eye chart correctly a nice lady took my money and my thumbprint.   I posed for a new picture for my photo ID… then I was directed to the room where the dreaded “knowledge test” is administered.  When I entered the room I immediately sensed fear and high anxiety. People were huddled around computer screens, answering questions about the driving code of the state of California. The “knowledge test” is on a touchscreen, and you are allowed a certain number of wrong answers – if you exceed that number then you fail and must arrange for another test.

After passing my touch screen knowledge test (I did have one wrong answer) I was waiting in the last line (in that office at least) … this line is for a temporary paper license which is valid until the state of California sends the real deal in the mail.  The man behind me also just turned 70 and he asked me how stressed out I had been at the thought of having to pass this test.  I told him that since I have two grandchildren who just received their driver’s license, the thought of the humiliation of failing my renewal had crossed my mind.  He told me he could not believe how worried he had been and how hard and long he had studied to make sure he passed.

So many people, including Christ followers, lives their lives paralyzed by fear.   They fear making too many mistakes and not making the grade.   They fear that God will revoke his license of love and refuse to forgive them and probably never ever answer their prayers if they don’t measure up to his standards.

Some Christ-followers have performance-based anxiety – they fear a monster God who is filled with wrath and cannot wait for an opportunity to punish them.   They believe God will not be happy unless and until they fulfill a long list of religious obligations and laws – and maybe after they obey enough of them they just might manage to appease his anger.

Some friends of mine have confided in me they are “cramming for finals” since they feel they have now turned the final turn on the track and can see the finish line of their lives.  They are studying hard so that when they die and when St. Peter welcomes them to the “knowledge test” they will enter enough right answers on the computer screen in heaven and God will (maybe reluctantly) allow them into his eternal kingdom.

A lady I know told me her pastor seems to think that she and others in her small congregation don’t have a correct understanding of all of the complexities of God’s Trinitarian nature.   She says that the Trinity is all he preaches about.   She says her pastor seems convinced that it really matters to God if she has enough of the right answers about the Trinity.  She is worried because she doesn’t completely grasp how God is Triune, at least at the level of the pastor who seems unable to overcome his seminary training.   She is deathly afraid that she must achieve a better and more perfect academic understanding of God or God will never let her “in.”

So God is holding the fact that we might not fully understand him over our heads?   Immature teenagers throw tantrums and complain that people don’t understand them – that’s not an attribute of God, who, for the record, is, as I perceive him, best understood as Father, Son and Holy Spirit.  I have no issue with that.   But, you want a better understanding of God?  He is not an immature, hormone-driven teenager who holds you hostage until you understand him better!

Please, enough already!  So I am to believe that God will never be fully happy with us until we understand and memorize ancient creeds?  God will never fully accept and embrace me (or you) unless and until we arrive at an academic plateau of theological and philosophical understanding, as taught by some long deceased theologian, about who God is, exactly, and precisely how he is who he is??

So God does not fully love you and me until we study at the feet of the correct and best theologians and recite their wisdom as if it is our own? Any god who refuses to love you and me unless and until we fully understand his full eternal and divine identity is more like Hitler or Stalin than our heavenly Father.

You need not be worried that God will not love you unless and until you give him the right answers on a theology test.

You probably remember Jay Leno – the comedian who once served as the host of the “Tonight Show.”

Jay Leno’s mother was an immigrant to the United States.   She lived in constant fear of being deported… even after she passed the citizenship test.

Just after she came to the United States Jay Leno’s mother took the citizenship test, and she was allowed four wrong answers … but she missed five.   She flunked.  The question she got wrong was “What is the Constitution of the United States?”

But the judge denied her citizenship … the answer to the question about the Constitution the test for citizenship was looking for was of course about the legal document that outlines the supreme laws of the United States, defining the duties and constraints of government and the fundamental rights of citizens.

Jay Leno’s father was outraged so he argued with the judge, because his wife, Jay Leno’s mother, actually had given the right answer – the Constitution is a boat/ship docked in Boston.

So the judge relented and Jay Leno’s mother became a citizen.   But for the rest of her life, because she barely passed the citizenship test, she worried that one day the government would deport her.

According to Jay Leno, from that day forward everytime his mother passed a policeman she quaked with fear – thinking she might be arrested and deported.

53 years later Jay Leno wanted to treat his mother to a trip back to her native Scotland, but she was worried that if she went she might not be allowed back into the United States.

Jay Leno reflected on his mother’s fear – “It never ended,” he said.   “My Mom always lived in fear that she didn’t get the right answer.”

Jesus didn’t say if you come to me after having worked hard enough and proven to me that you are worthy of being loved and accepted then I will give you rest.

Jesus didn’t say that if you come to my heavenly DMV and take a knowledge test and you are able to give enough right answers about God and the Bible then I will renew your license and then give you rest.

Jesus didn’t say we become citizens of his kingdom if we miss no more than four questions on the citizenship test, but if we miss more than that, we will be on the outside looking in.

Focus on Christ - Not on Fear

Do Not Be Afraid

Focus on Christ - Not on Fear!

Do Not Be Afraid - Greg Albrecht