Lately, I’ve been noticing subtle differences between the popular ‘spirituality vs. religion’ and ‘faith vs. religion’

Some prefer ‘spirituality’ because it only implies one’s own spiritual self or soul (sans any god at all). So hiking the mountains is ‘spiritual’ because it nurtures the soul. True enough. However,  I personally prefer to speak of ‘faith’ because my spiritual self or my soul has been freed and fed by a Love greater than my own … and indeed, faith freed me from religion in a way that spirituality hadn’t. As one Orthodox priest says, ‘Religion is a neurological disease and faith is its cure.’

I’m also conscious that there can be positive takes on ‘religion’ — as in the encyclical of St James, where it amounts to practices of compassion and empathy). Religion in that passage is more a neutral word for ‘faith practices’ but only IF one adds the right adjective. And so when we critique ‘religion,’ we typically attach negative adjectives, such as ‘toxic’ or ‘moralistic’ religion.

Many such adjectives exist, but I’m starting to think that some of them actually hide the real problem of toxic religion in a sneaky way. For example, we often castigate ‘organized religion.’ But is the problem that it’s organized? Some faith communities are simply organized enough to gather and become a safe place from spiritual abuse or religious domination. And being ‘disorganized’ would be of no advantage to such dangers.

Other times we critique ‘hierarchical’ religion … I must say that hierarchy can be and has been the venue for all types of brutality. But so has anarchy. In fact, at times the ‘hierarchy’ in my faith tradition has been the main instrument protecting me from spiritual abuse, rather than afflicting it. I would say the limited ‘hierarchy’ of some ‘organizations’ makes them safe and also efficient. For example, my experience of PTM.org, which champions ‘Christianity without the religion,’ is that it has a clear structure with a caring and non-controlling ‘chain of command’ … Greg Albrecht is a real leader (no anarchy there) and Laura Urista is a brilliant manager (no disorganization there) BUT they cannot be charged with ‘religion.’  So structure or lack of it may or may not be a problem, but fixating on that may also mask the real and deeper insidious side of religion when things have gone awry. 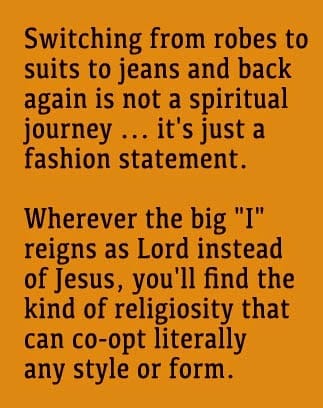 So the trickier question is what real toxins might lurk behind our secondary misplaced adjectives of organization or hierarchy?

While many negative adjectives for religion do apply (toxic, abusive, etc), we’ve found the most poignant descriptor is ‘Christless religion.’  This is always the central issue and extremely important to keep in focus. Why? Because one might think they’re escaping religion just by moving from one religious form to another. Shifting religious forms and styles doesn’t help at all if the new form or style is still Christless. For example, whether formal vs. informal, or cessationist vs. charismatic, Christless religion can always permeate and dominate, wherever the self-righteous ego (whether in the leadership or my own own) has bumped Jesus from the throne. Switching from robes to suits to jeans and back again (as I have done a few times) is not a spiritual journey … it’s just a fashion statement. Wherever the big “I” reigns as Lord instead of Jesus, you’ll find the kind of religiosity that can co-opt literally any style or form.

I think David Hayward’s cartoons really magnify the importance of this observation, because they often clearly set off Jesus or the Trinity against the religious establishment or church-as-status-quo. Notice his standard: it’s Jesus. And notice the problem he raises: Jesus is outside the building, which represents the people of God reduced to a corporate establishment).

But here’s the punchline. If Christ is the standard, then I think we’re right to be leery, not only of Christless religion, but also Christless spirituality … because that void will always be filled by something ‘maleficent’ … in Christless religion, the throne is often co-opted by oppressive leaders or restrictive laws … but also by a sense of being ‘cutting edge,’ ‘having arrived,’ or whatever self-imagined super-Christianity we’ve imagined. That’s pure religious ego.

But also, exactly the same holds true for spirituality … a Christless spirituality is not freedom from religion, if the real problem with religion is that it’s Christless. Spirituality can simply become the new prison of the soul, ruled by an oppressive ego (which will sound like self-hatred, self-pity or self-importance — all symptoms of serving self-righteousness). And in such a case, spirituality without religion is nothing more than a leap from the frying pan to the fire. The worst part is, the spiritual ego actually thinks it’s free, unlike those poor prisoners over in the religious wing of the jail. This too is a delusion. This too requires liberation.

Or at least I did and do … and that never happens simply by fleeing from one system of self-righteous to another. The true prisonbreak only finally comes by grace through Christ-centered faith that frees us from self-imposed or others-imposed cells of both Christless religion and Christless spirituality.