Does God Save Us from God? Brad Jersak 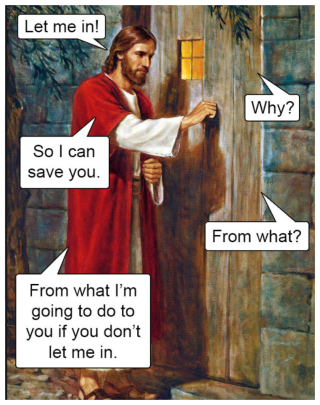 Does God Save Us from God?

Twitter statement: “God saves us from God. The One who mercifully drags us out of the rebellious city is the same One who rains down fire upon it.”

Thus wrote a popular tweeter whose handle I’ll withhold out of respect and concern.

God saves us from God? How so?

Penal substitution continues to be the most popular Western answer to the question, “Why did Christ die?” and is the default interpretation for Scripture’s assertion that “Christ died for our sins.” Rather than treating it as one of many atonement theories, major denominations are now doubling down, dogmatizing it as a non-negotiable essential to the gospel and thus, to salvation. If it IS the gospel, then those who don’t affirm it are not even considered “saved.”

But penal substitutionary atonement (PSA) as the uncritical masses understand and proclaim it is neither necessary nor glorious. I’m not referring to the rarefied versions of nuanced academics such as Fleming Rutledge or N.T. Wright. My ongoing critique is of the dominant expression we hear from 10,000 pulpits, public broadcasts and now social media across popular Christianity.

The prevalent expression of PSA can be distinguished by its insistence on “wrath appeasement,” decried even by Wright as “paganizing the gospel.” Yet beneath the question of wrath lurk deeper and frequently overlooked theological perils—the ancient heresies refuted in Nicaea and Chalcedon resurface as assumptions that need to be challenged.

Specifically, intrinsic to common PSA is a dangerous suggestion of divisibility in either the Trinity and/or the personhood of Christ. Either or both errors appear inescapable to PSA and I’ve yet to see a response that takes these problems seriously.

TRITHEISM: First, no matter how we spin the Son’s willing conspiracy with the Father to sacrifice himself for humanity, if Father and Son are separated in any way during the Passion, the indivisible unity and operations of the Trinity are severed. The tri-personal God—one eternal being and divine identity—ceases to be one God. If the Father afflicts something on the Son that absences the Father from the Son’s experience, whether an outpouring of wrath or actual abandonment, then the Trinity suffers a rending (however brief) and the three persons are no longer one inseparable God. That’s Tritheism, a formal heresy that we need not need retry, if orthodoxy means anything to us.

ARIANISM: Second, pop-PSA takes quite literally Paul’s statement that Jesus became sin and a curseas if he were ontologically transformed into something other than God—less than God. We’re told a holy God cannot tolerate sin and must punish it—he can neither look on it nor overlook it. Thus, as Christ bears and becomes sin—when PSA’s all-holy Father unleashes all hell on the sin-cursed Son—Jesus becomes something different from the Father. Someone lessholy and less divine than God, at least for several hours. As Christ hangs on the Cross under the judgment of God’s wrath, how can he remain “fully God”? By this logic, he can’t. That’s a form of Arianism, anathematized prior even to the canonization of the New Testament.

NESTORIANISM: One workaround to this problem is to divide the person of Christ himself. Christ is both fully human and fully divine, so it’s tempting to divide the two natures and assign sin- and wrath-bearing to his human nature alone. If he only “becomes sin” and endures the wrath of the Father in his human nature, then Christ’s divine nature need not be tainted. But this is again to divide the indivisible. As Cyril of Alexandria said (and the councils affirmed), Christ is one. The two natures of Christ cannot be separated without making Christ two persons. That’s Nestorianism, another refuted heresy. To imagine the crucifixion event as solely the experience of Christ the human, rather than Christ the one divine-human Person, is to sever the hypostatic union.

Either God hangs on the Cross or God does not hang on the Cross—PSA cannot have it both ways.

Aside from its deep theological perils, popular PSA is just as treacherous pastorally. How so? By painting the Father as unable to forgive without satisfaction through violent retribution. The debate over this has featured more heat than light, more pontificating than listening, and my own assertions are no exception. It’s hard not to react when proponents of PSA claim that non-adherents are enemies of the Cross or not Christians at all.

While many have abandoned PSA as essential gospel preaching, some ex-PSAers seem to flail about in the aftermath with no good response to the questions, “Why did Christ die?” or “How did Christ die for our sins?” Their inability to articulate something more beautiful and glorious that PSA is an indictment of our ignorance of the central theology embedded in historic Christianity and its liturgical heritage.

We offer a primer on why Jesus died in this blog: https://www.ptm.org/why-did-jesus-die.

Why Did Jesus Die?—Brad Jersak from Plain Truth Ministries on Vimeo.