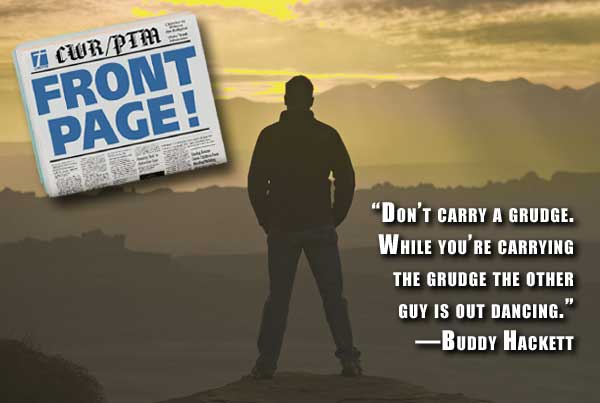 In her book, Tramp for the Lord, Corrie Ten Boom says that God takes our sins and buries them in the deepest ocean, and then he posts a sign that says, “No fishing allowed.” Unresolved bitterness, whether toward another human being, dead or alive, or toward ourselves, can cause us to live in torment. Bitterness is a prison where our spirit, our soul, is in bondage— being slowly devoured like a cancer. It is a dark and desperate place of depression and anxiety. In such a place we are overcome by guilt and shame.

Each of us must make a decision. Will we accept or reject the forgiveness God offers to us? Will we trust him implicitly—will we accept the fact that Jesus has taken care of all of the ugliness and evil of our lives and forgiven it with the love he demonstrated on his Cross—or will we continue to insist that we must somehow muddle through our own lives, trying to make restitution in our own way?

Accepting God’s forgiveness means that we will not wait for an apology to come from the person whom we believe has wronged us. It could be that the individual who offended or wronged us didn’t mean to harm us in any way—they may not even remember the incident! In such a case we will wait in vain for them to ask us to forgive them. We can also wait forever for an apology from someone who truly did abuse us—who caused us perhaps physical as well as emotional pain and grief—but many such individuals will never ask us to forgive them.

In some cases we hold ourselves hostage. We can fail to fully embrace the totality of the sacrificial love of Jesus Christ, and in so doing we determine that God is not strong enough or big enough to forgive us. It’s the ultimate end of performance-based religion—we simply cannot believe that God has enough love and grace to forgive us, so we reject his offer of freedom and instead continue our life of imprisonment in the shame and guilt of our past.

Forgiveness is a gift of God—a gift that we either choose to accept or reject. If we choose to accept God’s forgiveness, then we choose to believe and trust that Christ in us will enable us to treat ourselves and treat others with the same love he has lavished on us. We can overcome bitterness and resentment because of Christ, in Christ and through the new life he lives in us.