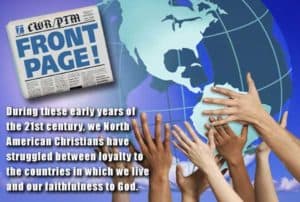 Then the Pharisees went out and laid plans to trap him in his words. They sent their disciples to him along with the Herodians. “Teacher,” they said, “we know you are a man of integrity and that you teach the way of God in accordance with the truth. You aren’t swayed by men, because you pay no attention to who they are. Tell us then, what is your opinion? Is it right to pay taxes to Caesar or not?”
But Jesus, knowing their evil intent, said, “You hypocrites, why are you trying to trap me? Show me the coin used for paying the tax.” They brought him a denarius, and he asked them, “Whose portrait is this? And whose inscription?”
”Caesar’s,” they replied.
Then he said to them, “Give to Caesar what is Caesar’s, and to God what is God’s.”
When they heard this, they were amazed. So they left him and went away.—Matthew 22:15-22

That being said, our dual citizenship, as a citizen of heaven and as a law-abiding citizen of an earthly government, can present challenges.
Within countries like the United States and Canada we, as Christians, are allowed, even encouraged by the laws and constitutions of our countries to voice our opinion. We may voice a dissenting opinion on a variety of issues that our government may support, including that of any specific war in which it chooses to be involved.
We may, and I believe we should, serve as a moral conscience to our nations, our states and provinces, our cities and villages.
We may, without becoming self-righteous, condemning “party-poopers” make our understanding of the teachings and standards of the kingdom of God known.
We may, and I believe we should, raise questions about morality, ethics, the rights of the poor and the greed and lust of corruption.
Christians should find themselves concerned about protection for those who are innocent, including children. We should be concerned with those who are victimized by crime or by any legal or illegal force.
Christians are rightly concerned about the plight of our environment. Christians have historically been at the forefront of building and staffing schools and hospitals. The needs of the hungry and the sick are issues that are at the heart of the gospel of Jesus Christ.
Christians support efforts, whether they will ever completely and totally succeed or not, to help eradicate diseases that threaten so many parts of our world today.
Issues such as these can be purely political, they can be purely Christian, or they can be both. We as Christians should not turn a blind eye to those who are hungry, thirsty, naked, sick, in prison, homeless, orphans or the abused (physically or religiously). In Matthew 25: 31-46, in the parable we call the parable of the sheep and the goats, Jesus clearly gave us direction to be involved in such noble causes.
3) Jesus tells us,

“Peace I leave with you: my peace I give you. I do not give to you as the world gives. Do not let your hearts be troubled and do not be afraid.” —John 14:27, my emphasis

This powerful, inspiring teaching of Jesus is far-reaching. When we think of peace in our world we usually think of the political and diplomatic process. But Jesus tells us that he gives us another kind of peace. Jesus tells us that he is not giving us the peace that is normally understood and defined as the period of time between two wars. The absence of hostilities is the best that the kingdoms of this world can give.
The peace Jesus gives us comes to us as a divine gift, from the Prince of Peace. The peace of God is, to use a Hebrew word, the shalom of God. Shalom means more than just external peace, it refers to internal peace, the peace of the soul.
It is this peace, the peace of our Lord, that the kingdom of God gives. The peace of our Lord is a peace that is both internal and eternal. Thus our prayer is much like that famous prayer of St. Francis of Assisi, who said “Lord, make me an instrument of thy peace.”