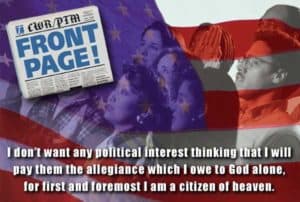 For, as I have often told you before and now say again even with tears, many live as enemies of the cross of Christ. Their destiny is destruction, their god is their stomach, and their glory is their shame. Their mind is on earthly things. But our citizenship is in heaven. And we eagerly await a Savior from there, the Lord Jesus Christ, who, by the power that enables him to bring everything under his control, will transform our lowly bodies so that they will be like his glorious body.—Philippians 3: 18-21

From the time I entered the mysterious world of adolescence, watching the 1960 political conventions on television, politics has always mysteriously attracted me. Politics has been one of my personal fascinations that I liken to that of the death wish of bugs on a hot summer night as they do their death dance, flirting with those electrified bug zappers.

Every time we have a presidential election I find this fatal attraction sucking me into the black hole of partisan rhetoric again. I don’t mean to infer that it’s wrong for a Christian to be politically involved. Some Christians believe that they should not only vote but be politically active. I recognize that perspective and respect those who hold it, but I still have reservations about jumping into bed with the bug zapper.

What does it mean to be a citizen of heaven?

As you probably know, it’s still difficult to convince some American Christians that it’s okay to vote for anyone or any cause that is not Republican. For many Christians God is a Republican (or do some actually think, I wonder, that the Republican party is God?!).

Our passage today informs us that one-sided partisanship for any one political party, no-matter-what, is out of character with our citizenship in heaven (Philippians 3:20).

I believe that blind allegiance to any political interest can be a fatal attraction that leads us away from Jesus into the clutches of the state.

When you hear the two words fatal and attraction linked you may think of a movie by that title. The movie, you may remember, teaches the lesson that those who think they own you may wind up stewing your pet rabbit.

I don’t want any political interest thinking that I will pay them the allegiance which I owe to God alone, for first and foremost I am a citizen of heaven.

Neither a political candidate nor a political party can replace the kingdom of God. There is no New Testament teaching that requires Christians to attempt to influence or change political institutions.

I am thankful that I live in a country where a separation between church and state exists. After all, the church needs to be protected from the state. Some Christians will hear me say that and nod their approval. But then, if they let me keep talking, I almost always add that this safeguard goes both ways.

It is also a blessing to live in a country where the civil government is protected from the church. History records what happens when such checks and balances do not exist.
In fact, the situation in our world today with religious fundamentalism and extremism presents an even more contemporary, compelling and chilling illustration of what happens when religion runs wild. I believe the church, the body of Christ, best functions in its culture as a believing minority, rather than a moral majority.

We are described within the pages of the New Testament as pilgrims, strangers, resident aliens and ambassadors, rather than wheeling and dealing political power brokers.

Even though we have, here in the United States, constitutional amendments separating church and state, we still have significant cross-over. Many churches today fly American flags and sing patriotic songs. Presidents, and other politicians, often conclude important speeches with the words, “God bless America.”

This idea, in terms of Christianity, started almost 1,700 years ago, with a Roman emperor named Constantine. Constantine made the Christian faith the official state religion. When you realize the horrible persecution, torture and deaths that Christians had suffered at the hands of Rome until that time, you might think this was a great victory.

But there are always two sides to any coin. All Constantine did was to unite his kingdom through religion. Christians at that time were weary and tired of persecution, and all too willing to be given protection and peace under the authority of the empire.

So Constantine started a Christian kingdom on earth, a church-state union with civil and religious rulers and leaders who made decisions for everyone in the empire. Christians no longer had to ponder, pray and consider God’s will, they simply did what the state and the official state church said to do, after all, everyone was Christian. Or were they?

Did that mean, from that point on, that every civil and every religious ruler carried out God’s will on earth?

Over time Christians started to ask—”If a Christian nation and empire really followed Jesus in every way, then would it go to war?”

Here are some conclusions I have come to as a Christian:

Beyond that I believe that Christians may determine for perfectly valid reasons not to vote at all.

As a Christian, I believe I have no duty to force the culture in which I reside to live as a Christian society.

When any humans, Christians or otherwise, get the idea that their main identity comes from the rightness of their behavior, sooner or later they will begin to believe that they have a right, a duty, perhaps even a divine calling, to force others who do not see things the way they do to behave as they do.

When people become convinced that their idea of right and wrong and of truth is the only way, they will form party lines and establish boundaries. They will draw lines in theological and philosophical sand, they will legislate moral principles and require religious “guidelines” as they do their best to turn other people into the same judgmental, self-righteous individuals as they are.

As followers of Christ, we live Christ-centered and grace-based lives in such a way that his love for all mankind is known in and through our lives. This is in marked contrast to the reality present within some of Christendom, where abrasiveness and in-your-face political dogmatism is seen as a litmus test of membership in some churches. You see, my liberty in Christ means that I afford liberty to others when their political opinions and convictions conflict with mine.

For me, my freedom in Christ allows me the choice to refuse membership in a political party. I don’t suggest that my decision is better than yours, it’s just a decision to which I have come. I am an independent voter. When I vote, I vote for the cause or the person, not the party with which they are affiliated. If I vote, I vote for issues and individuals in spite of their connection with a political organization.

I believe that we, as Christians, are citizens of heaven. We are strangers here on this earth, pilgrims and resident aliens. As Christians we don’t see any human government as the perfect embodiment of God’s kingdom—instead, we are called out of darkness into his wonderful light (1 Peter 2:9). We don’t believe that God is a respecter of persons. We don’t believe God has national or racial favorites.

As Christians we are citizens of a different kind of kingdom. There are many practical implications of being a Christian on earth today. If we are truly Christ-followers, if we read the New Testament carefully and we are truly united with Christ, then:

• We will want as many as possible to be a part of God’s heavenly kingdom. We will not attempt to keep people out of his kingdom—we will rather welcome them in.
• We will pray for our enemies.
• We will not automatically line up to go to war, but we will sorrow over injustice. We are defined more as peacemakers than we are as political and military soldiers. Our warfare is with those who oppose our king, King Jesus, and our warfare is primarily fought on spiritual battlefields, as Paul tells us in Ephesians, not on physical killing fields.
• We will take up the cause of the poor, the disenfranchised, and the diseased. We will share with those in need.

An alien is a person who often speaks a different language, may wear different clothing, usually likes different food and observes different social customs, someone who comes from a different place. Their citizenship is still with that country and culture.

If you become a citizen of the United States you must renounce your former citizenship, but if you live here as a resident alien, you agree to be law-abiding, supportive of the government, but yet you retain your loyalty for a different kingdom.

Spiritually, that’s what we as Christians do. We are resident aliens. No matter where we live as Christians, no matter what country or nation in which we may live, we are of a different culture.

We speak the language of heaven, a language of service and of love. The language of heaven empowers us to look not only to our own interests, but also to the interests of others (Philippians 2:4). God’s heavenly kingdom is expressed in a language which is foreign to earthly languages and cultures of self-interest, me-first and “do unto your neighbor before they do it unto you.”

As Christian resident aliens, citizens of heaven, we experience peace in God’s presence. We follow Jesus as peacemakers in a violent world, a world of greed, lust and materialism.

As citizens of God’s kingdom we believe in giving to those in need, giving so that the cause of Christ may be better known, and we do so in the midst of a world founded on get. We believe in proclaiming his gospel of grace to a world based on personal gain at the expense of others, a world in wild pursuit of personal gratification and material wealth.

As citizens of heaven, we have but one Lord and one Savior. If Jesus can’t be Lord of all, everything in our lives, then he can’t be Lord at all. We worship him and him alone. Faith alone, grace alone, and Christ alone.

This means that we don’t see our faith as a compartment of our lives, it isn’t something we do only on a Sunday morning. Our faith, our citizenship, is something we are at all times—at work, at play, at prayer, with friends and family.

Sometimes our Christian values are in conflict with those of our city, our state, our province and our nation. Sometimes there are difficult choices we as Christians must make.

As you live out your life here on earth, as you live in this physical here-and-now world as a resident alien, remember your primary citizenship is in heaven.

Give thanks for the physical blessings and freedoms you enjoy. As Paul said to Timothy, pray for kings and all those in authority (1 Timothy 2:2). Respect those who rule in high political and civil offices.

If you vote, vote as a Christ-follower.  If you don’t vote, don’t consider yourself spiritually superior to those who do.

Treasure your freedom to vote, and your right to think for yourself. Avoid those who would manipulate you (even from pulpits). Think for yourself. Give others, even and especially within the body of Christ, respect as a fellow child of God when they differ with you.

Jesus is our Savior, not any political party. As Christians we have but one Lord, and his name is Jesus.