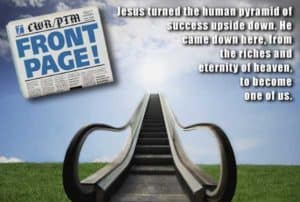 They were on their way up to Jerusalem, with Jesus leading the way, and the disciples were astonished, while those who followed were afraid. Again he took the twelve aside and told them what was going to happen to him. “We are going up to Jerusalem,” he said, “and the Son of Man will be delivered over to the chief priests and the teachers of the law. They will condemn him to death and will hand him over to the Gentiles, who will mock him and spit on him, flog him and kill him. Three days later he will rise.” Then James and John, the sons of Zebedee, came to him. “Teacher,” they said, “we want you to do for us whatever we ask.” “What do you want me to do for you?” he asked. They replied, “Let one of us sit at your right and the other at your left in your glory.” “You don’t know what you are asking,” Jesus said. “Can you drink the cup I drink or be baptized with the baptism I am baptized with?” “We can,” they answered.  Jesus said to them, “You will drink the cup I drink and be baptized with the baptism I am baptized with, but to sit at my right or left is not for me to grant. These places belong to those for whom they have been prepared.” When the ten heard about this, they became indignant with James and John. Jesus called them together and said, “You know that those who are regarded as rulers of the Gentiles lord it over them, and their high officials exercise authority over them. Not so with you. Instead, whoever wants to become great among you must be your servant, and whoever wants to be first must be slave of all. For even the Son of Man did not come to be served, but to serve, and to give his life as a ransom for many.”—Mark 10:32-45

Was Jesus amused or saddened by James’ and John’s blatant, unabashed request? We don’t know. It seems that James and John were so blinded by their desire to lord it over others, to be big wheels and be in charge, that they assured Jesus that they would be willing to drink his cup and be baptized with his baptism! They must not have been listening, because just before their power-grabbing request, Jesus took the twelve disciples aside and reminded them that he was going to be condemned to death, mocked, spit on, flogged and killed (Mark 10:33-34).

The Gospel of Matthew also tells this story, adding another element (Matthew 20:17-28). Matthew indicates it was the mother of James and John who asked for the most powerful places of honor to be given to her sons (Matthew 20:20-21).

Whether it was their mother, or James and John—or both—who made this obviously transparent, self-seeking request, the other ten disciples were not happy campers when they heard about it. We assume that the other ten disciples were not only upset with James and John because they asked for the chief positions in the kingdom of heaven—but, in addition, because they (the other ten) didn’t think to ask for the same positions for themselves!

The ten disciples were indignant about James’ and John’s request (Mark 10:41). Jesus, as he so often did, used the passion of the moment as a teaching opportunity. Jesus drew a contrast between his kingdom of heaven and the kingdoms of this world. He said that the rulers and high officials of the kingdoms of this world exercise their authority to lord it over others.

Authoritarian governing has a long and ugly record in the annals of history. More often than not rulers and kings have laid heavy burdens on people. There are many such examples in our world today—North Korea, Zimbabwe and Iran immediately come to mind. In the realm of religion, there are also many examples of hierarchies and authoritarian, top-down, do-as-we-say-or-else pastors and priests.

Jesus follows his description of abusive authoritarianism, which functions as a way to serve those who are at the top (at the expense of those at the bottom) with this declaration to his disciples: “…Not so with you” (Mark 10:43).

Jesus tells his disciples, in no uncertain terms, if you think that my kingdom is going to replicate the power-hungry, authoritarian, serve-the-big-shots-first-and-foremost kind of authority this world often sees, then think again. “Not so with you.” Jesus tells his disciples that if they choose to be ministers in his kingdom then they will choose love over power.

If we want to follow Jesus, serving others in his name, then our lives will be exemplified by sacrificial love as he demonstrated on his cross rather than the crass control mechanisms of authoritarianism, whereby Christ-less religion and its leadership always gets served first, many times at the expense of those it pretends to serve. If we follow Jesus, the primary goal and objective of our life is not to move up the ladder of human importance.

Some call the fabled path from rags to riches the ladder of success. The ladder of success, we are told, can be climbed by anyone who is willing to work. Improving yourself, either physically or spiritually, has also been called “pulling yourself up by your own bootstraps.” As it is preached and taught within Christ-less religion, “pulling yourself up by your own bootstraps” is somewhat like climbing the stairway to heaven. Christ-less religion and its authorities assure its countless millions of followers that if they are determined and work hard enough then one day their efforts will take them to the top of the stairway to heaven. Some preachers are so brazen that they actually tell their followers that God wants them to be rich. Of course, they say, the path to riches starts with sending the preacher money. It’s called the Prosperity Gospel.

Such self-help, self-centered motivation is the diametric opposite of authentic Christianity. Our passage in the tenth chapter of Mark records Jesus as offering another, conflicting core value—an opposing lifestyle to the human desire to “make it to the top.”

Jesus turned the human pyramid of success upside down. He came down here, from the riches and eternity of heaven, to become one of us. As the last verse of our passage in Mark says, “For even the Son of Man did not come to be served, but to serve, and to give his life as a ransom for many” (Mark 10:45). Rather than being an example of upward mobility, of rags-to-riches, Jesus was just the opposite. Jesus was, out of his love for all mankind, an example of downward mobility—of riches-to-rags.

Instead of climbing the ladder to the top, instead of spending his life trying to ascend to the greatness most valued by humans, by getting to the top of the pyramid—Jesus descended from the riches and eternity of heaven, coming to serve rather than to be served. The best things in life are not achieved by pushing, grabbing and stepping over the bodies of others on the way to the top. The things that are eternally significant are not realized by doing unto others before they do it to you.

If Jesus had wanted us to know how he was the richest and most famous of all, if he had been primarily interested in his own upward mobility, he would never had descended to this hell-hole cesspool of corruption and sin we call planet earth. If he was merely interested in feathering his own nest, why waste his time on pathetic sinners like you and me? After all, if he came as Jesus, God in the flesh, he might be mistaken as a sinner—like you and me. If Jesus was only interested in what other people thought of him, then he would have been mortified that he, the Creator of the universe, would be called a bastard, given the circumstances he chose, being born of a young, unwed mother.

But Jesus chose another path. He chose to be downwardly mobile. He chose to serve rather than be served. He chose to use his authority—the ultimate authority in this universe—to help us realize that his kingdom is not about serving ourselves, but about serving others. Jesus absolutely opposed authoritarianism—the use of hierarchical, top-down, lord-it-over-others leadership for the purpose of becoming big wheels and top dogs. Jesus did not use his authority for selfish purposes. Because of his love for you and me,

Jesus stepped down from his position in heaven, to put himself at the disposal of the human beings he had created.

You may have heard the story of man named George. Just after George died, he arrived at the Pearly Gates. St. Peter told him that he was going to take him on a tour of heaven and of hell. The first stop was heaven. St. Peter and George arrived just in time for dinner—it was in a huge banquet hall, the tables were sagging with the weight of the sumptuous entrees. Everyone was talking, laughing and having a wonderful time. They all looked well-fed and happy. George also noticed that each one of them held a long fork —about four feet long. It was the longest fork George had ever seen.

Then Peter and George took off to hell. It was still dinnertime when they arrived. The dining hall in hell looked just like the banquet hall in heaven. Just like in heaven, the tables were sagging from the weight of all the food. But there was no conversation taking place—everyone looked angry and resentful—they also looked like they were starving, in spite of the fact that plenty of food was right in front of them. And George noticed that everyone in hell was also holding a four-foot-long fork.

St. Peter said, “In hell, there’s no spirit of giving or of service. In hell everyone looks out for themselves. The people in hell’s dining room only think about themselves. But, the forks are four feet long—when they pick up the food with their forks they can’t reach their own mouths. So they go hungry.”

“In heaven, everyone wants to serve others. When someone is hungry, all they have to do is ask the person on the other side of the table to use his or her fork to pick up some food and feed them. Sometimes people don’t even have to ask. They have the same four-foot-long forks, which are far too long to feed themselves, but in heaven, they feed each other. In hell, they are so engrossed in looking out for number one that no one even thinks of serving someone else.”