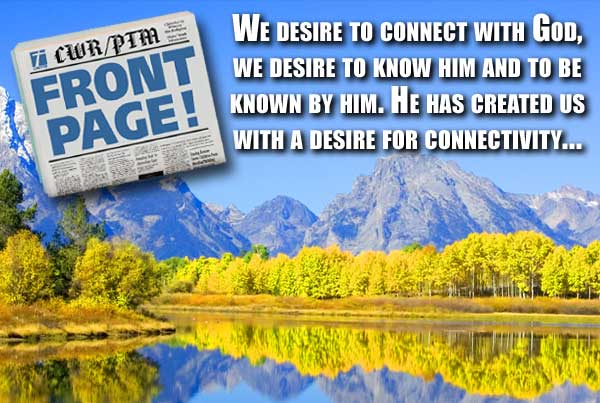 Then I saw a new heaven and a new earth, for the first heaven and the first earth had passed away, and there was no longer any sea. I saw the Holy City, the new Jerusalem, coming down out of heaven from God, prepared as a bride beautifully dressed for her husband. And I heard a loud voice from the throne saying, “Now the dwelling of God is with men, and he will live with them. They will be his people, and God himself will be with them and be their God. He will wipe every tear from their eyes. There will be no more death or mourning or crying or pain, for the old order of things has passed away.”—Revelation 21:1-4

Does God love you? Most people would say, “Of course he does. The Bible says so, and I believe the Bible.”
But, does God like you? That question causes many people to pause for a second or two, or longer. Think about that. Sure, he might love you, but does he like you? I believe he does. I believe God Really Likes You.

Revelation 21:1-4 is the introduction to the spectacular vision given to the Apostle John by Jesus, recorded for us in the rest of the 21st chapter of Revelation. John saw a magnificent city whose streets were paved with gold, gold so pure that it looked like transparent glass. This New Jerusalem featured twelve gates, each of which was a single, giant pearl.

The gates of the New Jerusalem are always open, never closed. There is no darkness of any kind in New Jerusalem, not even night. There is only light, light eternally produced by the glory of God’s presence. Nothing impure, nothing shameful, nothing deceitful can enter into New Jerusalem.

The vision John was given doesn’t specifically mention shopping malls, Starbucks or fast food franchises as a part of New Jerusalem. We can safely assume, of course, that such enterprises will not be needed.

Yet, something we might assume would be a fixture in New Jerusalem is not there at all. No religious establishments. No churches. John says in vs. 22, recording the vision Jesus gave him, I did not see a temple in the city, because the Lord God Almighty and the Lamb are its temple. So that’s what heaven is like—a place where religion is on the outside looking in!

The New Jerusalem is depicted in this vision using the most lavish grandeur possible, gates of huge pearls and streets of gold to underline the consistent, contrasting message of Revelation.

Revelation contrasts the city of God with the city of man. Revelation not only talks about the heavenly city, but earthly Babylon. The Babylon of the book of Revelation embodies earthly attempts to impress God and gain his favor, as well as religious institutions that control and oppress their followers in the name of God.

In another graphic depiction, Revelation pictures the best that humans can produce, not simply materially, but spiritually, as an old, corrupt whore. Revelation depicts all human enterprise, by whatever name or title, as a corrupt person who has seduced others in an attempt to gain their money and their allegiance and thereby control them.

Throughout the book of Revelation, and throughout the gospel of Jesus Christ, we are presented with two options—two relationships. Spiritually and physically, Babylon represents the best that humans can produce, the closest and most intimate relationships that a human can offer. The best relationship religion offers is one in which you must perform, you must work and work and work, and give and give and give and give—in an endless, vain attempt to make the gods of religion like you. In its most graphic depiction here in the book of Revelation, this religious relationship is summarized by a physical metaphor of two humans frantically attempting to use each other, to feel good at the expense of another.

Christ-less religion may allow you to be gratified and feel good, but religion, is, by its very nature, unable to provide lasting satisfaction. Christ-less religion is an exercise that must be endlessly repeated, often in ever increasing doses, in a vain attempt to experience a “god-fix”—an artificial spiritual high.

On the other hand we are presented another option, the personal, intimate relationship with our loving God whereby he loves us on the basis of his love, not on the basis of how well we are able to please him and make him feel good.

Our loving God, who really likes you and me, offers us his love, not on the basis of what we can do for him, but what he can and will do for us. He offers us “in-spite-of” love, not “because-of” love. He offers us a love that cannot be changed by our positive or negative efforts, in spite of our successes or failures, a love that is always there for us.

So, on the one hand, the book of Revelation pictures a sad, pathetic figure—an old, disease-ridden individual who has sold herself to the highest bidder and purchased for herself the most expensive and alluring clothing possible. This person who has used every trick imaginable to bamboozle those she has seduced and purchased, is a pitiful symbol of the devices and workings of that “old-time religion.”

She dresses herself, according to chapter 17, in purple and scarlet, while holding in her hand the spiritual addictions she uses to deceive and seduce her followers. The cup she offers is filled with the endless rituals, ceremonies, pills and prescriptions of religion, and this cup is described by Revelation as filth and abomination.

That’s what the book of Revelation says about religion, friends. Filth and abomination.

On the other hand we have the bride of Christ. The bride of Christ is a beautiful bride who is given her white wedding dress by Jesus Christ. Jesus purchases the dress of his bride with his own blood, the blood of the Lamb. This is a bride who cannot be beautiful on her own merits, but a bride who has been made beautiful by God’s grace. As verse two of our passage says, …the Holy City, the new Jerusalem, coming down out of heaven from God, prepared as a bride beautifully dressed for her husband. The bride of Christ is not pictured as a been-through-the-wringer, corrupt, depraved, deceitful hustler who sells herself to the highest bidder, but as a symbol of pure, pristine and perfect love.

Of course, this bride is not pure as a result of her efforts. The bride of Christ is not naturally pure. She has been purified, cleansed and transformed. Her beauty is indeed God-given.

New Jerusalem is described as unbelievably opulent so that the earthly attractiveness of Babylon and its enticements can be unmasked for what they are—cheap and tawdry.

The reality of New Jerusalem, the place where God dwells, is reinforced by the fact that the New Jerusalem comes down from heaven to earth. Heaven comes to earth, and in the process earth becomes heaven. Heaven swallows up the filth, corruption, evil, and degradation of humanity and turns it into New Jerusalem. John is describing the complete transformation of all things, the complete transformation of all our human reality and culture.

Jesus reveals this new reality to John as a picture of a pure and pristine bride, and as a holy, untarnished city. This combination of a bride and city describes God’s intimate relationship with us, his people, his bride; as well as his social communion and interaction with us, his city, the New Jerusalem.

He dwells with the bride as one, in the heavenly picture of marriage. He dwells in the city, in divine civilization, in this celestial picture of culture and society. This revelation of new reality is not a revised edition of the same old thing. The New Jerusalem is not a remodeled old Jerusalem. The New Jerusalem is something absolutely different, with a new dimension, a new reality.

One of the things that makes this vision so attractive for me is that the big business of institutionalized, Christ-less religion will eventually be put out of business. There is no room for any legalistic religion in the New Jerusalem.
In verse four of our keynote passage (Revelation 21:4) God’s intimacy, compassion, concern and love is described. God will 1) wipe away every tear. There will be 2) no more death, 3) no more mourning, 4) no more crying nor 5) any more pain.

As the last words of verse four explain; the old order of things has passed away. In these five steps God demonstrates his absolute love, the fact that his love is not just a warm feeling, but he is extremely fond of us, he really likes us!

Our world today has become increasingly depersonalized. We are all painfully aware that many business phones are not answered by “real live” people, but by computerized menus that advise us to punch buttons on our phone or respond with clear, distinct answers to questions posed by an impersonal, computerized voice.

We’re given a list of buttons to push, and there are times when we sit or stand there, having descended into the sixth level of voice-mail hell, being reassured by a disembodied, computer-generated voice, in intervals of 30 or 60 seconds, “your call is important to us.”

It’s not just voice mail—in this computer age you can go through the day without ever getting up close and personal with a “real live” human being. You can watch television, listen to the radio, follow the news and pay your bills on your computer. Cell phones not only enable you to call others but receive calls, text message others, send email messages, listen to music, as well as a host of other functions.

Have you ever wondered why some television shows are so appealing—you know, the ones that depict people walking into a diner, a bar, a pub, a small shop, or a Starbucks—places where people know each other by name?

We all have a yearning to be connected. We desire to have a place where we can know and be known. And this kind of desire for communion is not simply a desire on a physical level, but it goes much deeper. We desire to connect with God, we desire to know him and to be known by him. He has created us with a desire for connectivity, wanting to plug into him, if you like. He has created us that way because he really likes us. His love is personal and intimate, not detached, stilted and distant. His love is passionate and powerful, more so than we can ever begin to imagine.

Authentic Christianity is a relationship. It’s not a matter of doing one thing to enable something else to happen. Christianity is all about Jesus Christ. Without Jesus there is no Christianity. That’s why we must trust in and accept Jesus in order to be a Christian. God opens his heavenly arms to us on the basis of the goodness and perfection of Jesus.

Our relationship with God, our communion with him, our oneness with and in him, does not depend on our performance, it doesn’t depend on who we are and what we have done, it is based on who Jesus is and what he has done, is doing, and will do.

I remember one person taking stock of her life and saying, “You know, when I seriously considered the god that I had been taught about by my religious teachers, I had to realize that there was scarcely a single thought, action, behavior or decision I had made that god really liked. The god I knew had to be sick and tired of me.”