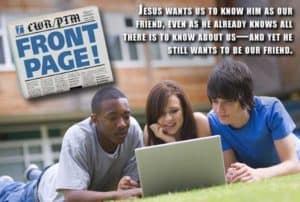 What a friend we have in Jesus! So goes that great old hymn—and its message is the gospel truth.
In John 15:9-17 Jesus encourages us to remain in him and with him. In the Authorized King James Version the word used is “abide.” Jesus is requesting that we stay with him.

He’s saying, “Don’t move away. Don’t wander away. Stay with me. Remain with me.”

Jesus is saying, “Keep your eyes and focus on me. Don’t ever stop looking to me as the absolute center of your faith. Don’t allow religious ceremonies and rituals to confuse you—so that you think our relationship (your friendship with me) depends on you.”

This passage is a part of a longer discussion Jesus is having with his students—his disciples—on the eve of his death.

In its ten-year run, from 1994 to 2004, the show “Friends” became one of the most popular sitcoms (situation comedies) in television history.

“Friends” revolved around the relationships of a group of three men and three women—all young adults, living in New York.

Less than a decade later, social networking Internet services—such as My Space, LinkedIn, Friendster and probably most successful of all, Facebook (the recent movie “Social Network” was based on the development of Facebook) —revolutionized the way many people make friends.

Today millions of people all around the world attempt to make “electronic” friends. But are most of these electronic friends real friends you can count on—or are they just “fair weather” friends?

We humans hunger for friendship. We want friends who will love us for who we are, in spite of our imperfections.

We want good friends who are, as the saying goes, “there for us.” (In fact, the theme song of the TV sitcom “Friends” was titled “I’ll Be There For You.”)

Jesus is a real, eternal, I’m-never-going-to-stop-being-your-friend kind of friend. Jesus is not simply an electronic-fair-weather-friend who occasionally sends us electronic messages.

Jesus is not an electronic friend in cyberspace—in fact, if you have accepted him and trusted him on the basis of God’s grace and love, Jesus lives in and through you.

You can’t get much closer than that!

Speaking of God’s grace and love, it’s interesting to note that the word “love” is used nine times in the nine verses of our passage in John 15:9-17.

Jesus wants us to know him as our friend, even as he already knows all there is to know about us—and yet he still wants to be our friend.

Because of Jesus you don’t have to think of God as an impersonal, detached and distanced God who has no idea about what your life is really like.

Because of Jesus you don’t have to think of God as a grumpy old grouch who is just waiting for any excuse he can find to pounce on you and punish you.

Because of Jesus, God is your friend!