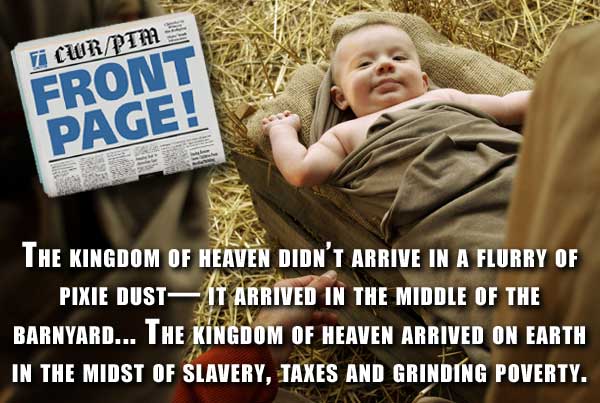 Hope deferred makes the heart sick, but a longing fulfilled is a tree of life.
—Proverbs 13:12

People often give up on God because they feel he didn’t fulfill their expectations. And where, exactly, do people receive their education about what they can expect from God? If you answered “religious institutions” you get to pass “Go”— collect $200 and receive a “get out of religion free” card.

One of the major sources of discontent with God is that many people do what they think God wants them to do because they expect him to make them feel good (“bless” is often used instead of “feel good”). And of course we all want to be blessed. Indeed, in many ways, often unrecognized by us, we are blessed. It’s just that, being human, we all would like to be more blessed. But a cursory reading of the New Testament reveals that physical entitlement programs are not part of the kingdom of heaven. So having the hope of feeling good, and being physically blessed in ways we would like and expect is unrealistic and, for that matter, unbiblical.

The gospel of Jesus Christ is not all about an escape from the real world. We can see that from the very beginning, by considering the real Christmas story. When God came to this world, in the person of Jesus, he came to a world that was filled with backstabbing, partisan politics. The powerful and the elite of that day were just as self-interested as many are today. The time when Jesus was born was filled with violence, bitterness, pride and hatred. The real world in which Jesus was born is not, of course, normally described on Christmas cards.

The kingdom of heaven didn’t arrive in a flurry of pixie dust—it arrived in the middle of the barnyard. The kingdom of heaven is not a dazzling Disneyland dream-world where God makes all of our earthly pipe-dreams come true. The real world of following Jesus is not an endless odyssey of visiting Fantasyland, wearing silly hats and eating cotton candy.

The kingdom of heaven arrived on earth in the midst of slavery, taxes and grinding poverty. We are given no guarantees or hope that such human misery will be eradicated from this world until the new heavens and the new earth.
The hope that we have, given to us by the kingdom of heaven, is that God himself, in the person of Jesus, has come into this world to personally experience all of the problems we encounter. Our hope is in him.

Hopeless Politics
Are you tired of politics? Are you burned out—has the hope you once placed in a political leader who promised you the moon fizzled, leaving your heart sick? Join the crowd. Get in line. It’s a long line—stretching from the present way back into the past. Let’s go way back—to one of the politicians into whose constituency Jesus was born.

He was named Herod. Some called him Herod the Great (apparently he rather favored the title himself). Herod had a huge ego and a hot temper. He murdered almost anyone who got in the way of his political ambitions—including one of his wives and two of his sons.

The Gospel of Matthew tells us that Herod was greatly disturbed to hear that the king of the Jews—the Messiah—was going to be born. He didn’t know exactly where this child would be born, or to whom. So Herod, who was paranoid that someone might take his throne, decided to kill all the boy babies in Bethlehem who were two years old and younger. Just to make sure.

Tired of the corruption inside the beltway in Washington, DC? Sick to death of the fat cats who sit and sit and sit in your state capitol? For all of our political corruption, if Herod were in office here in North America, this guy would either be re-called or certainly fail to be re-elected. Herod was “meaner than a junk-yard dog.”

In Luke 2:1-2, we read that Jesus was born when the Roman emperor Augustus decided to take a census of the kingdom of Rome. A census involved taxation, and this kind of an event further inflamed the wretched conditions of the Jews who lived under the military occupation of Rome. Apparently Augustus had an answer for his deficit problem. Just raise taxes. Have you ever heard that solution? Augustus was in no mood to cut back spending, any more than most of our politicians today.

Of course we live in uncertain times. Will the economy rebound? Will North Korea and Iran somehow be deterred from using the frightening weapons they have worked so hard to obtain? What will happen in the Middle East—in Afghanistan, in Iraq and in Pakistan?

Will the horrible regimes of cruel and savage dictators, who starve their own people in places like North Korea, soon be over?

According to a recent estimate, there are between 50,000 to 70,000 Christians being detained in inhumane prison camps in North Korea—a country in which a Christian can be imprisoned for, among other reasons, simply being a Christian or for failing to have a picture of the state leader in their home.

Born Into Desperate Times
Setting aside the obvious and the necessary—that Jesus was born over 2,000 years ago, and that the place and time to which he came was governed by prophecy—let’s consider a hypothetical. If the first coming of Jesus did not happen when it did—if God had instead selected our day and age for the time when Jesus would be born, where on earth would Jesus arrive?

Given the emphasis of his ministry, we can suspect that it wouldn’t be in a quiet, leafy suburb in North America, Europe, Australia or New Zealand. Given the kind of world into which he was born, we could imagine that the geographical location to which he would come today would be somewhat like the dry and barren landscape and desperate conditions experienced in a place like Afghanistan. For that matter, Bethlehem today would still rank high on the list of potential birthplaces.

As bad as it might be in your country, state, province, city or town, chances are, if you are reading this, if he followed the pattern of the culture into which he was born, were he to come today Jesus would not be born next door to your house or mine. We’re not living in the kind of physical oppression, hopelessness and poverty to which he came. This is not to say that poverty and emptiness do not exist in North America. They do—but not on the scale of other places.

Jesus Is Hope!
Christ-centered hope is no ordinary, here-today-and-gone-tomorrow kind of hope. Human hope is based on uncertainty.

At the very best, human hope is transitory, depending on the life of a virtuous beneficiary. Human hope is a wish—a dream. But divine hope in and through Jesus Christ, given as a gift of God, is absolutely certain. There is no wish or dream about it.

We find the kingdom of heaven in faith alone, grace alone and Christ alone. So be assured, whatever problem may drag you down—whatever difficulty may oppress and depress you—God’s grace, in the person of Jesus, is here for you, yesterday, today and forever (Hebrews 13:8).