How Far Will God Go? 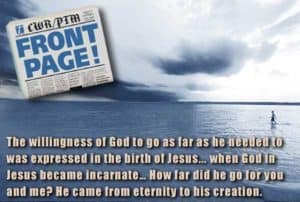 Therefore if you have any encouragement from being united with Christ, if any comfort from his love, if any common sharing in the Spirit, if any tenderness and compassion, then make my joy complete by being like-minded, having the same love, being one in spirit and of one mind. Do nothing out of selfish ambition or vain conceit. Rather, in humility value others above yourselves, not looking to your own interests but each of you to the interests of the others. In your relationships with one another, have the same mindset as Christ Jesus: Who, being in very nature God, did not consider equality with God something to be used to his own advantage; rather, he made himself nothing by taking the very nature of a servant, being made in human likeness. And being found in appearance as a man, he humbled himself by becoming obedient to death—even death on a cross!—Philippians 2:1-8

What a beautiful and profound expression of God’s love! There seem to be many layers and many degrees of God’s grace expressed here. For that reason, I keep coming back to this second chapter of Philippians and studying it again and again—it continually yields fresh and deeper appreciation of the nature of God.

Boundaries are one of the defining characteristics of what it means to be human. As children, we probe and push until we can discover just how far our parents will go before they lower the boom on us. When we marry, we normally do a similar thing with the person we have promised to love and protect and cherish.

When the speed limit is 65, most drivers will extend that to about 75, thinking they have a safe margin before the highway patrol will stop them. We spend a lot of time and effort trying to go as far as we can. Lending institutions thrive by allowing people to push the outer limits of their finances. But even institutions that make money by virtually enslaving people will only allow a certain degree of indebtedness and then the credit runs out.

Is it possible to take advantage of God’s good graces? Will God allow us to take advantage of him? Surely he isn’t the eternal equivalent of a kind, indulgent grandparent who sits on his heavenly throne watching us lie, cheat and steal without coming to a point when he has finally had enough. Is there a point to which we can come when God, like a credit card company, calls or writes us, saying, in effect, “You have now exceeded my compassion. You have too many sins on your heavenly credit card—you have reached the point of no return.”

One picture of God that is painted for us is of a wrathful, vengeful God, who is intent on inflicting pain and judgment on us because of our sins. We have been told that our sins have offended God and his honor, and that because his good name needed to be vindicated Jesus had to die in our place.

The traditional way in which the cross of Christ has been understood is that God was/is outraged with our sins, but because Jesus was willing to take our place, God took out his wrath and anger on his Son, instead of us. It’s called the penal substitutionary theory of why Jesus died on his cross.

But then we see, in so many places in the Bible, in the Old and New Testaments, a conflicting picture of God—a God who cares, who is compassionate, who will seemingly stop at nothing to win our affections and demonstrate his love. That’s another view of the cross of Christ—the ultimate demonstration of God’s love. The cross of Christ shows us how far God, in Jesus, went, and how far he will always go for you and me.

The two pictures of God are not reconcilable—God does not have a split personality. He is one or the other. How can we know who God really is? In John 14:9 Jesus said that anyone who had seen him has seen the Father. Stated from another perspective, we can say that unless we fully comprehend, accept and embrace Jesus, we cannot fully know and experience the Father. So let’s think about the cross of Christ and how far God, in Jesus, went to demonstrate his love to us.

Has anyone ever taken advantage of you? Of course they have—it’s part of being human. It’s easier to remember the times we have been victimized than the difficult and painful process of remembering those of whom we have taken advantage.

We naturally take advantage of others. It’s a jungle out there—Darwin called it the “survival of the fittest.” We are naturally self-centered—we look out for number one. We will stop at nothing to get our own way. We will walk over and around the dying and dead bodies of others—we will gossip, slander and lie about others so that we can put them down so that we may be exalted. We take advantage of our fellow human beings.

But Jesus reversed normal human actions and reactions by teaching what we call the Golden Rule (Matthew 7:12) and exemplifying that teaching in his life. When Jesus came to us, to live among us as one of us, without participating in our sins, Jesus knew ahead of time exactly what was in store. He knew what to expect from us because he created us. He knew that, as John 1: 10 says, though he was the Creator of the universe and all life, that when he became one of us the world at large would not recognize him, his love, his grace and his service. He knew that, as John 1:11 says, he would come to his own, yet his own would not receive him.

He knew that he would be rejected, misunderstood, despised and ultimately killed in the most painful, degrading and shameful way humans could devise at that time— but he came to us anyway. That’s how far he went to demonstrate his love.

If you knew that you would be tortured and beaten and killed if you showed up at a particular place at a particular time, you wouldn’t go, would you? I wouldn’t either. But God, in Christ, did just that. He knew exactly what would happen to him and how he would be treated here on this earth, but he came anyway. That’s how far he went to demonstrate his love.

All through his life on earth Jesus made himself vulnerable to cheating, lying, self-centered, lust-driven, vain and greedy people who would stop at nothing to get their own way. And before we go too far down the road of condemnation, let’s realize “those’ people were driven by the same human nature we are. To this very day, Jesus is still willing to put up with us, still willing to have us take advantage of him, because he knows that any relationship with a human, on the part of God, means that humans will be exactly who we are—ugly and reprehensible sinners, by contrast with the purity and perfection of God.

That distance and time is far greater than any distance or time we can measure because eternity is not measured. And what did he come to? A manger—a feeding trough—in a barn. To whom was he born? A teenager who had become pregnant before she was married. Who were the first visitors to see him? Lowly and despised shepherds, as opposed to high and mighty kings or religious authorities.

He started his earthly life as a vulnerable, dependent baby. He cried for food, for nurture and for love. He was completely dependent on human care—to change him, to care for him and to respond to his cries. That’s how far he went—that’s how far he will always go—for you and me.

God goes as far as is necessary, because of his humility and vulnerability. I thought of the vulnerability of God when I recently watched a movie called The Edge. The Edge is set in Alaska, with spectacular scenes of the wilderness. Anthony Hopkins, who is one of my favorite living actors, plays a wise, compassionate wealthy older man named Charles Morse. His much younger, beautiful wife, Mickey Morse, is played by Elle MacPherson. Alec Baldwin is Robert Green, a photographer.

Charles, Bob and one of Bob’s photographic assistants decide to take a plane to an even more remote location than where they are all staying—and the plane crashes into a lake. The assistant is killed by a bear, leaving Charles and Bob, who begin an adventure trying to escape the bear while also trying to find their way back to the outpost where they were staying.

Because Charles is already suspicious of Bob, now he thinks that Bob may use their predicament to kill him and thus be able to continue his affair with Mickey, Charles’ wife.

The movie was shot on location, apparently at great cost, and it features one of the most adrenalin-pumping battles with a huge grizzly bear I have ever seen in any movie. But the real story in this movie, for me, was Charles. Charles is generous, kind and wise—to both his wife Mickey, and Bob, with whom she is having an affair. Charles seems to allow them to assume that he is naïve—he allows them to assume they are taking advantage of his good graces.

Even when Bob is seriously injured in an attempt to kill Charles, and even though Charles discovers that his wife Mickey also gave Bob a watch, with an endearing inscription about all the nights they spent together, as they try to find a way out of the wilderness Charles attempts to nurse Bob back to health.

Of course, no human depiction in any movie or story or book can ever do justice to the lengths to which God makes himself vulnerable to us, and how far he is willing to go to put up with all of our ugliness because he is so absolutely in love with us. But as I watched the character named Charles in The Edge, I couldn’t help but think of God’s willingness to put up with all of our ugliness. For me Charles was an imperfect example of God’s willingness to let us take advantage of his good graces without retaliating in kind—his absolute generosity and kindness toward us, for no apparent reason!

We are supremely unlovable, with no redeeming qualities that would endear us to God—yet God loves us anyway, and will never stop doing so. God is willing to be judged as naïve and foolish by religion at large—he offers us his grace with no strings attached—knowing beforehand that we will take advantage of his good graces.

Vulnerability is a cornerstone of our relationship with God. We can trust him implicitly because of his complete vulnerability to us—we know him because of the love he has demonstrated and will always demonstrate to us. And we’re able to love him because, as 1 John 4:19 says, We love because he first loved us.

God will make himself vulnerable to our self-centered lusts and greed—to our lying and cheating and dishonesty. He will allow us to reject him and betray him and abandon him but he will never, ever abandon us.

Jesus, God in the flesh, became so vulnerable to us that he allowed us to kill him. Yet, in spite of our track record, God is not a pain-inflicting God who is angry and upset with us, insisting that his honor be redeemed. He will climb the highest mountain and dive into the deepest sea to find us. He will never, ever give up on us. He will always keep coming after us. That’s How Far God Will Go.