The King Who Became a Man 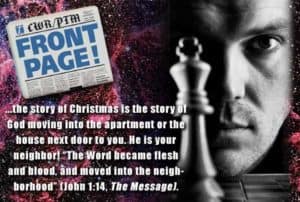 The Word became flesh and blood, and moved into the neighborhood (John 1:14, The Message).

During his reign (1910-1936) King George V of the United Kingdom and the British Empire visited Leeds, a city in the north of England. When he was informed that a school was situated next to the railway line, King George agreed to have the train slow down so that he could appear on a platform and wave to the children as the royal entourage passed.

When the king came outside the train he wore no outward signs of royalty, but was dressed in a suit, like any other male subject of his kingdom. After the train glided by and the cheers of the children faded, one little girl remained next to the fence by the railroad tracks, sobbing. A teacher came over to console her, and asked the girl why she was crying. “I wanted to see the king, but I only saw a man!”

Because he did not come with pomp and ceremony—because he didn’t wear the regalia befitting a king—when the Creator of the entire universe, the King of kings and Lord of lords, came into our world in the person of Jesus, many saw only a man who looked and dressed like everyone else.

Do you remember the old fairy tale where a beautiful princess kissed a frog and the frog was transformed into a handsome prince? When God came to be one of us, in the person of Jesus, the fairy tale reversed itself. God, demonstrating his love for all mankind, “kissed us” and promptly became a “frog” like us.
• God involved himself in our lives by becoming one of us—he demonstrated that he was not immune from the life experienced by his creation.
• Christmas is the announcement of the time when God inhabited our world—”The Word became flesh and blood, and moved into the neighborhood” (John 1:14, The Message).
• Christmas proclaims the grace of our Lord Jesus Christ, when God identified with us, in the miracle we often refer to as the incarnation. “For you know the grace of our Lord Jesus Christ, that though he was rich, yet for your sakes he became poor, so that you through his poverty might become rich” (2 Corinthians 8:9).

Christmas is not merely a footnote in a dusty old history book, but a living reality, because the risen Jesus Christ is alive! As he did in his earthly life, so too does he continue, in our lives right now, to demonstrate his love for us by getting involved in the nuts and bolts of our lives. Christmas is the announcement that the Captain of our salvation has arrived at the front lines, to be with us, in our trenches and in our foxholes.

You probably remember the story about the time when a man named Simon hosted Jesus at a dinner. During the dinner a woman of questionable character crashed the party to see Jesus. Simon viewed this woman as an uninvited guest, someone who was not entitled to be present as a guest in his home because of her lack of social status. Reading between the lines of this account (Luke 7:36-50) we presume that Simon also disdained her, thinking her to be a contemptible street person, the scum of the earth.

Jesus asked Simon, “Do you see this woman?” (Luke 7:44). The woman was all but invisible to Simon and the other polite, church-going, religious people attending the dinner. What did Jesus see when he looked at people like this woman?

“When he saw the crowds, he had compassion on them, because they were harassed and helpless, like sheep without a shepherd” (Matthew 9:36). During his earthly life Jesus saw and experienced the real struggles and heartaches faced by those to whom he ministered. He came here, as God in the flesh, to know us and demonstrate his compassion and empathy for us.

He Came to Love Us
What do we see when we consider Jesus? Let’s not allow the troubles of this world, which are overwhelming, to distract us from the love of Christ. And there are many real distractions which can take our focus off Christ—wars, terrorist threats and atrocities, and perhaps closer to our homes, unemployment, illness, disease and the ongoing difficulties we experience with family and friends.

When we see the lights of Christmas, let’s be reminded that Jesus is the light of the world (John 8:12). When and if you give a gift, remember that “God so loved the world that he GAVE his one and only son….” (John 3:16, my emphasis). Look for expressions and evidence of God’s love, instead of controversy and strife which can distract our focus from Jesus Christ.

I AM One of You
Ronald Reagan is one of my favorite U.S. presidents. Toward the end of one of his campaign speeches in 1979, a senior citizen cried out from the audience, “Mr. Reagan, everything you have said sounds fine. But what about us old folks? Have you forgotten us?” The man who was about to become the oldest president of the United States smiled down at her and said, “Forget you? Heavens, how could I forget you? I am one of you!”

“I AM One Of You” is the Christmas card God sends to each of us! When God, through an angel, informed Joseph that Mary would give birth to Jesus, he said: “The virgin will be with child and give birth to a son, and they will call him Immanuel (which means, ‘God with us.'”) (Matthew 1:23). God assures us, in his Christmas card, “How can I ever forget you? In Christ I became one of you!

When my all-time favorite president, Abraham Lincoln, was campaigning for the presidency, he received a letter from an eight-year-old girl. The young girl suggested that Lincoln should grow a beard to hide his rather homely face. Lincoln wasn’t offended—he read the letter and sent a thank-you to the girl. He told her that if his campaign travels ever took him close to her home town that he would like to personally meet her.

The father of the young girl was one of the movers and shakers in the little town, and when his daughter received a personal response from Lincoln he told the other officials in town the great news. Abraham Lincoln might come to their little town!

According to the story, Abraham Lincoln remembered his promise to the girl, and informed his staff that if his campaign train was scheduled to pass near her town he wanted to stop. It turned out that his campaign schedule included traveling through that area, so the girl (and her father and the town officials) soon heard the good news that Abraham Lincoln was going to visit their town!

When the day came, practically the whole town was waiting at the train station. Everyone was dressed up, the band was ready—everyone except, it seemed, the young girl to whom Lincoln had written.

Before the train arrived in town, it had to stop for repairs. Again, according to the story, because the train was so close to the town, Lincoln decided to walk into town, and he took the little girl’s address with him. He walked past the train station unnoticed, and walked through the deserted streets of the town until he found the girl’s house. He knocked on the door, introduced himself to the maid (who was speechless) and asked to see the young girl.

The young girl and a friend were having a pretend party, pretending to drink tea out of little tea cups. They invited Mr. Lincoln to join them and poured him a cup of pretend tea.

So there Abraham Lincoln sat, with those two eight-year-old girls, drinking pretend tea. After a while he asked the little girl if she liked his new beard, and then excused himself to walk back to the train.

He’s Never Too Busy
Remember that time when Jesus’ disciples were trying to keep Jesus away from small children, because they felt Jesus was just too busy for little children? Jesus told the disciples unless they became like children they would never enter the kingdom of heaven (Matthew 18:1-4).

Many of us have the idea that God is so busy with emergencies and high-level, far-reaching meetings and appointments that he would never have the time for us.

But the story of Christmas is the story of God moving into the apartment or the house next door to you. He is your neighbor! “The Word became flesh and blood, and moved into the neighborhood” (John 1:14, The Message).