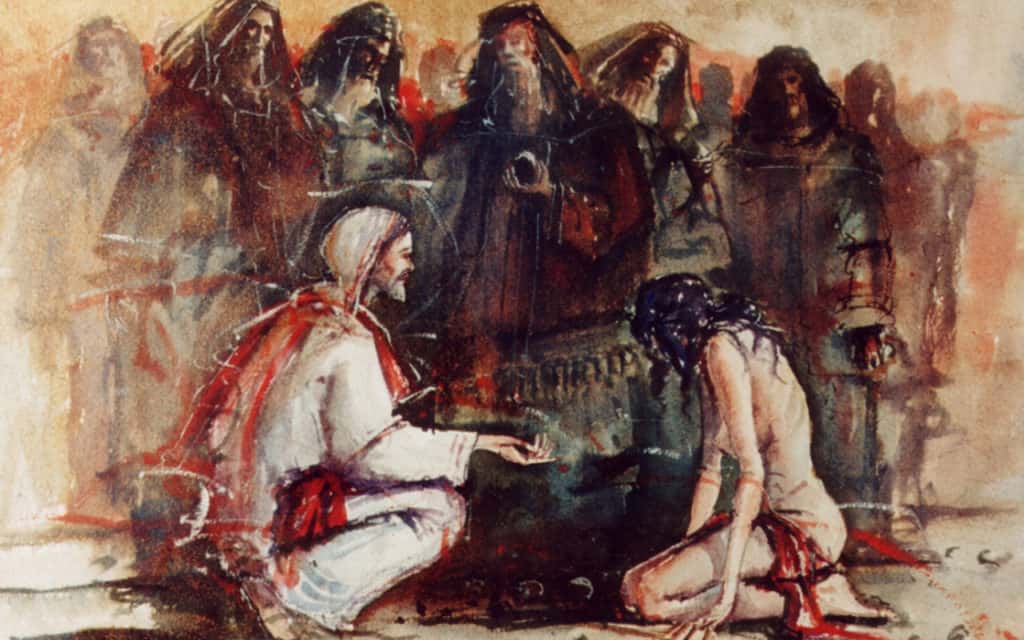 Reading John 8 through Genesis 2-3 and the Prodigal Sons

Throughout Scripture, we see “sin” identified in a variety of ways, including moral failure, law-breaking, poor spiritual hygiene, character flaws, a fatal disease and a sinister slave-driver. And where sin (hamartia) is defined as “missing the mark,” Scripture implies the mark we’re aiming at may be morality, holiness, faith and faithfulness, love of God and each other, or the glory of God. [CLICK HERE for further background on hamartia]

In my blog post, Sin? Missing what mark? I suggested another mark: our love union with God—or RE-union (reconciliation) with God. In that case, to “sin” is to turn away from God’s love. Yes, some of those other biblically-defined marks may play into that, but let’s focus on three stories:

In the Garden of Eden (Paradise), Adam and Eve walked in perfect communion with God. Theirs was the intended love-union we were all to enjoy. And then we read of their “fall.” Although the story doesn’t use the term for ‘sin,’ we read about how they turned from that union, marked by love and trust, to autonomy, self-will and as a result, shame and alienation. Their sin does not separate God from them, for he continues to pursue them, all the way out of the garden and ultimately tracks them through the Cross to retrieve them from the depths of Hades. But their sin does alienate them from God, for their new, fallen instinct is to see God as one from whom they must hide in shame. In failing to trust and obey God, and by turning from God’s face to go their own way, they missed the mark of that once-perfect love-union.

In Christ’s parable of the prodigal son(s), we find two sons in a similar peril. Like Adam and Eve, the younger son has left his father’s house to go his own way and do his own thing. He finds himself living in the poverty of alienation, slaving in the fields with a herd of swine. He has missed the mark of fellowship with his loving Father. But the father never stopped loving him and the son never ceased to be his father’s son. To be restored, he must return home and re-enter the joy of that parent-child union.

Likewise, the older son finds himself slaving in another field—the field of religious striving. While he seems to serve his father’s interests and seems to obey his father’s wishes, he has nevertheless missed the mark. How so? He has left the father’s house and made his own alleged obedience the occasion for alienation from that love-union. He regards his father as unfair, someone to resent and the elder is every bit as enslaved self-will as his younger brother.

But the Father despises neither son. He runs to the younger son while still a long way off. And without any condemnation, he assures the older brother of his place and pleads with him to return. Henri Nouwen, in his booklet, The Return of the Prodigal Son, says,

The harsh and bitter reproaches of the [elder] son are not met with words of judgment. There is no recrimination or accusation. The father does not defend himself or even comment on the elder son’s behavior. The father moves directly beyond all evaluations to stress his intimate relationship with his son when he says: “You are with me always.” The father’s declaration of unqualified love eliminates any possibility that the younger son is more loved than the elder. The elder son has never left the house. The father has shared everything with him. He has made him part of his daily life, keeping nothing from him. “All I have is yours,” he says. There could be no clearer statement of the father’s unlimited love for his elder son. Thus the father’s unreserved, unlimited love is offered wholly and equally to both sons.

This brings us to the climax of the story of the woman who was caught in the act of committing adultery. As often as I share this story, I continue to ask, “Where was the man?” Why is he not also dragged in? Is he not involved in the sin? Is he part of the set-up? We know from the text that the whole scenario was a trap for Jesus, so it certainly looks like a case of entrapment for the woman as well.

Let’s fast-forward through Jesus’ saving acts—how he stoops beside her, scribbles in the dust and one by one, all the accusers leave. We pick up on Jesus’ interaction with the woman, a conversation we only know because she would have shared it 1000 times thereafter. “The day Jesus saved me!”

“Where are your accusers?”

“Neither do I condemn you. Go and sin no more.”

Religious legalism would and has inferred, “Go and sin no more… or I will condemn you.”

But aside from such silliness, how should we take Jesus’ statement? If he doesn’t mean, “Go be sinless,” what does he mean? He must mean something!

I have normally interpreted Jesus’ words this way: “There, I’ve just completely wiped clean your record. You didn’t even repent and I forgave you. You can live as if today never happened. And you never need to go back there. I’ve given you a fresh start and a new life. What will you do with it?”

And he smiles and says, “Of course you will! Let me help you up.”

If the mark is moral perfection, unwavering trust, perfect obedience, ritual hygiene and untainted holiness, of course she would continue to sin because we all fall short of those marks. And in that sense, she would go on sinning.

But if the mark is her love-union with Christ—his embrace of unwavering love, enduring mercy and saving grace—I suspect she never left his embrace again. I could imagine her stumbling again and again but never again hiding in shame as did Adam or slaving again as did the prodigal brothers. I could imagine Jesus’ words, “Go and sin no more,” being for her not a legal demand but a creative command, similar to “Let there be light … and there was light!”  The love of Christ was a light turned on in the Father’s house and he knew she would never leave the house again. Or if somehow she found herself tripping again on her own humanity, she would forever orient herself towards God’s welcome, rather than fleeing from it back into the night.

In other words, sure she could “screw up,” but from that day on, it is entirely possible she would not “fail.” She could commit particular sins, but would never return to alienation and slavery to sin.

I cannot claim this for myself. But what the story does for me is remind me of the true mark—our union in Christ to God’s unfailing love.