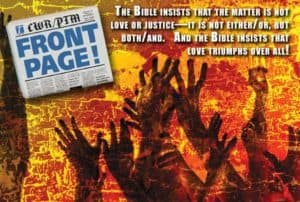 The discussion of eternal torment and the fate of the “unsaved” is often framed, by the law and order crowd, as a matter of God’s love or his justice. Those who are intent on relegating those who, to their knowledge and satisfaction, have never heard or accepted their version of Christianity to eternal torture, often characterize those, like myself, who primarily look for answers based on God’s love and grace, as soft-headed, soft-hearted and weak.

So which is it—love or justice? Is God primarily a God of love or a God of justice? Here’s what I see as the fundamental flaw in real, he-man, tough-as-nails Christianity:

• Jesus Christ is the very embodiment of God’s love—he is God’s love personified. When I study his life and teachings I am overwhelmed by his compassion and mercy, and find few examples when he models a heavenly hanging judge who makes tough, by-the-book decisions in favor of religious perceptions and definitions of justice.

• The Bible reveals that God is love. The Bible defines the very heart and core of God as love. Love is what God is, rather than one of his attributes. God has many attributes, with justice being among them. But all of God’s attributes flow out of his love—his attributes do not flow out of his justice. God is merciful, sovereign, holy, just, perfect, good, righteous, omnipotent, omnipresent and omniscient—and all of these attributes are summarized in his divine love.

• Most of the arguments attempting to place God’s justice and wrath as his defining characteristics go something like this: Yes, the death of Jesus Christ was the ultimate expression of divine love. But, it was the ultimate expression because God cannot, by his very perfection, pass over sin. To vindicate his justice God did the unthinkable—in the person of Jesus he died for us. So at the center of the cross is the glorification of God’s perfect justice.

Such ideas then lead to the insistence on an ever burning hell fire for the vast majority of humans who have ever lived, and, by comparison, an exclusive and small kingdom of heaven occupied primarily by paid-in-full, dues-paying slaves of Christ-less religion.

I absolutely reject a characterization of God as a primitive god of wrath on the grounds of the person of Jesus Christ and the fullness of his gospel. God the Father did not insist that God the Son die so that God the Father could be vindicated. In seeking a humanly satisfactory motive for the cross of Christ, this outrageous idea diminishes the love of God and perverts his very nature.

We must beware of defining God by human standards. Human ideas of retributive justice, or vengeance, often masquerade as a divine manifesto. God never said we would, in this lifetime, completely fathom his love—by his grace we are saved from theological attempts that try to do just that!

• Those who argue for eternal punishment of those who fall short of humanly imposed religious standards are not only violating the fundamental definition of God as love, they are, in pitting the wrath of the Father against of the compassion of the Son, violating the revelation of the unity of Father, Son and Holy Spirit. According to some theological presuppositions, in order to place justice on the divine throne, justice must be presumed to trump God’s love in the end. That is, God may desire to forgive those who in some way are deemed to have fallen short, but he can’t—his justice compels him to send such poor souls to eternal torture. This belief and teaching bifurcates the very nature of God, separating his very essence.

In order to advance their own sense of retribution and satisfaction, theological lynch mobs have to place God’s love and justice in tension. They must set God against himself! But the Bible insists that the matter is not love or justice—it is not either/or, but both/and. And the Bible insists that love triumphs over all! The gospel is good news because God’s love is unalloyed, infinite and relentless.